As top Republicans see it, a medical malpractice crisis is threatening U.S. health care: Frivolous lawsuits are driving up malpractice insurance premiums and forcing physicians out of business. Doctors and hospitals live in fear of litigation, ordering excessive tests and treatments that make health care unaffordable for Americans.

That’s why Republican House Speaker Paul Ryan and Rep. Tom Price, tapped to be the nation’s top health official by President-elect Donald Trump, are vowing to make tort reform a key part of their replacement plan for the Affordable Care Act.

But, according to researchers and industry experts, the reality doesn’t match the GOP rhetoric. They say the nation’s medical malpractice insurance industry is running smoothly and the last crisis dates back more than a decade.

Doctors are paying less for malpractice insurance than they did in 2001 — without any inflation adjustment, according to the Doctors Company, one of the nation’s largest malpractice insurers. And the rate of claims has dropped by half since 2003.

“It’s a time of relative calm and this hasn’t been a front burner issue or crisis,” said Nicholas Pace, a researcher who studies the civil justice system at the Rand Corp., a nonprofit think tank. “But now Republicans see an opportunity to make changes they have wanted for a long time as they replace Obamacare.”

Their proposals would make it easier for doctors to defend themselves in malpractice cases and raise the burden of proof on patients claiming to have been injured. Many Republicans also back sharp limits on damage awards, often citing California’s landmark law capping noneconomic damages at $250,000 as a national model.

Price, an orthopedic surgeon in the Atlanta area for more than 20 years, has long championed “lawsuit abuse reform” as a way to reduce the nation’s runaway health spending.

“We waste hundreds of billions of dollars due to lawsuit abuse in this country and the practice of defensive medicine,” Price said in June at a press conference to promote the House Republicans’ replacement plan for the health law. “Instead of just putting a Band-Aid on it, we propose a bold and robust solution.”

But any such savings are vastly overstated, experts say. They warn that Republicans risk going too far in reducing consumer access to the justice system and fair compensation for medical mistakes.

Some academics and consumer advocates say the GOP political agenda isn’t addressing the bigger goal of reducing overall patient harm. This year, researchers estimated that medical errors claim more than 250,000 lives annually, which would make it the nation’s third-leading cause of death behind heart disease and cancer.

“What strikes me about these current proposals is that they really represent the agenda of medical professionals, which is all about limiting liability,” said Michelle Mello, a Stanford University law professor and health researcher. “To take any malpractice reform seriously, it has to offer something to improve the situation of patients and lead to safer outcomes.”

Although the costs are tough to quantify, studies suggest that about 3 percent of the nation’s $3.2 trillion in health care spending, nearly $100 billion, is related to malpractice cases and defensive medicine (ordering unnecessary tests and treatments to protect against litigation). That’s a considerable sum, but researchers have found that stronger legal protections don’t necessarily change physician behavior and produce less expensive care.

House Republicans contend the costs are far greater — more than $300 billion annually. In a 2010 interview, Price went even higher, suggesting that defensive medicine accounted for a quarter of all U.S. health care spending.

Now Price and a Republican-controlled Congress are in a position to put their ideas for tort reform into law. Limits on malpractice damages are a perennial favorite of conservatives who say the current system merely serves trial lawyers fishing for a big payday.

Price’s proposed legislation for replacing the Affordable Care Act doesn’t include a cap on damage awards. But he has supported Ryan’s “Better Way” plan that specifically cites the pioneering financial limits imposed in California as an effective solution.

California and other states “have shown that such reforms result in an increase in doctors, increased access to specialists, and reduction in medical liability insurance premiums,” Ryan’s plan says.

More than 30 states already have some form of cap on damages in malpractice suits. To varying extents, both industry officials and researchers credit state efforts to rein in litigation and payouts with helping to contain costs. Insurers say they’re doing well but would welcome tort reform at a national level.

Researchers caution that caps are hardly the only factor in keeping premiums down, saying economic cycles and insurers’ investment returns are also important forces. And they note that courts have struck down caps in some states as ineffective or unconstitutional.

The caps “have some modest effects on costs, but it comes at a price of people being able to access the civil justice system,” Mello said.

Caps on noneconomic damages for “pain and suffering” can also disproportionately hurt women and the elderly, who more often can’t get significant economic damages because they aren’t big wage earners.

California imposed its cap of $250,000 on noneconomic damages in 1975 and it has never been increased to keep pace with inflation.

A Rand study examined the outcomes in 257 medical malpractice trials in California during the late 1990s. The cap was triggered in nearly half of the cases that plaintiffs won, and the overall amount of damages was cut by 30 percent, from $421 million to $295 million.

That state law wiped out most of a $7 million jury award for noneconomic “pain and suffering” damages to the family of Steven Olsen in 1994. At 2 years old, Steven suffered brain damage and went blind after his doctors failed to administer a scan that would have detected an abscess on his brain, his family said.

Scott Olsen, Steven’s father, said he left his job recently as a technical writer in Chula Vista, Calif., to care for his 26-year-old son, who can’t feed or dress himself.

The family received $4 million in economic damages as part of the litigation. But Scott Olsen said “it’s immoral that a jury doesn’t get to decide the severity of the injury.” He said those damage awards hold medical providers accountable and help prevent the same mistakes from hurting more patients.

A 2014 ballot measure that would have raised the California cap to more than $1.1 million failed to pass, garnering support from only a third of voters. 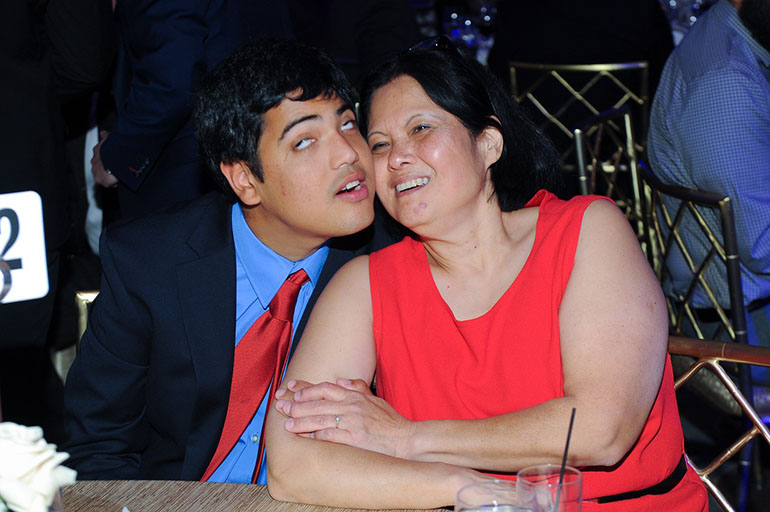 Steven Olsen and his mother, Kathy, in 2015. A California cap wiped out most of a $7 million jury award for noneconomic damages to the Olsen family. At 2 years old, Olsen suffered brain damage and went blind after his doctors failed to detect an abscess on his brain. (Photo courtesy of the Olsen family.)

Another key proposal from Price calls for establishing clinical practice guidelines for physicians to follow and use to defend malpractice claims — an idea that has attracted bipartisan support in the past.

“If your doctor does the right thing for a given diagnosis or a given set of symptoms, they ought to be able to use it as an affirmative defense in a court of law,” Price said in June at an event sponsored by the conservative American Enterprise Institute.

Experts say that only about 15 percent of malpractice cases would be affected by the adoption of clinical guidelines.

Price also has a more controversial proposal — to fund the creation of state-run tribunals to rule on injury claims. It would require patients to prove gross negligence by doctors, a higher legal standard than in civil court, and would create panels of medical experts to screen cases for merit.

Given all the competing assertions and proposals out there, and differing views even among Republicans, health policy experts urge a cautious approach on tort reform.

“You need solid empirical evidence before you move forward on national malpractice reform, not anecdotes or horror stories from a particular county in western New Hampshire,” said Rand’s Pace. “That is not how you decide to overhaul the entire system.”