LOS ANGELES — Several staff members of a small community health clinic in L.A.’s historic Chinatown spoke on the phone with patients Tuesday while wearing face masks that muffled their voices.

The masks are a recent phenomenon at the clinic, located inside the Chinatown Service Center, a nonprofit community assistance organization that serves mainly Chinese immigrants. 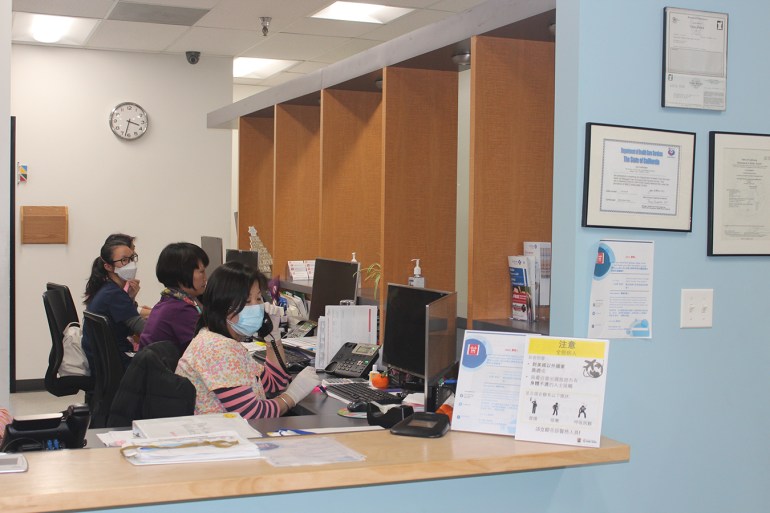 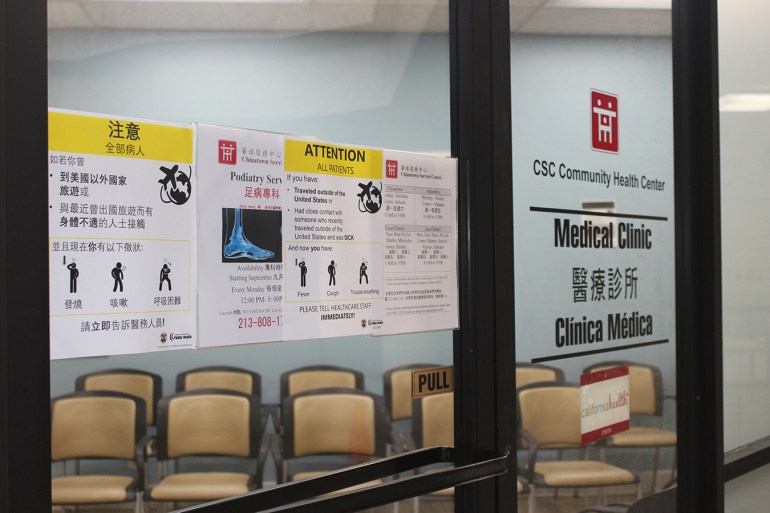 Bright-yellow warning signs instruct patients to tell staff immediately if they have just traveled out of the U.S. and are experiencing cough or fever or are having trouble breathing. (Anna Almendrala/California Healthline)

“Fear, at this moment, is the greatest epidemic that we have,” Aguilar said.

As China grapples with the growing coronavirus outbreak, Chinese people in the Los Angeles area — home to the third-largest Chinese immigrant population in the United States — are encountering a cultural disconnect as they brace for a possible spread of the virus in their adopted homeland.

The use of face masks is common in China, to protect against both germs and pollution. But when Chinese immigrants wear them in the U.S., it often conflicts with guidance from officials, who warn that they offer minimal protection and could lull wearers into a false sense of security. It can also draw suspicious gazes from passersby.

“In the U.S., if you’ve got a mask, people will sort of look at you like you’re doing something unusual, whereas in Asia it’s fairly common to do this, and people don’t give it a second thought,” said Dr. Bryant Lin, co-director of the Center for Asian Health Research and Education at the Stanford University School of Medicine.

Alhambra Unified School District in Los Angeles County, where a significant proportion of students are from Mandarin-speaking families, is getting a lot of pushback against school rules that ban face masks for students, said Toby Gilbert, a spokesperson for the district.

“There is no evidence that the mask-wearing in a school setting does anything but create fear,” Gilbert said. “It keeps people from remembering that the primary defense is hand-washing.”

The Los Angeles County Office of Education, which encompasses 80 school districts, notes that the U.S. Centers for Disease Control and Prevention and the L.A. County Department of Public Health do not recommend the use of masks for preventive purposes. It reiterates the view of the county health department that there is “no immediate threat to the general public and no special precautions are required.”

Nonetheless, local stores have run out of masks. 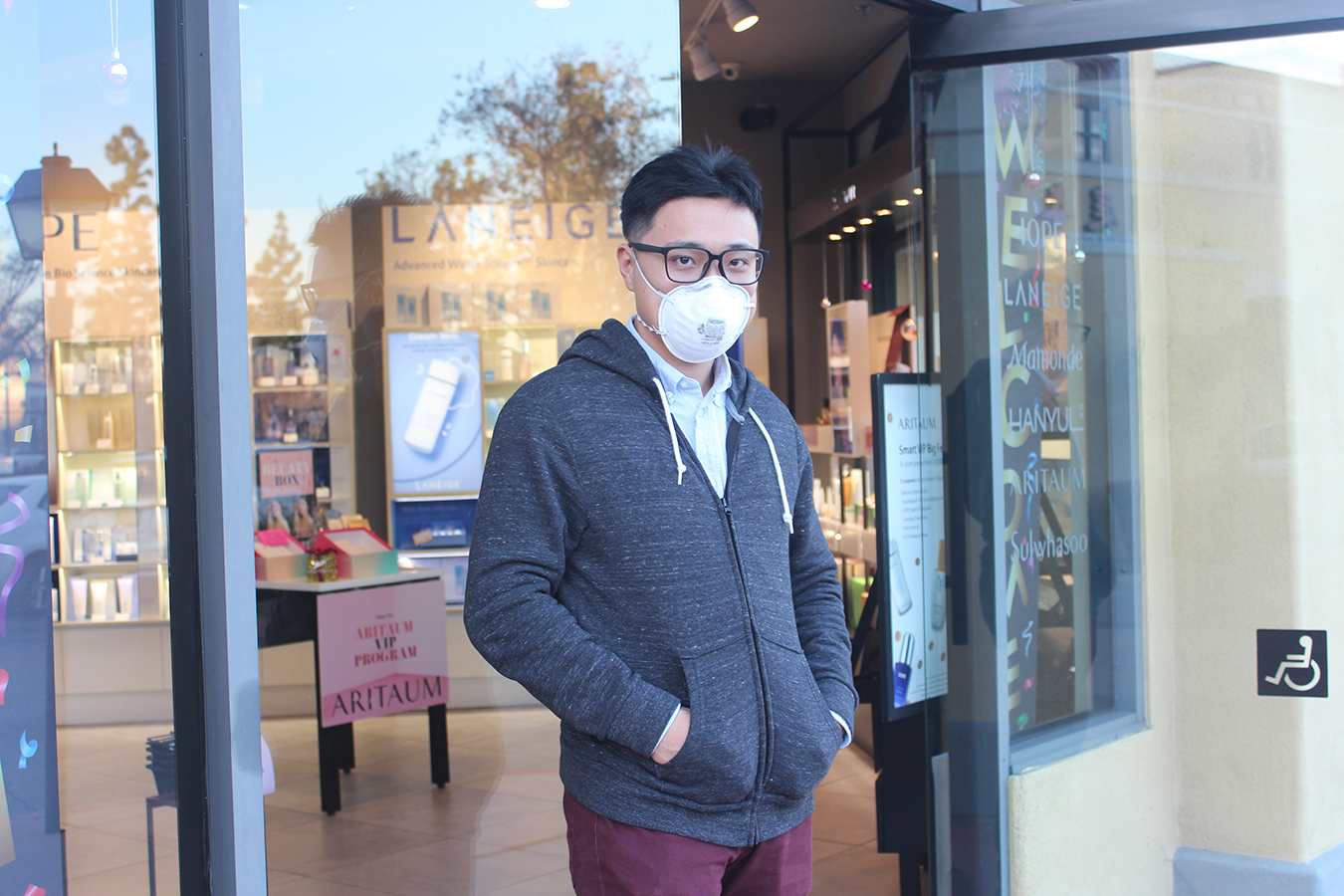 Mike Mai says he wears a face mask for his own protection. Mai was shopping with his girlfriend at San Gabriel Square, a shopping center anchored by a 99 Ranch Market and dominated by restaurants, cafes and stores that cater to San Gabriel Valley’s large Chinese community.(Anna Almendrala/California Healthline)

Mike Mai, 29, a recent transplant from Boston, wore a mask Tuesday as he shopped with his maskless girlfriend at San Gabriel Square, an outdoor shopping center in the San Gabriel Valley, which has a high concentration of Chinese immigrants.

Mai said he wore the mask for “personal protection,” asserting that local public health officials didn’t seem sufficiently concerned about the new virus despite the confirmed cases in California.

“They seem to think it has limited contagious levels, which is not true from what I’ve read in Chinese news outlets,” he said. “Apparently there have been cases where people show no symptoms, but then test positive for carrying the virus. It’s a concern to me.”

The concern is understandable: Many Chinese immigrants in this community regularly fly back and forth between the U.S. and China, or are in close contact with people who do.

The rumor mill is working overtime, as friends text each other unverified reports of people recently returned from China whom they suspect of having the virus.

So far, the number of confirmed coronavirus cases in the United States, including the two in Southern California, stands at five. On Wednesday, a plane evacuating more than 200 Americans from Wuhan, China, the epicenter of the outbreak, landed at March Air Reserve Base in Riverside County, Calif. The passengers were screened before transport and will be monitored for signs of the virus for two weeks, which is thought to be the virus’s incubation period.

Joe Lee, training and technical assistance director at the Association of Asian Pacific Community Health Organizations in San Leandro, urged officials and the public to refrain from criticizing families who send their children to school with masks.

“Instead of blaming the Chinese American community for spreading fear, we really encourage the general public to practice cultural humility,” Lee said.

Cherry Tang, who leads young adult ministries at Sunrise Christian Community in Rosemead, a largely Asian city just east of Los Angeles, worries about a shortage of masks. Tang, 29, said that as soon as she can get more masks, she wants to put them, along with hand sanitizer, in the part of the church that is open to the public.

“Maybe we should have some regulations, or remind people if they’ve just come from China within the last 14 days, they should put a mask on,” Tang said. “We shouldn’t treat them differently, but we should still be cautious about it.”