This story is part of a partnership that includes Wisconsin Public Radio, NPR and Kaiser Health News.

Bob Hall was recovering from yet another surgery in March 2014 when a volunteer walked into his hospital room. It had been a rocky recovery since his lung transplant three months earlier at the William S. Middleton Memorial Veterans Hospital in Madison, Wis.

The volunteer wasn’t there to check on his lungs or breathing. Instead, she asked Hall if he wanted to tell his life story.

Hall served in the Marine Corps during the Vietnam War. After the war, he had a political career as a Massachusetts legislator, and then led professional associations for 30 years.

“I’m anything but a shy guy, and I’m always eager to share details about my life,” Hall said, half-jokingly.

Hall, who was 67, spoke to the volunteer for over an hour about everything from his time as a D student in high school (“I tell people I graduated in the top 95% of my class”) to his time in the military (“I thought the Marines were the toughest branch and I wanted to stop the communists”). He finished with the health problems that finally landed him in the hospital, and brought him to the present day.

The interview was part of a program called My Life, My Story. Volunteer writers seek out vets at the hospital like Hall, and ask them all about their lives. Then they write up a thousand-word biography, and go over it with the patient, who can add more details or correct any mistakes.

“Of course, being a writer I rewrote the whole thing,” Hall confessed with a smile.

When the story is finished, it’s attached to the patient’s electronic record, where a doctor or nurse working anywhere in the Veterans Affairs medical system can read it.

Today more than 2,000 patients at the Madison VA have shared their life stories.

Project organizers say it could change the way providers interact with patients.

Clinicians can access a lot of medical data through a patient’s electronic medical record, but there’s nowhere to learn about a patient’s personality or learn about her career, passions or values, said Thor Ringler, who has managed the My Life, My Story project since 2013.

“If you were to try to get a sense of someone’s life from that record, it might take you days,” Ringler said. 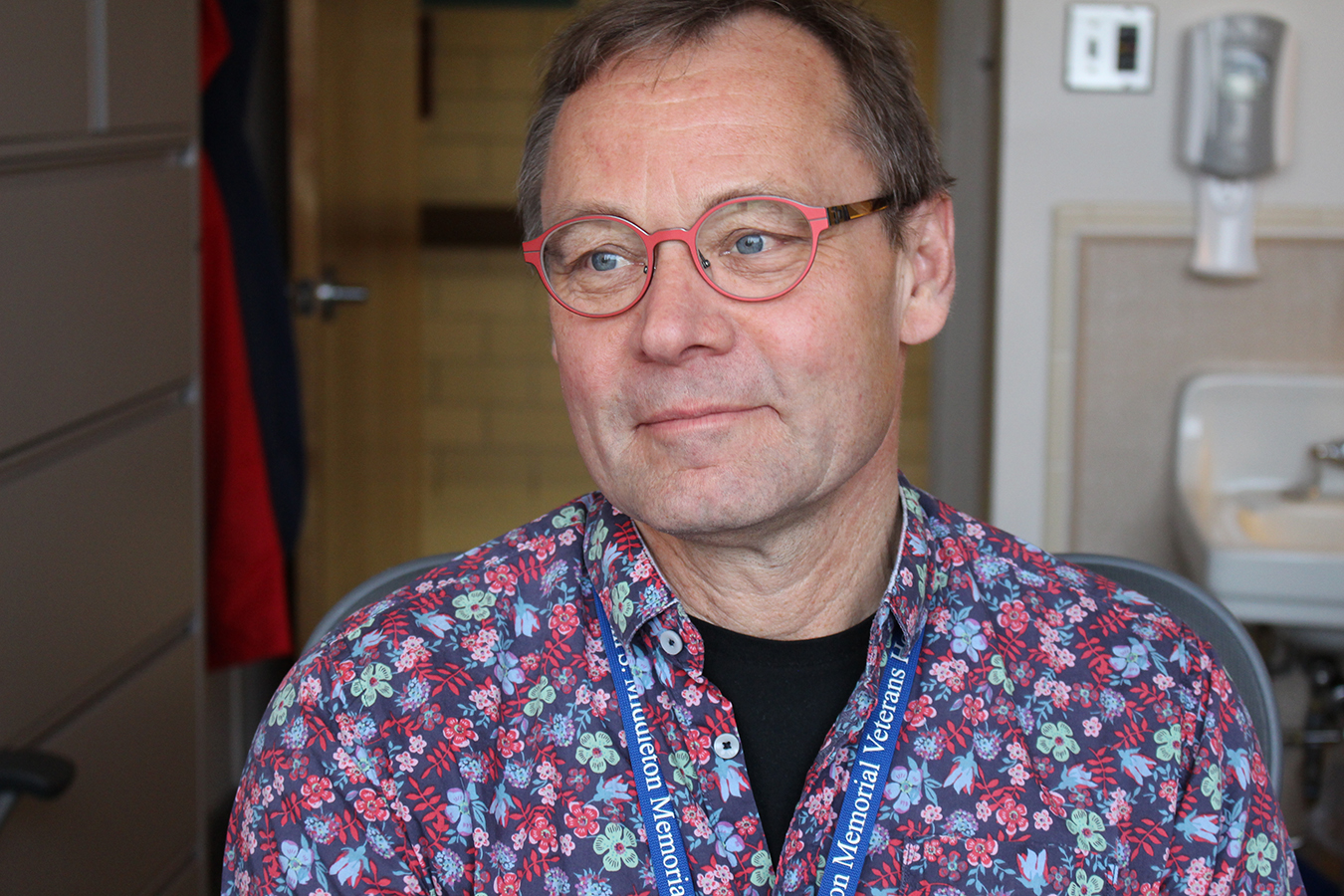 Thor Ringler has run the My Life, My Story program at the Madison VA since 2013. In that time, the program has written the life stories of more than 2,000 veterans at the hospital and placed them in their electronic medical records. (Bram Sable-Smith for NPR)

The idea for My Life, My Story came from Dr. Elliot Lee, a medical resident who was doing a training rotation at the Madison VA in 2012. The typical rotation for medical residents lasts only about a year, so Lee wanted to find a way to bring new, young doctors up to speed on the VA patients. He wanted a way for them to absorb not just their health histories, but more personal pieces of knowledge.

“It seemed to make sense that the patient might know a lot about themselves, and could help provide information to the new doctor,” Lee said.

Lee and colleagues tried having patients fill out surveys, which were useful but still left the team wanting more. Next, they tried getting patients to write down their life stories themselves, but not many people really wanted to.

Finally, an epiphany: hire a writer to interview patients, and put it all down on paper.

It wasn’t hard to find a good candidate: There was a poet in Madison, Thor Ringler, who had just finished his training as a family therapist. He was good at talking to people, and also skilled at condensing big thoughts into concise, meaningful sentences.

Under Ringler’s guidance, the project has developed a set of training materials to allow other VA hospitals to launch storytelling programs. About 40 VA hospitals around the country are currently interested, according to Ringler.

In California, there’s a program at the Fresno VA, and volunteers at the Los Angeles VA are scheduled for training this summer.

Ringler estimates hospitals would need to hire just one writer — working half or full time, depending on the hospital’s size — to manage a similar storytelling program. That means the budget could be as low as $23,000 a year.

The program aims to address a perennial patient complaint that Ringler summed up this way: “I don’t get to see anybody for very long, and nobody [at the hospital] knows who I am.”

In addition to the interest from within the VA system, the idea has spread farther, to hospitals like Brigham and Women’s Hospital in Boston and Regions Hospital in St. Paul, Minn. 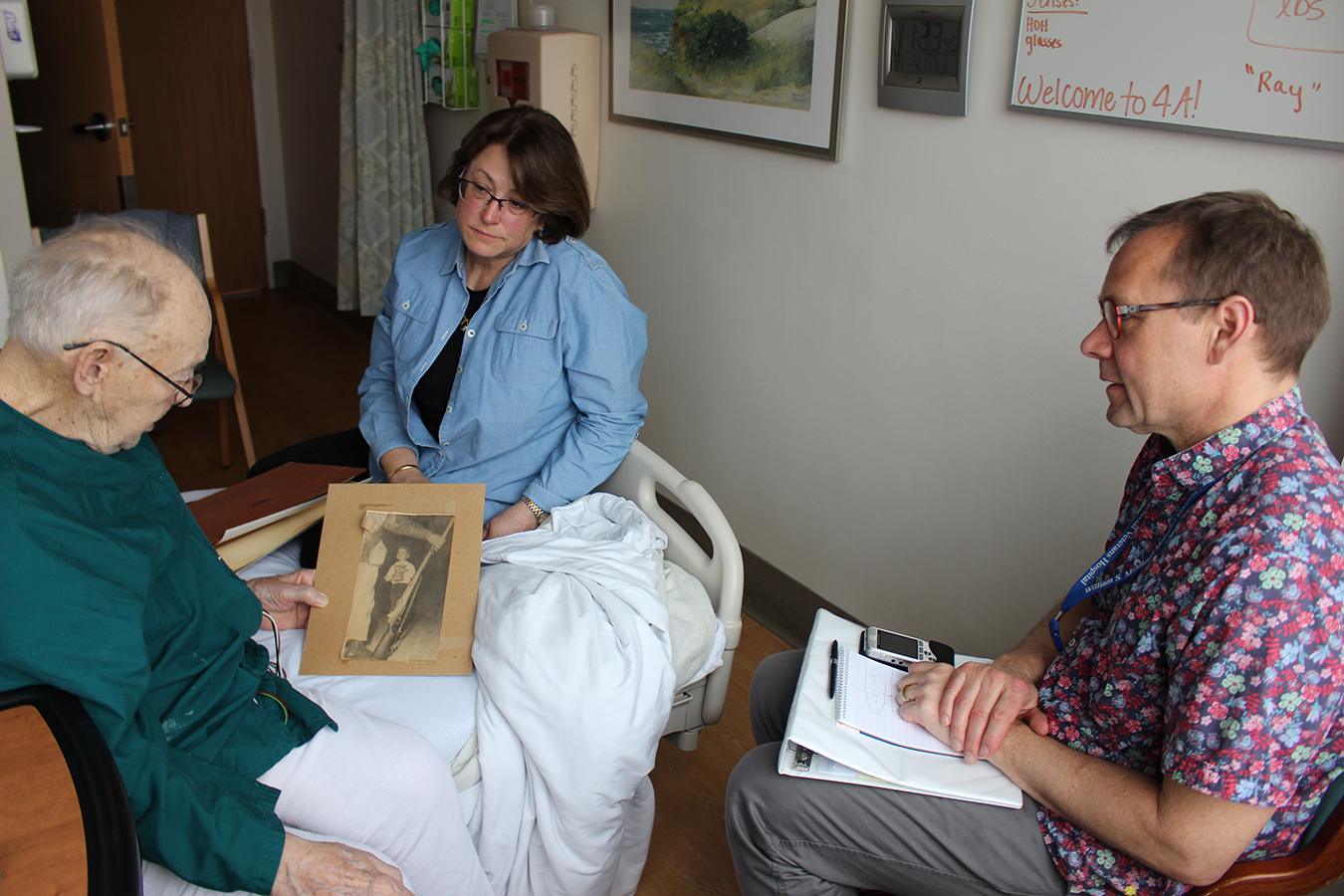 A ‘Gift’ To Doctors And Nurses

There is research that suggests when caregivers know their patients better, those patients have improved health outcomes.

University of Colorado assistant professor Heather Coats studies the health impact of biographical storytelling. She notes that a 2008 study found striking improvement in care when radiologists were simply provided with a photo of the patients whose scans they were reading.

“They improved the accuracy of their radiology read,” Coats said, “meaning less misspelled words, a better report that’s more detailed.” Current research is investigating whether storytelling might have a similar effect on clinical outcomes.

And, Coats said, the benefits of the kind of storytelling happening at the VA don’t just accrue for the patients’ benefit.

“I consider it a gift to the nurses and the doctors who are caring for the patient,” she said.

A survey of clinicians conducted by the Madison VA backed that up: It showed 85% of clinicians thought reading the biographies of patients produced by Thor Ringler’s team of writers was “a good use” of clinical time and also helped them improve patient care.

“It gives you a much better understanding about the entirety of their life and how to help them make a decision,” said Dr. Jim Maloney, the surgeon who performed Bob Hall’s lung transplant in 2013.

Maloney says knowing more about a patient’s life story makes it easier for the doctor to have difficult but necessary conversations with a patient — to learn, for example, how aggressively to respond if a complication occurs.

Maloney says the stories generated by My Life, My Story let the entire transplant team connect quickly with patients and family members, and start conversations about sensitive issues or difficult choices about end-of-life care. 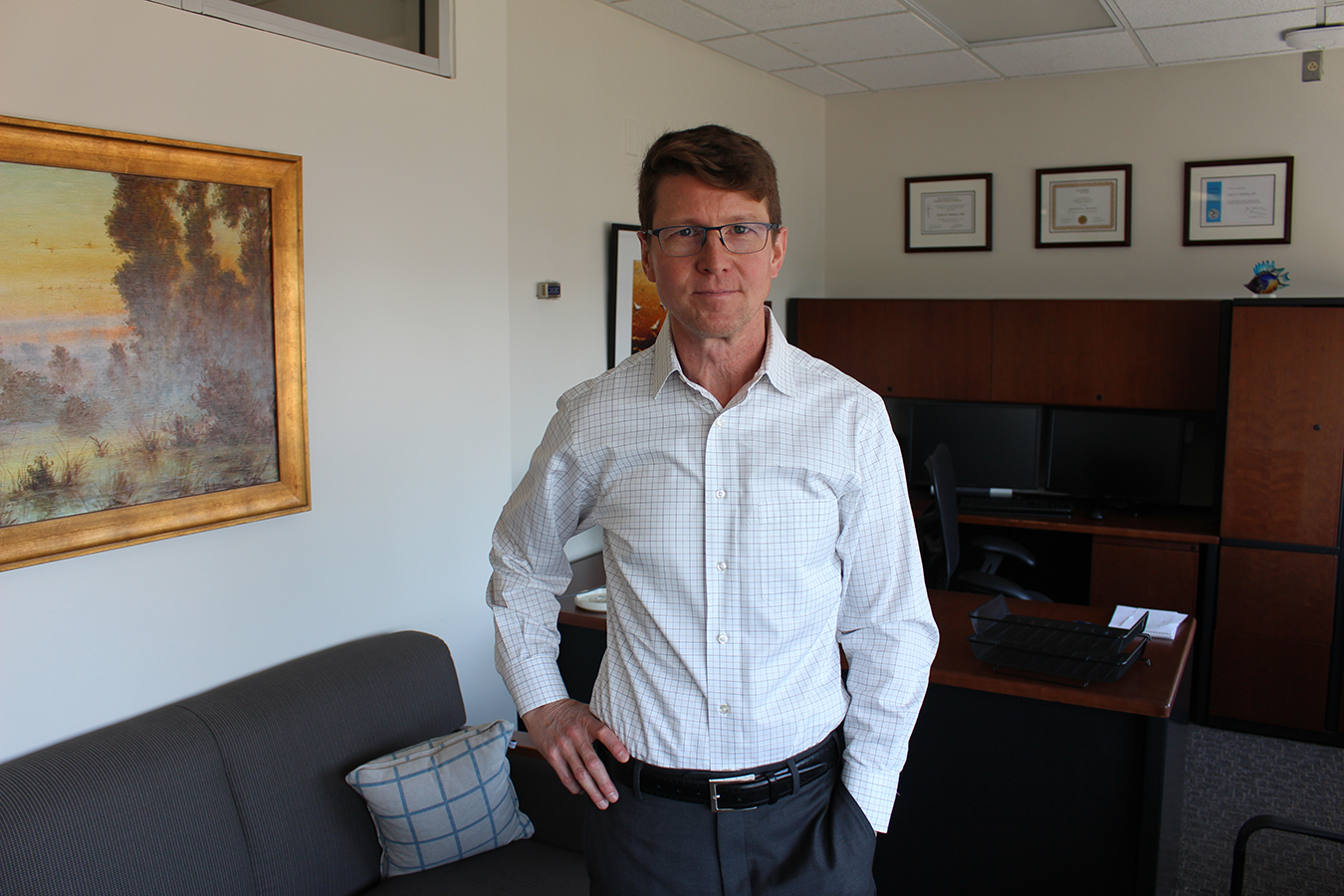 Dr. Jim Maloney, who performed Bob Hall’s lung transplant in 2013, says reading the biographies provided by My Life, My Story helps him develop better relationships with his patients. “It gives you a much better sense of the entirety of their lives.” (Bram Sable-Smith for NPR)

Dr. Tamara Feingold-Link, a second-year medical resident at Brigham and Women’s Hospital in Boston, first spotted a My Life, My Story biography when she was on rotation at a Boston-area VA.

When her attending physician asked Feingold-Link to run a meeting with a patient she barely knew — a man who was so sick he could hardly talk — his story became a powerful tool.

“It brought me to tears,” she said. “When I met his family, I could connect with them immediately.”

“It made his transfer to hospice much smoother for everyone involved,” she said.

Now Feingold-Link has started a similar program at Brigham and Women’s Hospital.

Hall has learned the stories can be meaningful to caregivers even when they’re not working. During one of his stays at the Madison VA, a nursing aide stopped by for a visit.

“She came in one night and sat down on my bed just to talk to me for a while because she’d read my story,” Hall said. “I found out later she wasn’t on the clock.”

It’s been five years since Hall’s lung transplant, and he’s doing well. He even found a part-time job putting his writing skills to work as part of the My Life, My Story team. In two years, Hall has written 208 capsule biographies of veterans.

This story is part of a partnership that includes Wisconsin Public Radio, NPR and Kaiser Health News, an editorially independent program of the Kaiser Family Foundation.