This story also ran on The Star-Ledger. This story can be republished for free (details).

BAYONNE, N.J. — For five years, Rasha Salama has taken her two children to Dr. Inas Wassef, a pediatrician a few blocks from her home in this blue-collar town across the bay from New York City.

Salama likes the doctor because Wassef speaks her native language — Arabic — and has office hours at convenient times for children.

“She knows my kids, answers the phone, is open on Saturdays and is everything for me,” she said.

But UnitedHealthcare is dropping Wassef — and hundreds of other doctors in its central and northern New Jersey Medicaid physician network. The move is forcing thousands of low-income patients such as Salama to forsake longtime physicians.

Across the nation, business and contractual disputes are separating patients from longtime doctors. This often occurs when doctors don’t want to accept the rates insurers are willing to pay. It sometimes occurs when insurers’ business plans require having a narrower network of doctors — doctors whose practice patterns may be easier to control.

But in this case, the cause of the exclusion goes to even deeper business connections: Wassef and other doctors say the insurer appears to be trying to shift patients to Riverside Medical Group, a 20-office physicians’ practice owned by Optum, a sister company of UnitedHealthcare, both of which are subsidiaries of UnitedHealth Group.  UnitedHealthcare is essentially forcing patients to transfer to doctors it controls, the doctors allege.

Indeed, several patients said the health plan directed them to Riverside when informing them their doctors were being dropped.

Lawrence Downs, CEO of the Medical Society of New Jersey, said he estimates UnitedHealthcare is trying to remove hundreds of doctors in central and northern New Jersey from its network. That is the same area where Riverside Medical operates, he noted.

“It seems like they are steering patients away from small, community-based doctors to large groups that they own,” he said.

That raises questions about whether this type of “vertical consolidation” — the term for a practice occurring across the country — is a strategy that is good for profits but bad for patients.

UnitedHealthcare said the changes are not part of a campaign to get as many patients as possible to the Riverside practice. It points out that it is retaining the community-based doctors, like Wassef, in its networks to treat its Medicare Advantage and commercial plan members.

But, experts say, traumatic disruptions in doctor-patient relationships are an inevitable result of ongoing shifts in the complicated business of U.S. health care. 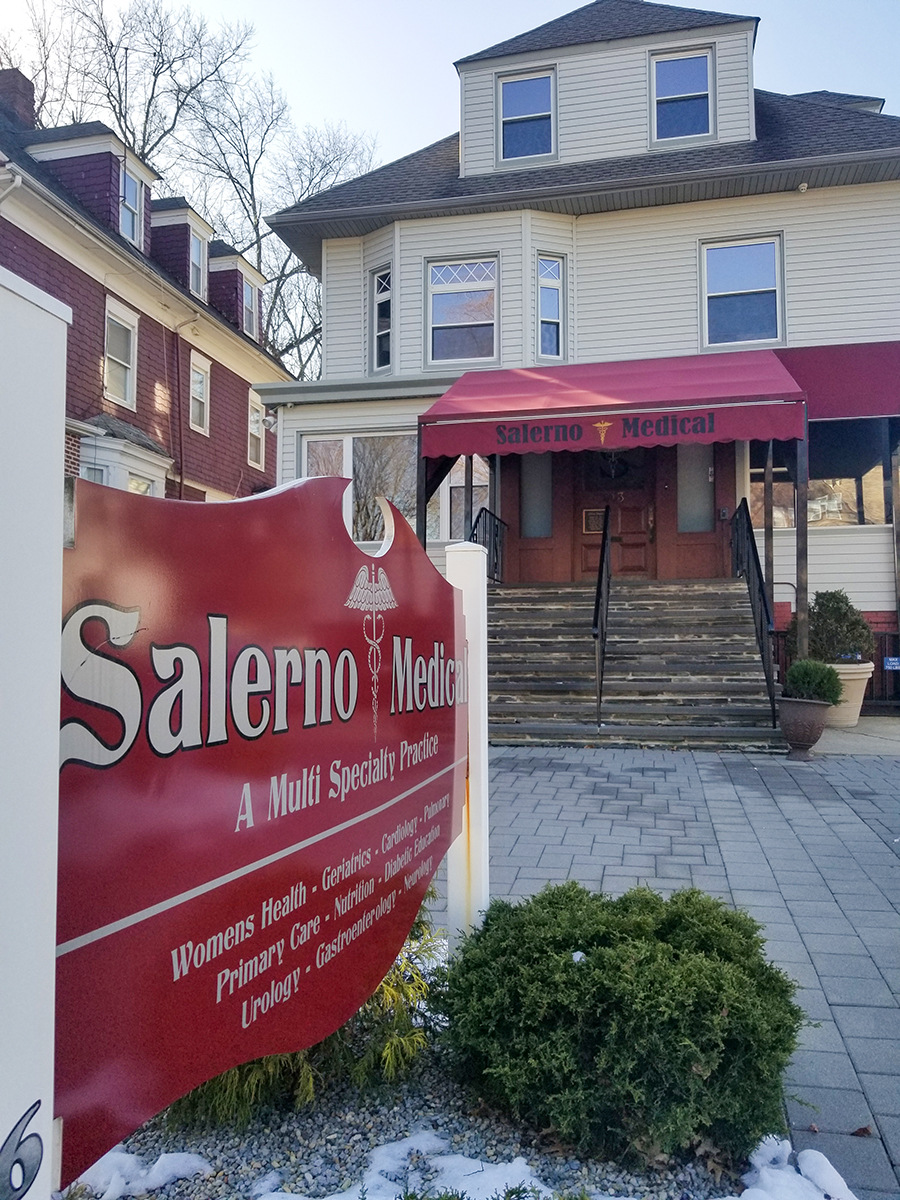 Salerno’s main office is in a three-story, 19th-century house in East Orange that his father used for his medical practice in the 1960s. About 40% of his patients are on Medicaid. (Phil Galewitz/KHN)

Facing a rapid consolidation of doctors’ practices and hospital systems — which have hefty negotiating power to demand high fees — insurers have limited options to control costs and maintain a positive balance sheet, said Jacob Wallace, an assistant professor of public health at Yale University. Medicaid plans are especially affected because, unlike commercial plans or even Medicare, they can’t increase premiums or demand copayments.

“Plans face a challenging landscape to keep costs down,” Wallace said. As a result, health plans have taken other approaches, including narrowing provider networks and buying their own physician practices, he said.

But further complicating matters, many Medicaid and Medicare managed-care programs are contracted out to private, for-profit insurers such as UnitedHealthcare. They are looking to create returns for shareholders. With surging enrollment in government programs, UnitedHealthcare has enjoyed rising profits and a stock price that has soared tenfold since 2010.

Wassef and about two dozen other physicians filed a federal lawsuit in September to get reinstated. Wassef, whose termination is scheduled in May, said the move could seriously affect her practice because 80% of her patients are insured by UnitedHealthcare.

UnitedHealthcare gained millions of new customers after the Affordable Care Act led New Jersey and 35 other states and the District of Columbia to expand Medicaid and states turned to private insurers to handle the business. Salama and some other UnitedHealthcare customers said they like their insurance plan because it offers richer benefits than other Medicaid options and covers the medications they use.

The company operates New Jersey’s second-largest Medicaid health plan, with 418,000 members. (The state Department of Human Services has blocked UnitedHealthcare from enrolling any additional Medicaid members, a severe and rare penalty. That move — which is not related to the termination of doctors’ contracts — stems from complaints related to care management and discharge planning, the health plan’s call center and other issues.)

A company spokesperson acknowledged the health plan is dropping 2% of its Medicaid doctors, saying the move was designed to help control costs.

“As health care costs continue to rise, we are working to mitigate the impact on the customers, states and members we serve by negotiating with care providers on their behalf to keep reimbursement rates affordable,” the company said in a statement. “We understand that our members have personal relationships with their doctors and that network changes can be difficult.”

New Jersey Medicaid officials refused to comment on whether they are concerned about UnitedHealthcare’s actions. But patients caught up in the standoff have reason to worry, said Linda Schwimmer, CEO of the New Jersey Health Care Quality Institute, a coalition of health plans, providers and a variety of health trade groups.

“Once you have a trusted relationship with a provider, it means a lot and it goes to the quality [of your care] because if you are seeing the same providers and you trust them, you are more likely to take your medication and adhere to whatever care plan you have,” she said. 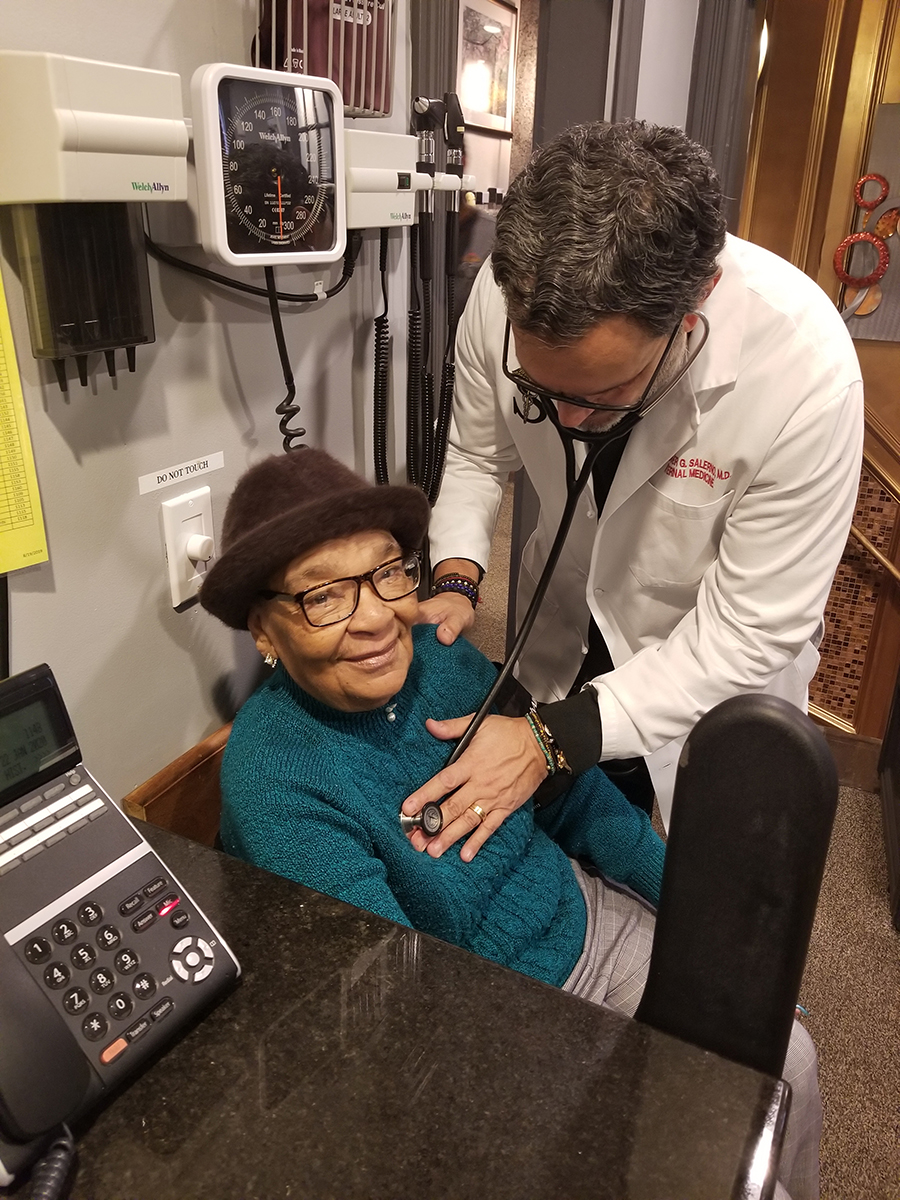 Velylia McIver switched to a new Medicaid health plan after Salerno was initially dropped by UnitedHealthcare in order to keep seeing him. (Phil Galewitz/KHN)

Dr. Alexander Salerno, an internist who runs a 17-doctor multispecialty practice in East Orange, New Jersey, another plaintiff in the lawsuit, is helping lead the court fight. Salerno’s main office is in a three-story, 19th-century house that his father used for his medical practice in the 1960s. About 40% of his patients are on Medicaid.

Until the dispute began last year, Salerno advised his patients to sign up for UnitedHealthcare because of its broad array of benefits, including vision and dental care, and because of the ease in referring to specialists.

And UnitedHealthcare never complained about this group’s skill. In fact, the group received a $130,000 bonus last year for its good care to patients. Salerno said Riverside Medical offered to buy his group practice in 2018, but he declined.

“It’s not a bad insurance company. It just seems like they have become greedy trying to control both ends of the pendulum — wanting to be the payer and provider,” Salerno said.

A federal judge ordered the case to be heard by a neutral arbitrator, which in late November granted an emergency injunction that will keep Salerno from being removed from UnitedHealthcare’s network until an arbitrator makes a decision on a permanent injunction, which is expected in March.

But that leaves patients in limbo.

Glorida Rivera, 68, said UnitedHealthcare’s decision to drop Salerno was upsetting because she relied on him to care for her diabetes, thyroid and heart conditions. She credits Salerno for referring her to a cardiologist, who put stents in her heart to clear a blockage.

“He knows my whole story, so why do I have to change?” wondered Rivera. Nonetheless, she is sticking with UnitedHealthcare.

Velylia McIver, 83, decided in November to search for another plan so she could stay with Salerno. But it took her more than a month to get coverage for some medications.

“I feel caught in the middle of all this, and it’s the pits,” McIver said.