SACRAMENTO, Calif. — Kellen Willhite was 24 when he learned he’d been exposed to HIV. What followed was, as he describes it, a second trauma: trying to obtain the drugs that could save him before it was too late.

In 2016, a day after Willhite and his then-boyfriend had engaged in unprotected sex, they visited the small offices of Golden Rule Services, a nonprofit community clinic about 7 miles south of the state Capitol.

“I had a gut feeling,” Willhite said. He wanted his boyfriend to be tested. The test result came back positive for HIV, and Willhite learned that he needed to start taking a medication known as post-exposure prophylaxis, or PEP.

“I was terrified. I was crying because the clock was ticking. You have to start PEP within 72 hours of exposure,” Willhite said. A counselor at Golden Rule advised him about the drug and sent him to an emergency room, where he waited for a long time before being redirected to his primary care doctor for a prescription. The doctor was not in his office.

Eventually, Willhite got his prescription for the full month-long course of treatment, and later he moved to daily doses of anti-HIV pre-exposure prophylaxis, or PrEP. But he remembers the process as “a nightmare.”

A new California law, the first of its kind in the nation, is designed to avoid precisely the kind of stress Willhite endured after learning of his HIV exposure — and to eliminate obstacles for people looking for longer-term protection against the virus.

The law, SB-159, eliminates mandatory doctor visits and bars insurance companies from requiring prior authorization for the drugs. Pharmacists who take a special training course can dispense PEP and PrEP directly to patients without a physician’s prescription, beginning in July.

In signing the bill last month, California Gov. Gavin Newsom applauded the state legislature for “getting us close to ending HIV and AIDS for good.”

Among people working to halt the epidemic, the response has been more guarded. They say bypassing the prescription process is a welcome development, but it does not address all the barriers to access. Unless it is accompanied by cost control, education and relentless outreach to at-risk residents, they argue, it may not make the difference the bill’s supporters hope to see.

“We view this [bill] as one part of a broader access issue,” said Courtney Mulhern-Pearson, director of policy and strategy at the San Francisco AIDS Foundation. “It’s a piece of the puzzle.”

PrEP, marketed and sold by Foster City, Calif.-based Gilead Sciences under the brand name Truvada, is a single pill which, when taken daily, is up to 99% effective at reducing the risk of contracting HIV through sex, according to the Centers for Disease Control and Prevention. The prevention rate on PrEP among those who inject drugs is 74%. (The U.S. Department of Health and Human Services says that PEP, a combination of several different oral drugs, is very effective at preventing HIV infection post-exposure, but “not 100%.”)

Despite PrEP’s effectiveness, fewer than 40,000 of the estimated 220,000 to 240,000 state residents who could use it are taking the medication, according to the California Health Benefits Review Program, which analyzed the state law.

It estimated that PrEP and PEP usage would increase by 2% in the first year of the new law but, after that, barriers such as lack of reimbursement for patient counseling and lab tests could limit increases in its use.

Medical professionals who work with HIV pose tough questions about the law’s potential limitations: How many pharmacies will undertake the training necessary to act as dispensaries, and will they be evenly distributed around the state? What about people who can’t afford it? What will patients do when their maximum allowed prescription-free PrEP dosage — 60 days — runs out?

The 60-day limit was a compromise that induced the California Medical Association and other lobbies to drop their opposition to the legislation. It means those who wish to continue the regimen will have to make primary care visits before their 60-day supply runs out. Doctors say it’s important for people on Truvada to be monitored anyway, given the drug’s potential side effects on kidney and liver function and bone density.

State Sen. Scott Wiener (D-San Francisco), a co-sponsor of the law who revealed in 2014 that he uses PrEP every day to remain HIV-negative, noted that there are places in California where getting a prompt doctor’s appointment can be difficult. Being able to start PrEP or PEP without a prescription at least buys some time, he said.

One thing the law cannot address is how to get the drugs to the people at the highest risk: black and Latino men who have sex with men. Those two groups have the highest rates of new HIV cases nationally. 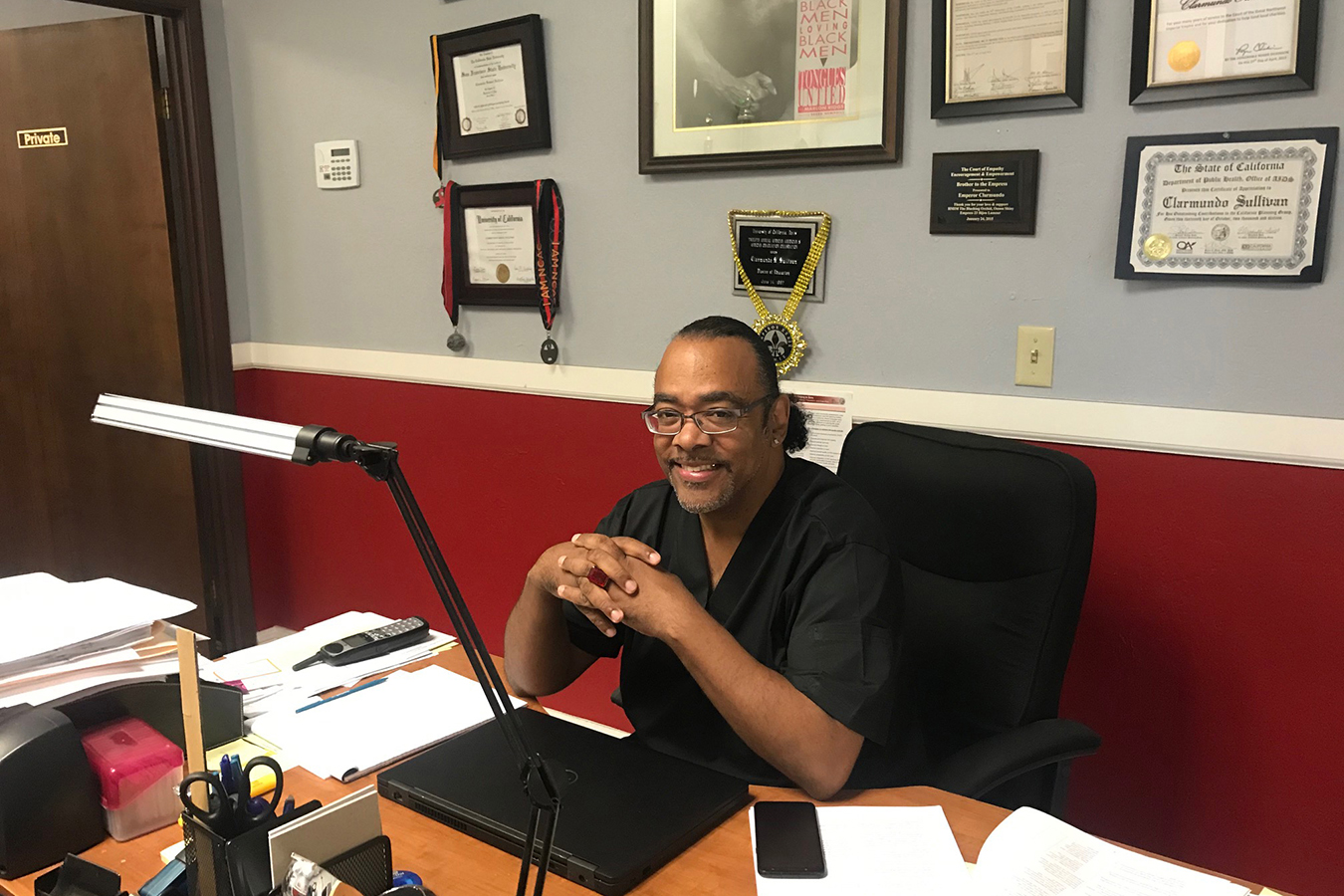 As the executive director of a nonprofit that offers free HIV testing, Clarmundo Sullivan says he works consistently with clients who aren’t even aware of the anti-HIV drug regimens PrEP and PEP, much less how to access them.(Mark Kreidler for California Healthline)

“This legislation is really, really important, but it’s slightly negligent in its approach,” said Clarmundo Sullivan, executive director of Golden Rule Services, where Kellen Willhite first learned he’d been exposed to HIV. “We have to do a better job of educating and reaching out to that high-risk community, to demystify what PrEP is. We’re still seeing very low uptake among people of color.”

An important factor behind the low use, and not just for people of color, is the cost of PrEP. The full price for Truvada is nearly $20,000 a year, and although Gilead and many states have programs in place to help defray the cost, a lot of people still have trouble affording it.

Willhite, who initially had a copay of $40 for PrEP with insurance he got through his mother, now has similar copays on an employer plan — and he knows he’s lucky. “I know people who are paying hundreds of dollars a month,” said Willhite, who now works at Golden Rule, three years after he first walked in there worried about HIV.

The month-long regimen of PEP runs between $600 and $1,000 without insurance.

Another financial hindrance, one built into the law, is a requirement to show you have tested negative for HIV within the past seven days before you can obtain PrEP without a prescription.

Golden Rule Services tests patients for free, as do many nonprofit clinics and county health departments in California. “But how many people in the community even know that?” Sullivan said. “Some of our clients are sharing with us that it’s costing them up to $250 to get an HIV test at certain places.”

There are other potential obstacles. A California Department of Insurance investigation found this year that some life, disability and long-term care insurance companies were denying coverage to people on PrEP, or hiking their premiums, which could have a chilling effect on its use.

In the end, said Golden Rule’s Sullivan, only aggressive outreach will lead to wider use of HIV-prevention medications. “It takes time, it takes money, it takes vulnerability, because you’re sharing very, very sensitive information,” he said. “The bureaucracy that’s involved has frustrated a lot of people.”

New California Law May Expand Use Of HIV Prevention Drugs, With Caveats