Claire Haas and her husband are at a health insurance crossroads.

If they were single, each would qualify for a federal tax credit to help reduce the cost of their health insurance premiums. As a married couple, they get zip.

“We talk about getting divorced every time we get our health care bills,” said Haas, 34, of Oakland. She has been married to her husband, Andrew Snyder, 33, for two years.

“We kind of feel like we messed up. We shouldn’t have gotten married.”

The couple pays about $900 in monthly premiums — which adds up to about 14% of their annual income, said Haas, a self-employed leadership coach and consultant. Snyder is an adjunct professor of ethnomusicology.

Under a proposal by Gov. Gavin Newsom, an estimated 850,000 Californians could get help paying their premiums, including people like Haas and Snyder, who together make too much to qualify for federal financial aid but still have trouble affording coverage.

To pay for the health insurance tax credits, the Democratic governor is proposing a tax penalty on Californians who don’t have health insurance — similar to the unpopular federal penalty the Republican-controlled Congress eliminated, effective this year.

If Newsom’s $295 million plan is enacted, California would be the first state to offer financial aid to middle-class families who have shouldered the full cost of premiums themselves, often well over $1,000 a month.

“This is a gap in the Affordable Care Act, but there’s been no action at the federal level,” said Matthew Fiedler, a fellow with the USC-Brookings Schaeffer Initiative for Health Policy.

Democrats in Congress introduced legislation this year to expand the federal subsidy to more people, but those efforts have stalled in the past in the face of Republican opposition.

In California, legislators are debating Newsom’s penalty and tax credit proposals as part of budget negotiations, which must be wrapped up by June 15. Democrats control the legislature, but Republicans and taxpayer groups are opposed to the proposed penalty, saying people should have a choice about whether to buy insurance.

“It’s a very costly and regressive tax on young people who can’t afford it,” said David Wolfe, legislative director of the Howard Jarvis Taxpayers Association. “They likely aren’t going to get sick, and they want to take that chance.”

If lawmakers approve a state tax penalty, modeled after the now-defunct ACA mandate, some Californians could owe thousands of dollars if they fail to buy insurance.

“Without the mandate, everybody’s premiums go up,” Newsom said at an event in Sacramento in early May. “Every single person in this state will experience an increase in their costs if we don’t have a diversified risk pool.”

Massachusetts and Vermont provide state financial aid to low-income people who qualify for federal aid under the ACA, according to the USC-Brookings Schaeffer Initiative for Health Policy. Newsom wants to go a step further and give financial help to middle-income earners — which could include families of four earning up to about $154,500. 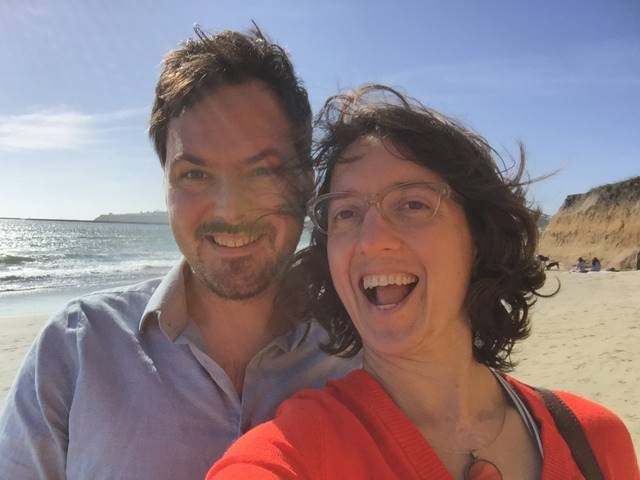 Claire Haas and Andrew Snyder of Oakland would qualify for federal financial aid to help pay for their health insurance premiums if they were single, but as a married couple, they don’t receive any assistance. “We talk about getting divorced every time we get our health care bills,” Haas said.(Courtesy of Claire Haas)

The average household tax credit in this category would be $144 per month, according to Covered California.

Exactly how much Californians could receive would vary depending on where they live, their ages, incomes and family size, said Peter Lee, Covered California’s executive director.

That couple could qualify for a $1,613 state tax credit under Newsom’s proposal, lowering the cost of health insurance to about 13% of their income, according to a Covered California analysis.

By comparison, the ACA defines an affordable employer-sponsored health plan as one that costs about 9.5% or less of an employee’s household income.

California’s high premium costs are among the biggest concerns middle-income customers raise with Kevin Knauss, an insurance agent in the Sacramento region.

“I have clients, especially those who are self-employed, who have literally discussed the possibility of not working for two or three months or stepping back from projects” so they can earn less and qualify for federal tax credits, Knauss said.

Other insurance agents said they’ve met middle-income families who are willing to forgo insurance for one family member — often the breadwinner — to bring down costs.

Alma Beltran, a small-business owner in Chula Vista, Calif., doesn’t have health insurance, and neither do her husband and 17-year-old daughter.

Beltran knows it’s a risk but said the premiums this year were simply unaffordable: $1,260 a month for a plan with a whopping $13,000 deductible.

“I decided to let my business grow at the expense of my health insurance,” said Beltran, 53, who manufactures labels for the beer and wine industry. “This is the first year ever that I haven’t had health insurance.”

Such stories are why some lawmakers think Newsom’s proposal doesn’t go far enough. For instance, some households wouldn’t qualify for a state tax credit until they spent a quarter of their income on premiums.

“We’re still talking about a substantial portion of someone’s income,” said state Sen. Richard Pan (D-Sacramento). “I appreciate the governor’s leadership, but I think that we do need to more.”

The state Senate wants the governor to double the funding to about $600 million, not only by relying on the penalty revenue but by dipping into the state general fund. California is projected to have a $21.5 billion budget surplus for budget year 2019-20.

While Newsom said he supports giving consumers larger subsidies, he said his plan is fiscally responsible because it has a dedicated revenue source from the proposed health insurance penalty.

“Perfect’s not on the menu, but better than any other state in America is,” Newsom said.