The fight against the growing abuse of prescription painkillers and heroin is not robust enough at any level — from efforts by the federal and state governments to those by doctors and users themselves, according to a national poll released Tuesday.

Lack of access to care for those with substance abuse issues is a major problem, according to 58 percent of those surveyed by the Kaiser Family Foundation, based in Menlo Park. (Kaiser Health News, which publishes California Healthline, is an editorially independent program of the Foundation.)

The poll found that people had somewhat different views of heroin and prescription drug abuse. More than a third called heroin abuse an extremely serious health problem in the U.S., while just over a quarter of those surveyed said the same about the abuse of strong prescription painkillers. Fewer than a fifth regarded alcohol abuse in the same way.

Opioid abuse has generated heavy news coverage in recent months, as well as government concerns. President Barack Obama recently proposed adding $1 billion to the federal budget for treatment programs. Yet more than 60 percent of respondents generally faulted federal efforts as insufficient. Similar shares were dissatisfied with state governments’ actions and those of doctors who prescribe painkillers, the poll found.

California officials say they are stepping up efforts to curb abuse of opioids, including prescription drugs.

In this state, more than 4,500 people died from opioid overdoses in 2014, according to the latest data available from the U.S. Centers for Disease Control. The California Department of Public Health noted that in 2012, about 72 percent of opioid deaths among Californians involved prescription drugs.

In response, the public health agency in 2014 partnered with the state Department of Justice, the state medical board and other agencies to reduce prescription opioid abuse and overdoses.

The urgency of their quest to prevent opioid abuse was underscored last month when the CDC reported that an outbreak of poisonings linked to a counterfeit prescription painkiller — previously seen in the Sacramento region — had reached the Bay Area.

Despite these efforts in California and nationwide – which admittedly are little known to the public – some Californians believe that the state and the nation aren’t taking quite the right approach.

“We lean more toward punishment and less towards treatment,” of people who are addicted to opioids, said Paris Lay, a 29-year-old Los Angeles screenwriter who participated in the Kaiser Family Foundation survey. “We need to put a bigger emphasis on treating addiction rather than putting more people in jail. Other countries are more progressive with drug problems.”

Many Americans have personal experience with the drug abuse epidemic. More than four in 10 of those surveyed said they know someone who has been addicted to painkillers, and one in five said that person was a family member.

Asked about potential policy actions, more than eight in 10 called these steps very or somewhat effective:

The Kaiser survey also examined Americans’ views on issues involving access to mental health services. About one in five people surveyed said that they or someone in their family once needed mental health treatment but did not get it, for reasons that included affordability and insurance not covering it.

The poll also found that most people are unaware that the federal government requires insurance plans to provide mental health benefits and substance abuse treatment under the same rules they apply to other medical services in terms of copays, deductibles and coverage limits. About four in 10 people surveyed knew that applied to health plans and three in 10 knew that for substance abuse treatments.

The poll was conducted April 12-19 among 1,201 adults. The margin of error is +/- 3 percentage points for questions asked of the full sample. 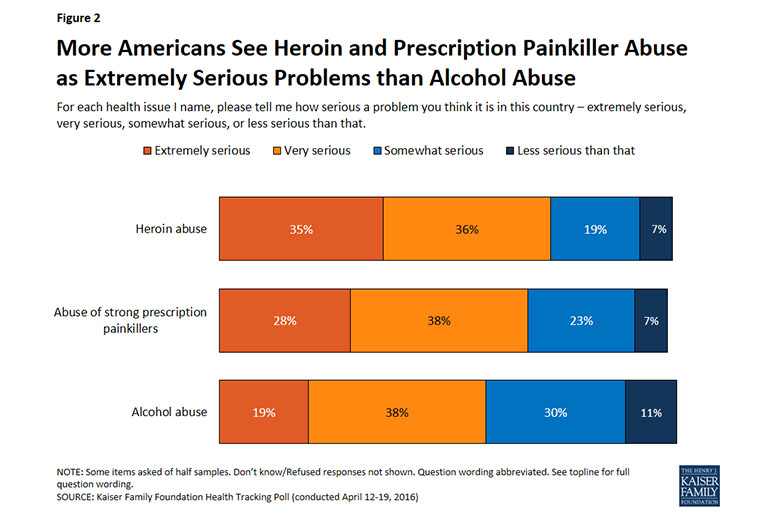 By Lisa Gillespie and Barbara Feder Ostrov May 5, 2016