Before the pandemic, fruit stands like his dotted streets on days like this, one every few blocks on the busy stretches. With millions of people staying home amid the COVID-19 pandemic, however, business was so bad that many of Salvador Morales’ fellow fruit vendors hadn’t bothered to show up.

But Salvador Morales said he couldn’t afford to stop working because his family in Guatemala counts on him to send money back home. He also needs to pay his rent. It was due last Wednesday, and he didn’t have enough to pitch in his $500 for the apartment he shares with a roommate.

With the surrounding streets mostly empty, Salvador Morales had planted himself outside a Bank of America branch ― an “essential” business that was getting relatively regular foot traffic because of the ATM.

He said that, before the coronavirus crisis, he made $700 a week working every day except Tuesday. But since customers dwindled in mid-March, he’s down to just three days and making $200 to $300 a week.

Unlike most Americans, who will soon get stimulus checks, and the approximately 10 million workers who have filed for unemployment benefits in the past two weeks, Salvador Morales does not expect assistance of any kind. 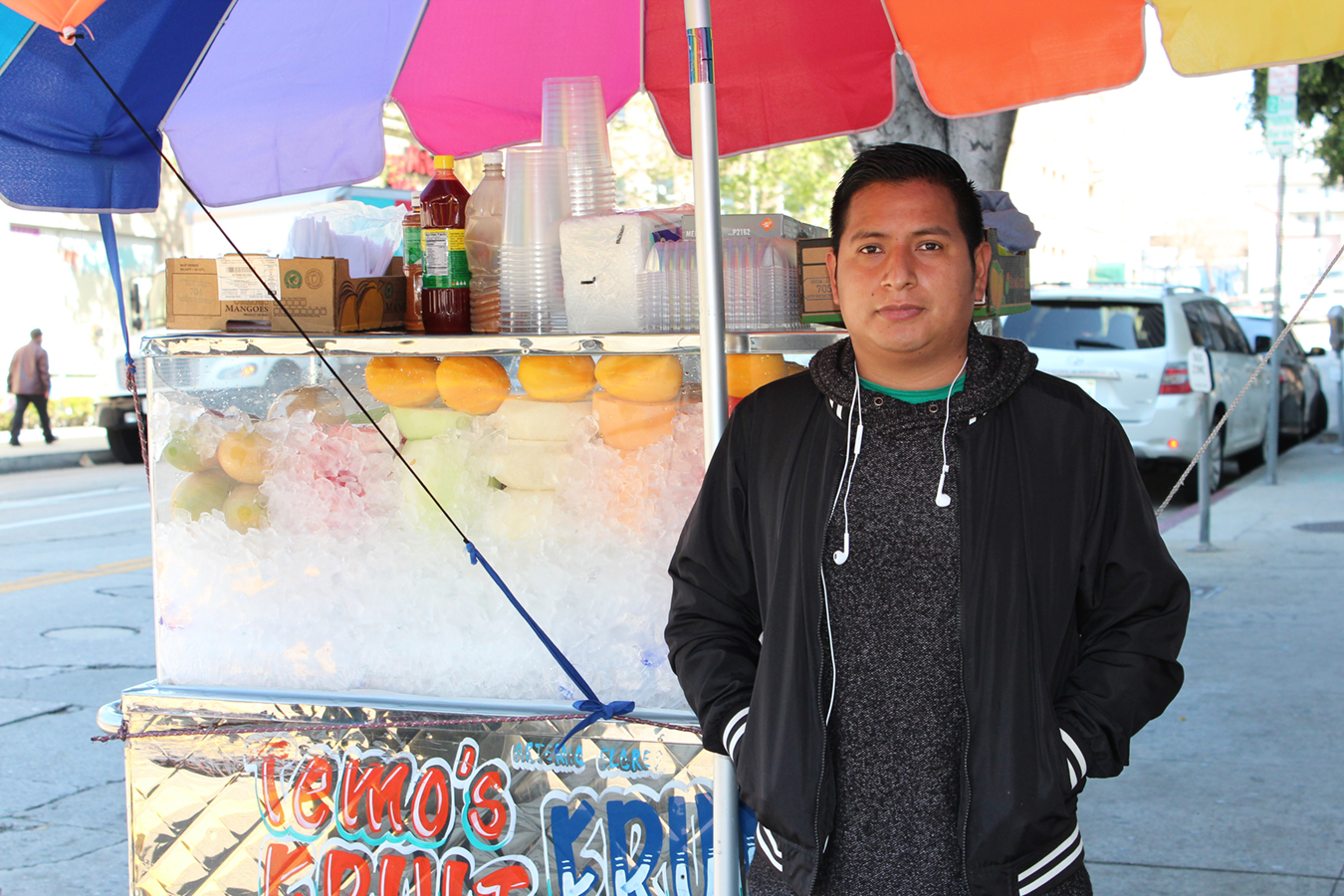 Alex Salvador Morales, 23, began noticing a decline in frutería sales in February. By the time schools closed in mid-March, business was so bad that most of his colleagues gave up vending and are sitting at home, waiting for the pandemic to pass. But Salvador Morales, the only member of his family in the U.S., must keep working. Relatives in Guatemala rely on the money he sends home, although they understand that the economy has worsened for everyone. (Anna Almendrala/KHN)

He understands these benefits are for people who are in the country legally, and his circumstances only intensify his determination to continue selling on the street, even though he fears for his health and has no insurance.

“I’ll keep working until the police say I can’t,” Salvador Morales said. “Right now, they’re not saying anything, and maybe it’s because they understand that people need to work.”

In 2019, Los Angeles had an estimated 15,000 to 20,000 sidewalk vendors, said Paul Gomez, a spokesperson for the city’s Department of Public Works.

Shutting down the economy because of the novel coronavirus has made the hardscrabble life of those vendors even harder, said Rudy Espinoza, executive director of Inclusive Action for the City, a community development nonprofit based in L.A.

“We’re taking away their ability to work, and we’re not offering another avenue to them,” he said.

Espinoza’s organization helped launch an emergency fund for workers like Salvador Morales to receive $400 on a cash card. As of Tuesday afternoon, the fund had over $130,000, bolstered by large donations from foundations and a GoFundMe campaign. But it’s not enough to accommodate the large number of people who have applied for aid.

Other organizations across California and the U.S. are also raising money for immigrants who don’t qualify for public benefits, including the San Francisco-based Mission Asset Fund and Pasadena, California-based National Day Laborer Organizing Network.

On Tuesday, California Gov. Gavin Newsom said state aid for undocumented immigrants is “being considered,” but he has also cast doubt in recent days about being able to pay for anything beyond basic government functions in the midst of a growing financial crisis.

For immigrant vendors who are U.S. citizens, the situation is difficult but not quite as dire.

Jose Rivera, 70, who has operated a flower shop near downtown Los Angeles for 37 years, was selling the last of his bouquets with the help of his niece on a virtually empty sidewalk one day last week. Because the wholesale market where he buys his flowers had already shut down, he planned to stop working and go home once he had sold his remaining stock.

Rivera can’t afford the $2,000 rent for his storefront because his income has evaporated in recent weeks. But he is hopeful he’ll get a stimulus check and one of the small-business loans that the federal government has authorized. 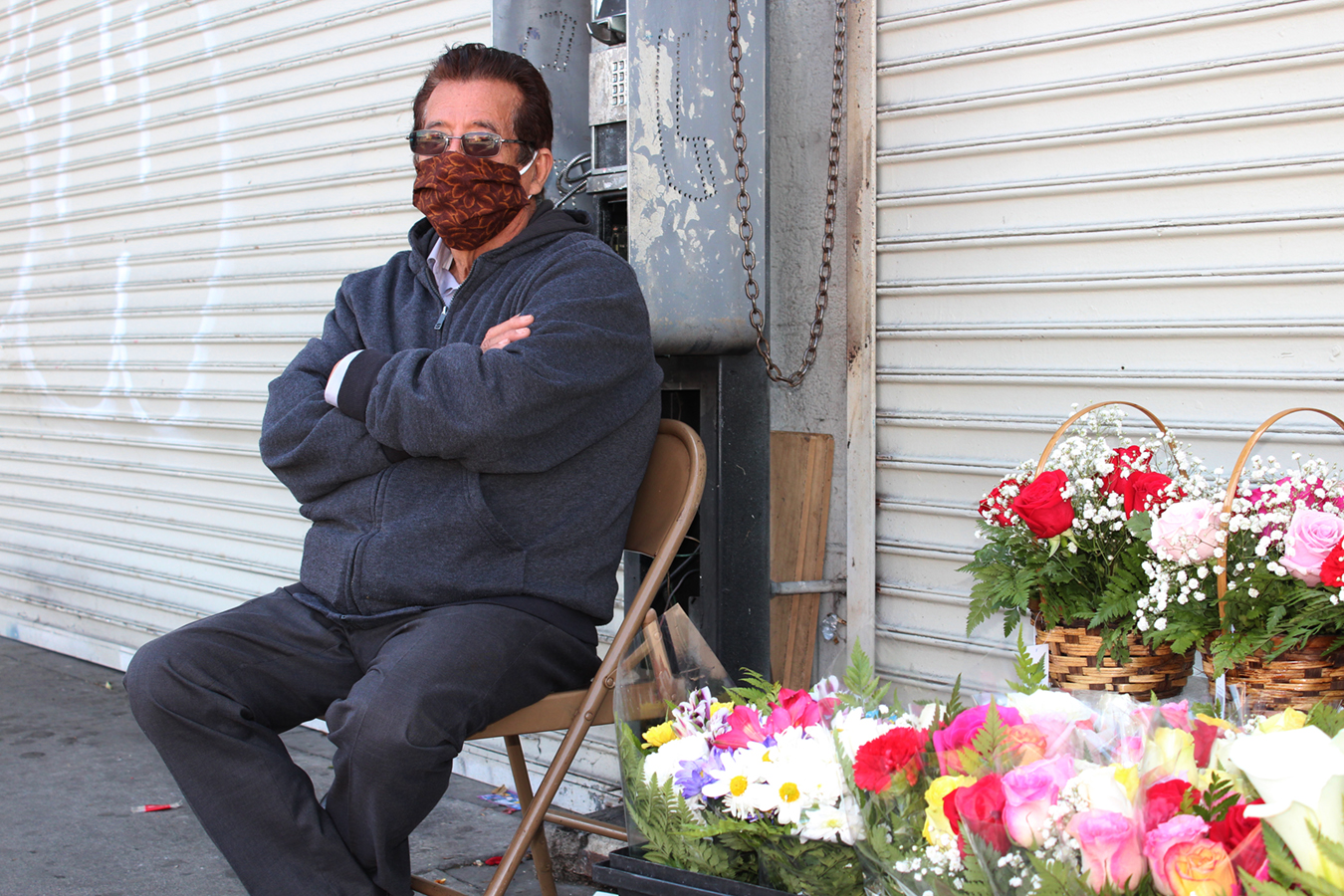 Jose Rivera is hopeful he’ll benefit from the stimulus checks and small-business loans the federal government has released to help Americans during the pandemic. Because the wholesale flower market is now closed, these bouquets will be the last that he sells for a while. (Anna Almendrala/KHN)

As brick-and-mortar businesses close, some laid-off workers are turning to sidewalk vending for the first time.

Marlon Castro, 35, earned $550 a week in a Huntington Park barbershop until he lost his job last month. He said he will make his April rent but is uncertain he’ll be able to do the same in May.

He tried staying home after the barbershop let him go, to do his part to slow the spread of the virus. But Castro, who is undocumented, quickly realized he couldn’t do that because he supports his 10-year-old son and extended family in Guatemala. So he began selling fabric masks on a Koreatown sidewalk for $3 apiece, while wearing one himself.

Standing near a bus stop last Wednesday, Castro was doing a brisk business, just a few hours before Los Angeles Mayor Eric Garcetti recommended all Angelenos wear cloth face coverings outdoors to prevent spread of the virus by people who may not know they have it.

“I’m selling these at a good price, to help my community as well,” Castro said. “I know I’m risking my life, but I’m not afraid because the Lord is with me.”

But he said his family was sad that he has to be on the sidewalk, and they constantly tell him to take care of himself. Asked to contemplate his future, Castro teared up.

“I’ve been here for 18 years and nothing like this has ever happened before,” he said. “But we’re not going to give up hope.”