With major insurers retreating from the federal health law’s marketplaces, California’s insurance commissioner said he supports a public option at the state level that could bolster competition and potentially serve as a test for the controversial idea nationwide.

“I think we should strongly consider a public option in California,” Insurance Commissioner Dave Jones said in a recent interview with California Healthline. “It will require a lot of careful thought and work, but I think it’s something that ought to be on the table because we continue to see this consolidation in an already consolidated health insurance market.”

Nationally, President Barack Obama and other prominent Democrats have revived the idea of the public option in response to insurers such as Aetna Inc. and UnitedHealth Group Inc. pulling back from the individual insurance market and many consumers facing double-digit rate hikes.

The notion of a publicly run health plan competing against private insurers in government exchanges was hotly debated but ultimately dropped from the Affordable Care Act when it passed in 2010. 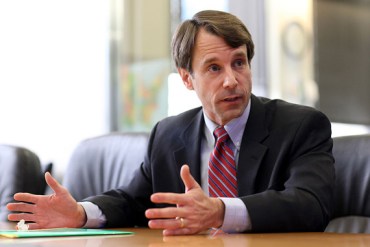 Health insurers have long opposed the idea, and other critics fear it would lead to a full government-run system.

Most of the discussion surrounding a public option, however, has focused on a nationwide plan, not one emanating from a state. In July, Democratic presidential nominee Hillary Clinton said she would “pursue efforts to give Americans in every state in the country the choice of a public-option insurance plan.”

“I don’t want to begin to prejudge it,” said Jones, an elected Democrat serving his second term as head of the state Department of Insurance, one of two insurance regulators in California. “I don’t know whether you would start in certain areas of the state and expand from there. I think there would be significant reservations about the state running it. There would be a wide variety of governance models you could come up with.”

Politically, the proposal may gain more traction in Sacramento than Washington with Democrats firmly in control of the state Legislature and many lawmakers eager to go beyond the boundaries of the federal health law. Depending on what form it took, a public option would require state legislation, some type of federal approval and some source of funding.

The idea of a California-style public option drew mixed reaction. Some consumer groups say they welcome another run at the public option after a disappointing outcome in 2010.

“We’re certainly very interested,” said Anthony Wright, executive director of Health Access California. “This is something we advocated for in its most ambitious form during the debate over health reform and there are elements of the proposal that could be adapted for California.”

Some health-policy experts questioned whether the proposal would backfire, ultimately reducing competition.

“I don’t know what would compel other insurers to stay in the market, so the public option could quickly become the only option,” said Katherine Hempstead, who directs the Robert Wood Johnson Foundation’s work on health insurance coverage. “I think that is only a clear win when the alternative is nothing.”

State Sen. Ed Hernandez (D-West Covina), chairman of the Senate Health Committee, said a public option could make sense in some underserved areas. But he said it may not address the problem of large health systems dictating high prices, and it could interfere with the progress made by the Covered California insurance exchange.

Covered California said 7.4 percent of its 1.4 million enrollees will only have two health plans to choose from for 2017. The state’s biggest markets of Los Angeles, San Francisco and Orange County all feature six to seven insurers.

“I don’t know if a public option will create a lower price [for] the consumer,” Hernandez said. “Covered California has done a good job of keeping rates fairly stable and it has enough plans.”

Health insurers agreed. “Covered California has arguably one of the strongest and most stable exchanges in the country. There is robust consumer choice so we don’t think we need to mess with something that isn’t broken,” said Nicole Evans, a spokeswoman for the California Association of Health Plans, a trade group.

For years, Jones has criticized the lack of competition in Covered California, and more recently he has opposed the mergers proposed by industry giants Anthem Inc. and Aetna Inc., saying they’re anticompetitive.

Anthem wants to acquire Cigna, while Aetna is trying to merge with Humana, but the U.S. Justice Department has sued to block both deals.

Covered California has fared better than many states in terms of insurer competition. Eleven health plans are participating in the state-run exchange for 2017, but UnitedHealth is dropping out after just one year in California’s individual market.

Consumer advocates had hoped UnitedHealth would become a strong rival to the state’s four largest insurers. Anthem, Blue Shield of California, Kaiser Permanente and Health Net (now a unit of Centene) account for 90 percent of the state’s exchange enrollment.

After modest 4 percent rate increases in 2015 and 2016, Covered California premiums are set to climb by 13.2 percent on average next year.

Jones said he anticipates that critics will cite the failure of numerous co-ops across the country as evidence a public option won’t work. But he said that criticism is unjustified because the Republican-led Congress eliminated crucial funding that many of the co-ops were depending on.

The co-ops are nonprofit insurers backed with federal loans and designed as an alternative to commercial health plans.

Remember The ‘Public Option’? Insurance Commissioner Wants To Try It In California