When Anthony Rendon (D-Paramount) is sworn in as assembly speaker Monday, it will mark a historic moment in California politics: For the first time, the two top posts in the state legislature will be held by Latinos.

Rendon will join Senate President Pro Tem Kevin de León (D-Los Angeles) at the top of the Capitol’s political pyramid, a development that could signal much brighter prospects for health care legislation — especially the effort to provide adult immigrants who are living here illegally with coverage under Medi-Cal, the government program for people with low incomes.

“What we’re witnessing is a dramatic surge in power. I think it will be a new and dramatic change in California,” said Jaime Regalado, a political science professor emeritus at California State University Los Angeles. 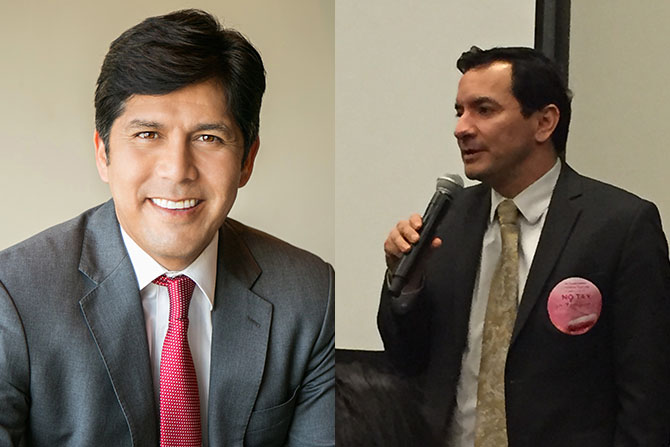 That agenda is weighted toward health care and education, he noted — from Medi-Cal expansion to paid sick leave to health coverage for children of those in the United States illegally.

Aside from Rendon and de León, other Latino leaders in Sacramento also play a big role in Capitol health care politics, including Ed Hernandez (D-West Covina), who heads the Senate Committee on Health and has authored dozens of health-related bills; Lorena Gonzalez (D-San Diego) in Assembly Health, who spearheaded the mandate for paid sick leave; and Ricardo Lara (D-Bell Gardens), who wrote the bill to provide Medi-Cal coverage to immigrant children living in California without legal documents.

“Everybody has been calling [the Latino community] the sleeping giant for so many years. But it has been awake for some time now,” Regalado said. “Latinos have always been concerned about their communities, and they have had the highest proportion of those without health care, so Latino leaders are going to rank those issues high on their list.”

Three years after the advent of Covered California and the expansion of Medi-Cal, nearly three-quarters of the roughly 3 million remaining uninsured in the state are Latino, according to a January 2015 study by UCLA and UC Berkeley researchers.

This year the wish list of Latino leaders includes a bill sponsored by de León to provide housing and mental health treatment for the chronically homeless — many of whom suffer from mental illness. And following last year’s successful move to offer full Medi-Cal coverage to undocumented children in California, the next step is to extend it to their adult counterparts, according to Rendon.

“It’s important, and it’s important now,” said incoming Assembly Speaker Rendon in an interview at last Saturday’s state Democratic convention in San Jose. “Covering undocumented immigrants is certainly something that resonates with me from a personal point of view, and from the caucus point of view it’s really high on our list.”

Rendon noted that de León’s background also makes the Senate leader sympathetic to the goal of providing coverage for immigrants without legal documents. Because it requires heavy political lifting, he said, “it certainly needs to be near the top of the agenda to succeed.”

Before he joined the Assembly in 2012, Rendon was executive director of the nonprofit Plaza de la Raza Child Development Services, which provides social and medical services to children in Pico Rivera, east of Los Angeles. De León spent time as a community organizer for immigrant rights before becoming a member of the legislature in 2006.

Though Medi-Cal for immigrant children without papers was approved and will take effect in May, providing that coverage for adults with the same immigration status is highly controversial and promises to be a tough political slog.

“In general, the direction the legislature has taken over the past decade or two has been to serve people who are in California illegally, and that takes benefits from other people,” said Ira Mehlman, spokesman for the Washington, D.C.-based Federation for American Immigration Reform, which lobbied in Sacramento against “Medi-Cal for all” when it was first put before the legislature last year.

“We think that just encourages people who violate laws, and deprives other people in the state of needed resources,” Mehlman said.

Regalado said that despite strong opposition, Medi-Cal coverage for the adults could succeed with the expected political push from Rendon and de León.

“They will be emboldened,” Regalado said. “They have enormous political power right now.”

The amount spent on Medi-Cal could change too, said Gerald Kominski, director of the UCLA Center for Health Policy Research.

Since the expansion of Medi-Cal began under the Affordable Care Act, enrollment in the program has expanded significantly. Medi-Cal now covers 13.3 million Californians — one-third of the state’s population.

Kominski noted that, “California is now serving a huge percentage of Latinos in Medi-Cal, and that continues to be seen as underfunded. I think you’ll see increased attention on that.”

The Latino caucus, the largest political caucus in the state, flexed its political muscles last weekend at the state Democratic convention in San Jose.

To one side of the front stage, a corner set aside for visiting dignitaries was packed with dozens of political heavyweights — a who’s who of legislators all waiting for their one minute at the microphone to address the crowded room.

“We are a blue state because of this community!” shouted former Los Angeles mayor Antonio Villaraigosa to the cheering crowd. “We are the future!”

While Latinos tend to share an interest in some issues, they are represented across the political spectrum.

A 2014 report by the Public Policy Institute of California showed likely Latino voters register in far higher numbers as Democrats (59%) than as Republicans (18%) or independents (17%). But it also noted that many Latino Democrats are politically conservative. And it found Latino voters are as likely to identify themselves as liberal (34%) as they are to call themselves middle of the road (33%) or conservative (33%).

U.S. Congressman Xavier Becerra (D-Los Angeles), chairman of the House Democratic Caucus and the fourth highest ranking Democrat in the House, said he’s been heartened by the growing political power of Latinos and what he characterized as their enormous legislative accomplishments.

“That wave you see on the horizon, it hasn’t hit the beach yet, but it’s coming,” Becerra said at the state Democratic convention. “You now have Latinos as the top two leaders in the state, behind the governor. There are moments that crystallize in the minds of people, and this is one of them. It’s coming.”