This story also ran on USA Today and GateHouse Media. This story can be republished for free (details).

Megan Kampling and her husband were only a few days into a spring break trip with their children when Kansas Gov. Laura Kelly shut down schools in an effort to slow the spread of the novel coronavirus.

“We both just looked at each other and said, ‘What are we going to do?’” Kampling recalled.

She works in the pharmacy department at Ascension Via Christi hospitals in Wichita and her husband is an officer with the Wichita Police Department, making them both essential workers who could not work remotely. But they have a 2-year-old and a kindergartner.

The hospital system where she works came to the rescue: Via Christi opened its Child Development Center to the elementary school children of its staffers. Kampling, whose toddler already went there, is being reimbursed for the additional costs to care for her older child.

Because Kansas hasn’t been hit as hard by the coronavirus pandemic as other parts of the country yet, medical providers and state officials have had weeks to prepare for a potential surge of cases. In Wichita — the state’s largest city, with nearly 400,000 residents ― Ascension Via Christi has designed its plans to care for COVID-19 patients, while protecting and supporting staff members and their families with food, child care and even housing.

Local aircraft manufacturers and entrepreneurs have also played a role in boosting critical equipment needs, as the state’s relatively low rate of cases per capita has made it a low priority to receive federal assistance or attention from vendors.

As of Tuesday, Kansas had 1,986 confirmed cases, including more than 40 treated at Via Christi Wichita hospitals, and 100 deaths. Modeling indicates that if Kansas experiences a surge, it would likely occur in late April and early May. 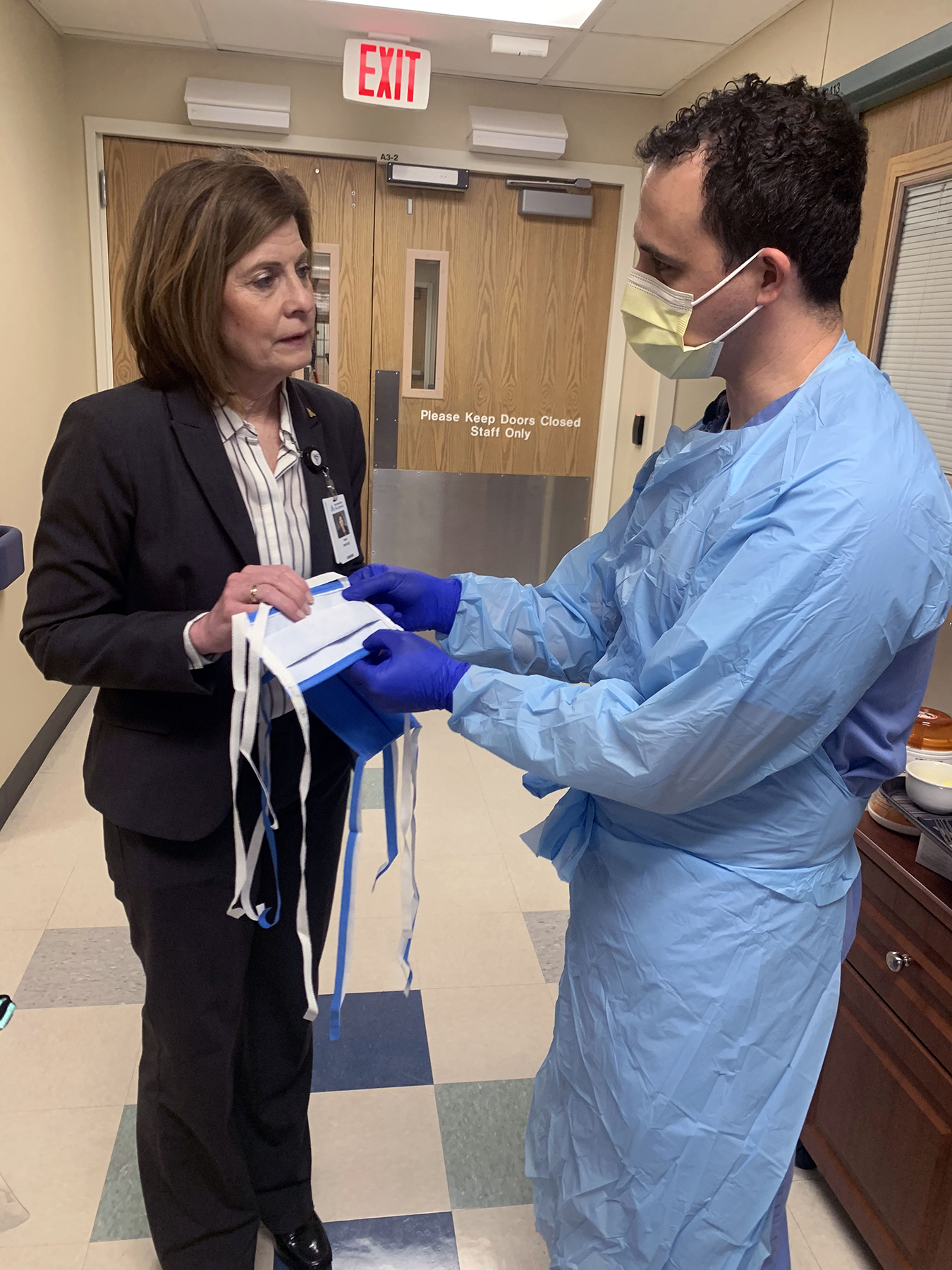 “It may seem that we are kind of in this lucky state, where we don’t have that major surge and things are delayed to reach us,” said Dr. Sam Antonios, chief medical officer for Ascension Via Christi hospitals in Wichita. “It just makes it challenging for us because now we have to run a marathon knowing we have to be more careful with what we have.”

To overcome a shortage of testing supplies from the state’s strategic stockpile, as well as from the federal government, Via Christi staffers drive 175 miles to Tulsa, Oklahoma, typically three times a day to deliver in-house tests to a lab for processing. Via Christi, a Catholic health care system that is part of Ascension Health, operates hospitals and medical facilities throughout Kansas. The largest, St. Francis, houses the hospital system’s COVID-19 unit.

Via Christi facilities and another Wichita hospital, HCA Wesley Medical Center, restricted visitors following the first reported case in the United States and canceled all elective and nonemergency surgery to expand capacity. Both have announced plans to retain and pay staff members through the crisis.

Traditionally competitors, the two hospital systems are now working together, and with local and state authorities and civic leaders, to get Wichita through the pandemic. Both have made arrangements for staffers who work with COVID-19 patients to stay at area hotels, in an effort to protect families.

“They understand the risks that health care and front-line staffers are taking to take care of these patients,” said Sarah Onwugbufor, Via Christi’s nurse manager for the COVID-19 unit. “They are giving them another option to make sure their families are safe.”

Registered nurse Trina Wilson, who volunteered for the COVID-19 unit, said a grocery store specially set up in the St. Francis cafeteria has reduced the stress of having to stop at a supermarket on her way home. After reports emerged of locals unhappy to see medical personnel in scrubs in area stores, she said it was a relief to be able to purchase items such as milk, tomatoes, bread and potatoes at a store inside the hospital. 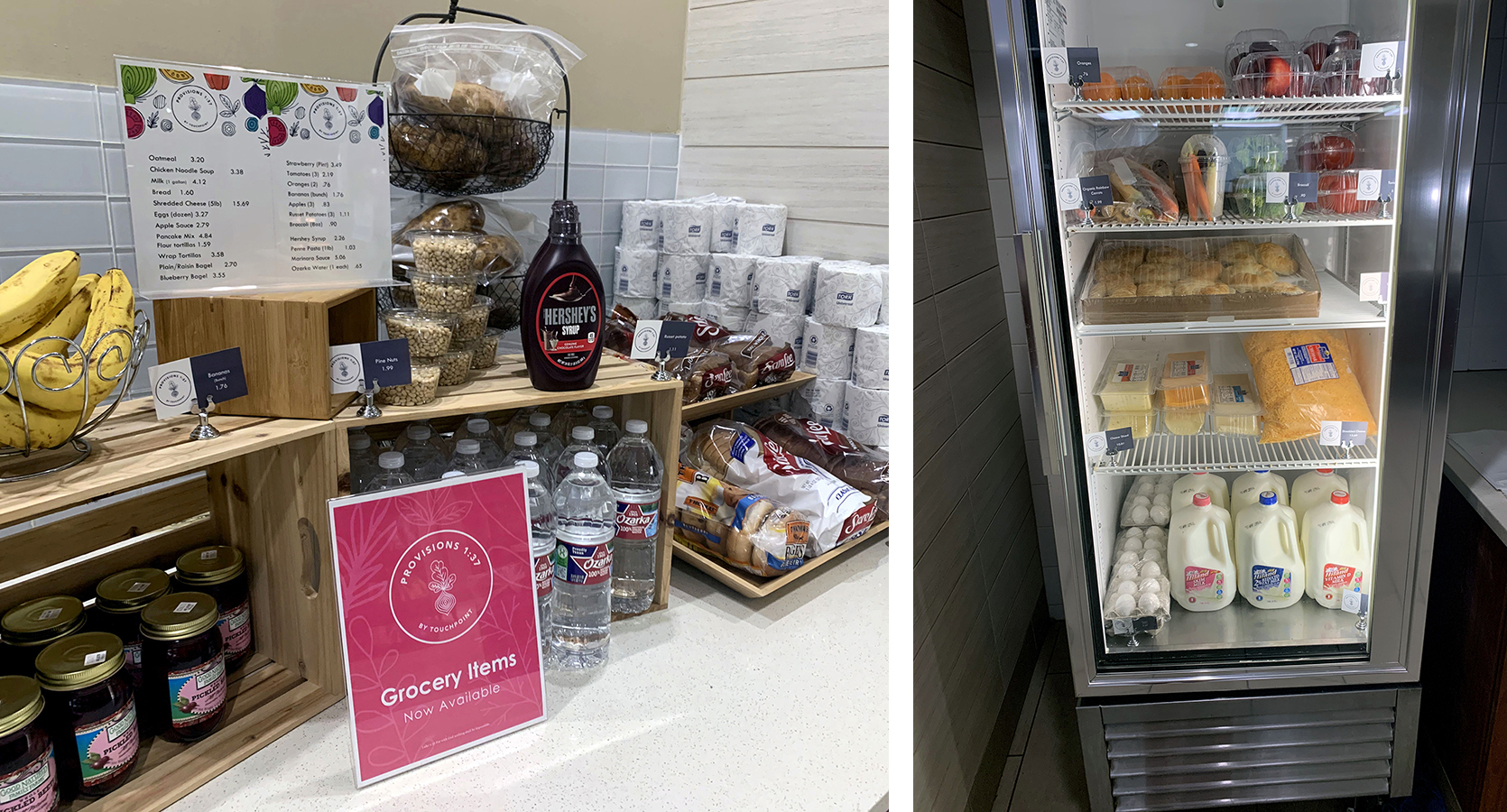 The cafeteria is also selling — and delivering within the hospital — four-person meals to staffers three days a week. The meals include a main dish, such as chicken shawarma, pizza or bistro sandwiches, along with a side, dessert and drinks.

“We are just doing our part to support the health care providers,” said the hospital’s executive chef, Alonzo Spencer. “They are putting their lives on the line for us.”

Reusable bags are provided to staffers to safely transport scrubs home, after a nurse suggested the idea. David Alexander, president of the Via Christi Foundation, said the owner of a local dry-cleaning business helped negotiate a good deal for the bags from his supplier, and then made a donation to help cover the costs.

“It’s amazing,” Wilson said of the bag donation. She had been putting her scrubs in a disposable trash bag before leaving the hospital. She and her husband established a strict routine for when she arrives home, which includes special handling of the bag containing her scrubs and showering in the basement before she can enter the main living areas.

Another idea from staffers was to recycle what’s known as blue wrap, a polypropylene material used to wrap surgical instruments before sterilization, into filters for cloth masks, said the hospital system’s infection prevention and control director, Kären Bally. 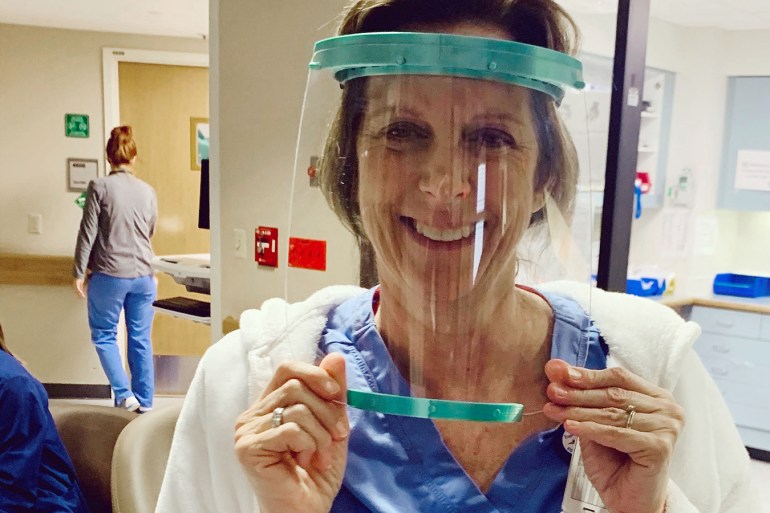 Terri Ramsey, a registered nurse in St. Francis' cardiac intensive care unit, models a prototype of the 3D-printed face shields produced by volunteers from Combating COVID-19 As A Community. (Courtesy of Ascension Via Christi) 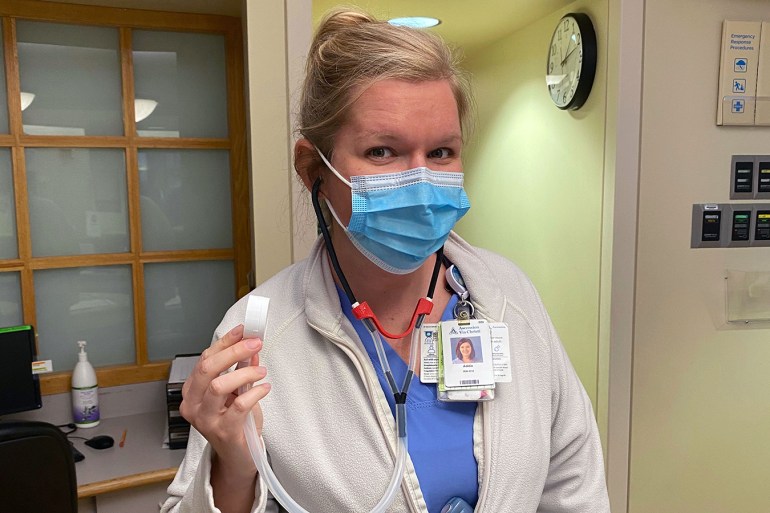 When Wichita Police Sgt. Teddy Wisely, a 3D-printing enthusiast, asked around for people interested in making polycarbonate face shields to protect the front-line responders in the pandemic, he found no shortage of volunteers.

With Via Christi paying for materials, and a GoFundMe campaign to help cover the costs for parts and repairs to machines, Wisely formed Combating COVID-19 As A Community, a collective of 3D-printing hobbyists, local aircraft manufacturers, Wichita State University and other area businesses. They have produced more than 2,000 shields for first responders, law enforcement and medical personnel, with a goal of 7,000.

“This is people in the community taking a step forward to take care of the people who take care of them on a daily basis,” said Wisely, adding that once private industry catches up, his group will stand down.

Wichita State University has since begun creating other medical equipment, such as disposable stethoscopes, with local aircraft manufacturers.

Carla Yost, Via Christi’s chief nursing and quality officer, said the pandemic will have a long-term impact on the delivery of health care and how medical providers do their jobs. But the current uncertainty of dealing with this new disease can feel overwhelming.

Still, she said, “There is a strong sense of pride about what we are doing here now.”

In The Middle Of The Country, A Hospital And Its Community Prepare For The Surge