Don Meade doesn’t like hospitals, but he uses them. In just one year, he made 62 trips to the emergency room. He rattles off the names of local hospitals in Orange and Los Angeles counties like they’re a handful of pills.

“St. Joseph’s in Orange, [Saddleback Memorial in] Laguna Hills,” he says. “The best one for me around here is PIH in Whittier.”

At 52, Meade has chronic heart disease and other serious ailments, and he is recovering from a longtime addiction to crack cocaine. Today, he lives with his dog Scrappy in a small apartment in Fullerton.

Beyond making a trip to the ER pretty much every week of the year, Meade has had innumerable X-rays, scans, tests and hospital admissions — all of it on the taxpayers’ and hospitals’ dime, since he is a beneficiary of Medi-Cal, the state and federal program for the poor.

“The doctors and a few nurses knew me [by name], and I told them I should get some stock in the hospital because I was there so much,” he muses.

As health care costs continue to rise, attention has turned to a tiny number of expensive patients like Meade, called super-utilizers. A program that started in Orange County has taken a different approach to treating Meade and other high-cost patients: Over the past two years, it has tracked them, healed them and saved a ton of money along the way.

Meade received more than a million dollars worth of care in each of the two years before he entered the program, according to Paul Leon, CEO of the Illumination Foundation, a homeless health services group based in Irvine. Leon’s foundation runs the program, known as Chronic Care Plus, which has stabilized Meade and found him housing.

In Medi-Cal, the state’s health insurance program for the poor, frequent health care users representing just 1 percent of the patient population account for about one-fourth of health care spending, according to Kenneth Kizer, MD at the Institute for Population Health Improvement at UC Davis.

That’s why health professionals across California have started targeting this problem group.

In a small, busy room at a recuperative care center in Santa Fe Springs, just up Highway 5 from Disneyland, the Chronic Care Plus program’s lead nurse, John Simmons, directs treatment for a select group of homeless frequent users.

Simmons says the big secret about these health care frequent fliers is that they’re not necessarily the sickest patients — they’re often just homeless, with substance abuse or mental health issues, and they routinely end up in the emergency room.

“It was them relying on the ER for everything,” Simmons said. “They got a common cold, they’d want to run to the ER.”

To break the cycle, Simmons conducts what is known as intensive care coordination. He helps the 37 participants, including Don Meade, find housing, get off drugs, get access to services, and make appointments with primary care doctors. 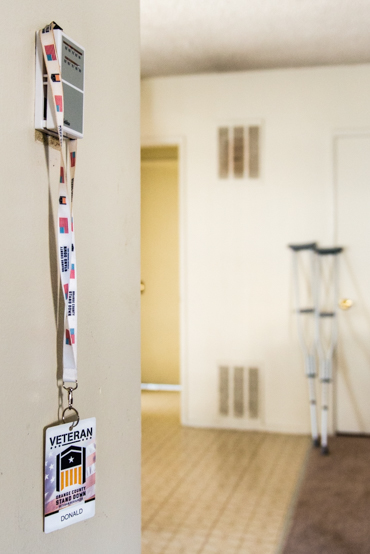 Meade, an Army veteran, was living outside the Santa Ana Civic Center for years before he found housing through the Illumination Foundation’s Chronic Care Plus program. The program identifies homeless patients being discharged from hospitals and helps place them in apartments. (Heidi de Marco/California Healthline)

The Illumination Foundation launched the program with the goal of breaking the vicious cycle into which these patients had fallen, then following them over a two-year period. Getting consistent care and support for that length of time, Simmons says, can change their lives for good.

“The beauty of the program was, we took those people and got them self-sufficient,” Simmons said, “and you notice their health [go] on an upward trend.”

The program saved $14 million in health care spending for just those 37 people over two years, compared with the two years prior to the launch of the program.

Saving so much money with so few participants is an open invitation to expand the program, said Pat Brydges, an administrator at St. Joseph’s Hospital, which helped fund the program.

“There are homeless people in every city in every state,” Brydges said. “There’s no reason why this wouldn’t work across the nation.”

The program is consistent with St. Joseph’s mission to help all people, and the cost savings is an extra perk, she said.

She pauses briefly to contemplate how much money would be saved if this tiny pilot program went national.

“Wow, I don’t even know if I could count that much,” Brydges said. “But if we can do $14 million in this one area alone, it’s amazing what we could do across the nation.”

Back in his Fullerton apartment, Meade said he now sees a primary care doctor instead of going to the emergency room. He still has ongoing heart and health problems. 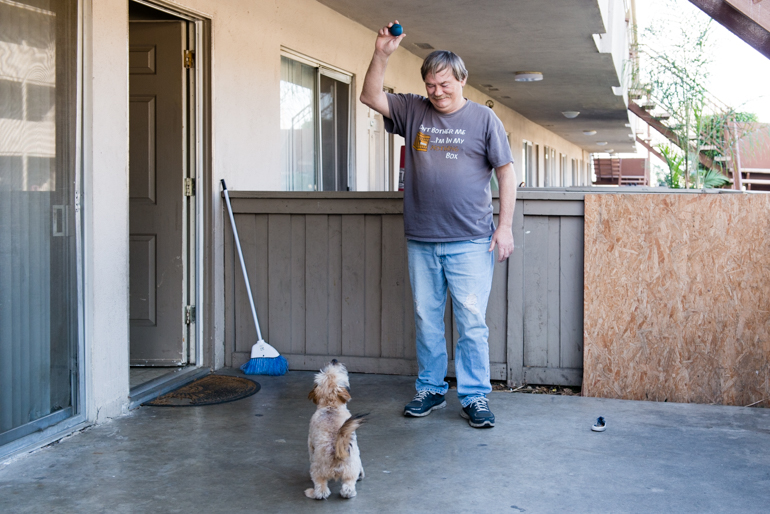 Meade plays with his puppy Scrappy in his apartment patio. “If I lost this apartment, I would give Scrappy to my neighbors … I wouldn’t want him to be stressed out living in the streets.” (Heidi de Marco/California Healthline)

Being followed by program coordinators over such a long time has really made a difference in his life, Meade said.

“A lot of the stress leaves after you’re in your own home, but if you’re out in the street you’re worried so much all the time,” he said.

Getting off the street is one thing, Meade said, but the staying off it is another. It’s not just that he has his own doctor now, and better health. He has a new life, he said.

The Illumination Foundation plans to release data at the end of June on its first two years.