ROSEVILLE, Calif. — Until recently, Paul Smith didn’t consider himself much of an activist. But he woke up hours before sunrise on Saturday to attend his first town hall meeting.

That meeting near Sacramento, organized by his district’s Congressman Tom McClintock (R-Roseville), sparked a peaceful — if large and raucous — protest over Obamacare, the travel ban and other issues. And it drew national headlines.

“I have noticed many of my friends who never speak [about] politics are getting political,” said Smith, a 46-year-old Rocklin, Calif., resident and registered Democrat who works in marketing. He said he did not vote for McClintock.

Once on the political sidelines, Smith now finds himself one of the leading members of a group called Indivisible California-04 — named for McClintock’s 4th Congressional district. It is one of hundreds of groups forming across the country to “resist” the Trump Administration’s agenda, which includes repealing and replacing the Affordable Care Act.

Alongside veteran protesters, recently galvanized Californians like Smith are demonstrating, calling lawmakers and taking other measures to make their voices heard. For many, the issues are not partisan. They are personal.

Placer County resident Veronica Blake said her mother went without health insurance for nearly 10 years before she died in 2012 from heart disease. She had been diagnosed with breast cancer in her early 30s, and although she beat it after a mastectomy, the preexisting condition made her a high-risk patient whom insurers didn’t want to take on, Blake said.

Blake wonders how much longer her mother would have lived if she’d had health insurance all those years. Could her heart problems have been detected and treated earlier? 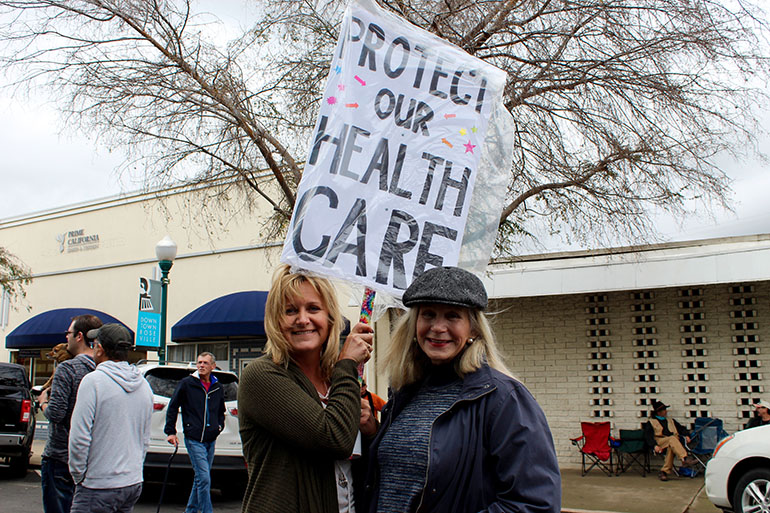 Veronica Blake, left, 48, of Placer County, said she was interested in learning what Rep. McClintock had to say about the ACA replacement plan, but wasn’t able to get into event. (Ana B. Ibarra/California Healthline)

Blake joined hundreds of others at Saturday’s rally, she said, because she has other family members with illnesses that would be considered preexisting conditions and fears that their coverage could be taken away.

Laurel Ward, who is a nurse in Placer County, said she made her way to McClintock’s town hall event because of what she sees daily in her crowded emergency room.

She also has a younger sister who was able to obtain coverage as a result of the Medi-Cal expansion made possible by the Affordable Care Act. “It’s difficult for young people to afford health insurance,” Ward said. “I know, because I went without insurance when I was a student.”

“Without the ACA,” she said. “It’s only going to get worse.”

For Indivisible California-04, the goal is to look ahead to the 2018 election. “We want to change politics in our district,” Smith said.

A website for the Indivisible movement offers groups a guide said to have been created by former congressional staffers and inspired by the rise of the Tea Party. It allows people to search and sign up for a local activist group, and as of Tuesday, there were 33 groups registered within 25 miles of Sacramento.

Jamie Beutler, chair of the rural caucus for the California Democratic Party and a founding member of another group, Indivisible Sierra Nevada, said she thinks these organizations are gaining popularity because people are desperate.

“People are angry, they are frustrated and want to do something. This gives them a place to go,” said the Placerville, Calif., resident.

Beutler, who is on Medicare and Social Security, worries that cuts to her benefits means she’ll have to sell her home.

“I hope this event was a wakeup call [for McClintock],” Beutler said. “His constituents are not happy.” 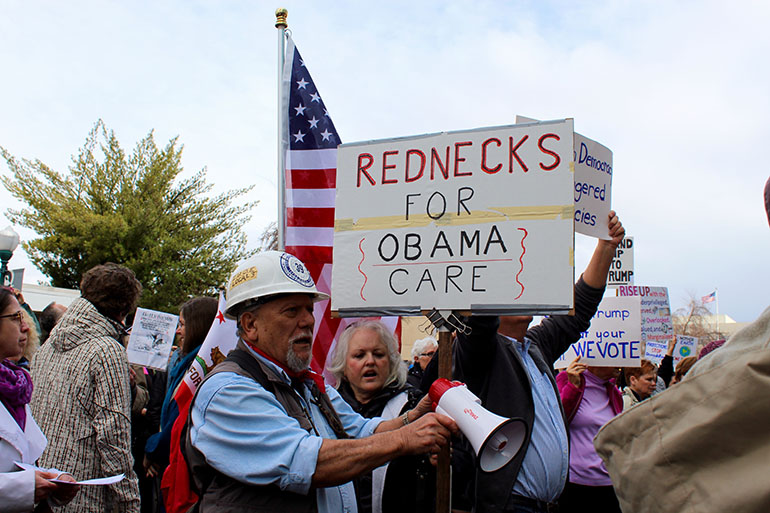 A protest organized near Sacramento sparked a peaceful — if large and raucous — protest over Obamacare. (Ana B. Ibarra/California Healthline)

Although McClintock later characterized the gathering as having “an anarchist element,” other attendees and a reporter outside the packed auditorium saw an intense but peaceful demonstration, with many senior citizens among the crowd. McClintock was escorted from the town hall meeting by police, but no arrests or citations were made, according to Roseville police.

McClintock’s staff did not return a request for comment from California Healthline. But in an interview with with Sacramento television station KCRA 3 after the meeting, McClintock was critical of some demonstrators.

“It made a big impression on me that there is an intolerance in the political left that is running very deep, and the fact that police had to intervene is a serious indication of the growing violence streak within the left,” he said. “This is very disturbing, but I will also say that most of the people there were decent concerned citizens.”

Regarding the GOP’s plan to replace the ACA, McClintock told KCRA 3 he expects to see a plan “reported out within the next few weeks.”

“We’ll follow the plan that has been proposed by [Republican Congressman and Health and Human Services Secretary nominee] Tom Price over many years … which is restore to individuals the financial means and the wide range of choices to put their families back in charge of their own health care,” McClintock said.

Demonstrators also have been active in other largely Republican districts, in California and around the country. About 300 miles south of Roseville, hundreds gathered on Jan. 27 in front of House Majority Leader Kevin McCarthy’s Bakersfield office to advocate for preserving the Affordable Care Act. McCarthy supports replacing it, but advocates point out that the area he represents is highly dependent on Medicaid and Medicare. 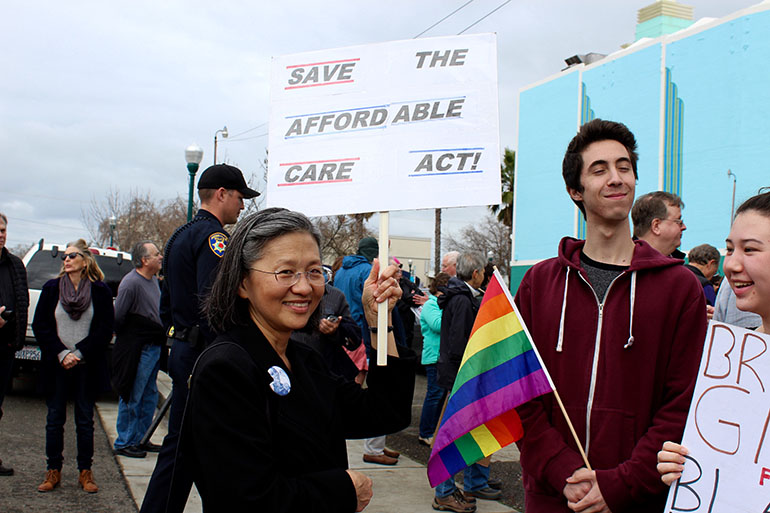 Helen Cheng is an internist in El Dorado County. Some of her patients are worried about what might happen to their Covered California plans. “I’m here because of my patients. Getting insurance is a nightmare for some of these people.” (Ana B. Ibarra/California Healthline)

McCarthy represents most of Kern and Tulare counties, where approximately 150,000 people are enrolled in expanded Medicaid as a result of the ACA, and about another 29,000 have enrolled in a Covered California plan.

In an op-ed published in the Sacramento Bee last month, McCarthy wrote that the Medicaid program is in need of reform.

“It is true that millions of Californians receive health insurance coverage through Obamacare and in particular through the Medicaid expansion. But the number of insured matters little when the quality of the insurance is so dismal.”

Dennis Revell, chair of the Placer County Republican Party, said that the demonstration outside McClintock’s town hall meeting was one of the most organized he’s seen. But he said it was not a true organic, local movement. People were invited by organizers from across county and state lines, he said, although he offered no evidence of that.

The Democratic Party is not as active or organized in Placer County as it is in other counties, which is why Saturday’s event stood out, Revell said.

“I think it would be fair to say that the speed at which the Trump administration is moving to deliver on its promises has galvanized the progressive and left to organize to a point that they’ve never had to before,” Revell said.

Mark Rosen, a member of Indivisible Auburn, Calif., said organizers are now focused on spreading the word about citizen activism. In his last recruitment meeting, more than 80 local residents showed up wanting to learn more about how to become involved.

“It shows that there is an army of people who are profoundly upset,” Rosen said, “and particularly concerned about destroying the progress we’ve made with the ACA.”