Danette Lake thought surgery would relieve the pain in her knees.

The arthritis pain began as a dull ache in her early 40s, brought on largely by the pressure of unwanted weight. Lake managed to lose 200 pounds through dieting and exercise, but the pain in her knees persisted.

A sexual assault two years ago left Lake with physical and psychological trauma. She damaged her knees while fighting off her attacker, who had broken into her home. Although she managed to escape, her knees never recovered. At times, the sharp pain drove her to the emergency room. Lake’s job, which involved loading luggage onto airplanes, often left her in misery.

When a doctor said that knee replacement would reduce her arthritis pain by 75 percent, Lake was overjoyed.

“I thought the knee replacement was going to be a cure,” said Lake, now 52 and living in rural Iowa. “I got all excited, thinking, ‘Finally, the pain is going to end and I will have some quality of life.’”

But one year after surgery on her right knee, Lake said she’s still suffering.

Most knee replacements are considered successful, and the procedure is known for being safe and cost-effective. Rates of the surgery doubled from 1999 to 2008, with 3.5 million procedures a year expected by 2030.

But Lake’s ordeal illustrates the surgery’s risks and limitations. Doctors are increasingly concerned that the procedure is overused and that its benefits have been oversold. 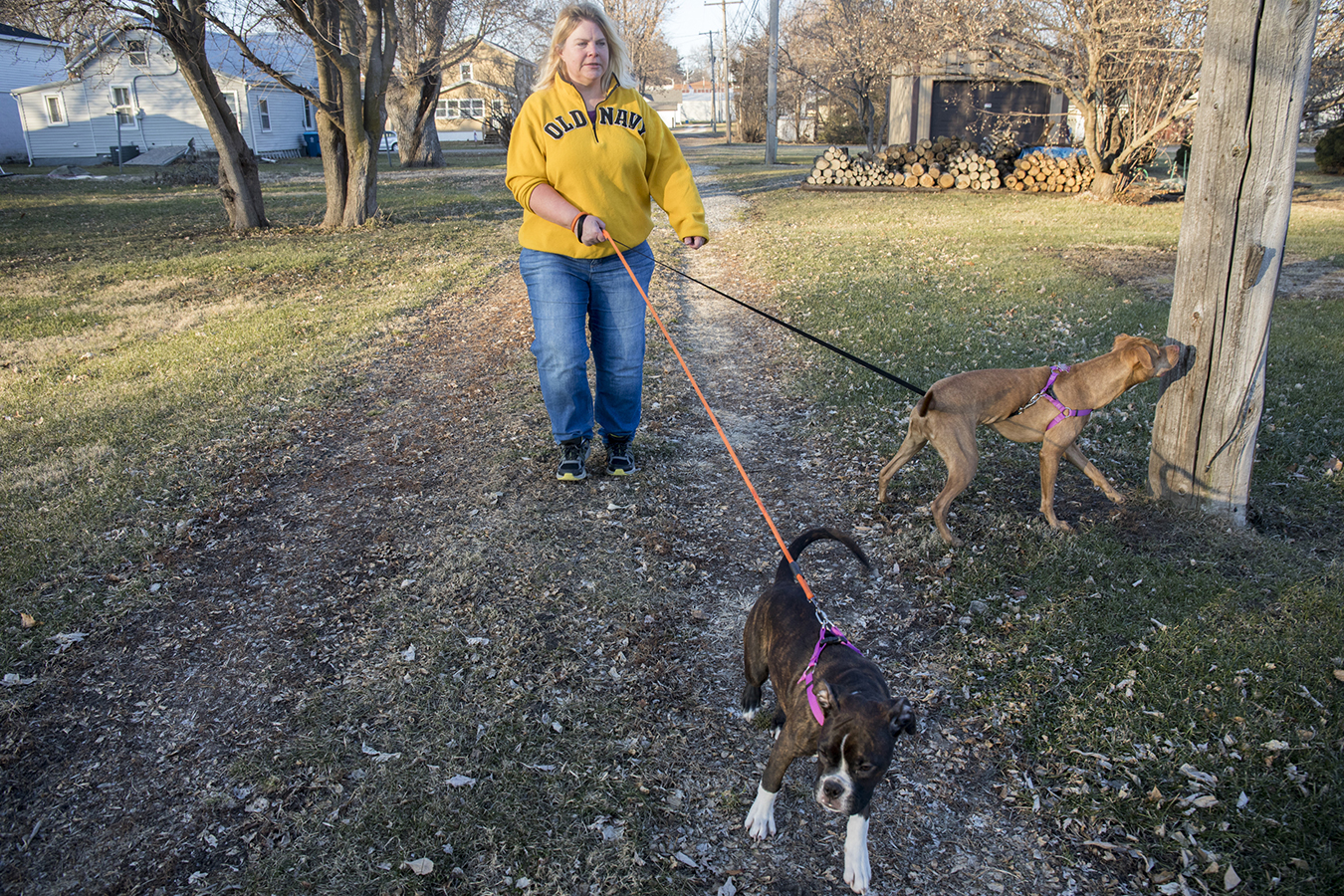 Danette Lake walks her dogs, Zoe and Chloe, in her rural Iowa neighborhood in early December. One year after having knee replacement surgery to treat arthritis, she says she’s “in constant pain.” (Rachel Mummey for KHN)

Research suggests that up to one-third of those who have knees replaced continue to experience chronic pain, while 1 in 5 are dissatisfied with the results. A study published last year in the BMJ found that knee replacement had “minimal effects on quality of life,” especially for patients with less severe arthritis.

One-third of patients who undergo knee replacement may not even be appropriate candidates for the procedure, because their arthritis symptoms aren’t severe enough to merit aggressive intervention, according to a 2014 study in Arthritis & Rheumatology.

“We do too many knee replacements,” said Dr. James Rickert, president of the Society for Patient Centered Orthopedics, which advocates for affordable health care, in an interview. “People will argue about the exact amount. But hardly anyone would argue that we don’t do too many.”

Although Americans are aging and getting heavier, those factors alone don’t explain the explosive growth in knee replacement. The increase may be fueled by a higher rate of injuries among younger patients and doctors’ greater willingness to operate on younger people, such as those in their 50s and early 60s, said Rickert, an orthopedic surgeon in Bedford, Ind. That shift has occurred because new implants can last longer — perhaps 20 years — before wearing out.

Yet even the newest models don’t last forever. Over time, implants can loosen and detach from the bone, causing pain. Plastic components of the artificial knee slowly wear out, creating debris that can cause inflammation. The wear and tear can cause the knee to break. Patients who remain obese after surgery can put extra pressure on implants, further shortening their lifespan.

The younger patients are, the more likely they are to “outlive” their knee implants and require a second surgery. Such “revision” procedures are more difficult to perform for many reasons, including the presence of scar tissue from the original surgery. Bone cement used in the first surgery also can be difficult to extract, and bones can fracture as the older artificial knee is removed, Rickert said.

Revisions are also more likely to cause complications. Among patients younger than 60, about 35 percent of men need a revision surgery, along with 20 percent of women, according to a November article in the Lancet.

Yet hospitals and surgery centers market knee replacements heavily, with ads that show patients running, bicycling, even playing basketball after the procedure, said Dr. Nicholas DiNubile, a Havertown, Pa., orthopedic surgeon specializing in sports medicine. While many people with artificial knees can return to moderate exercise — such as doubles tennis — it’s unrealistic to imagine them playing full-court basketball again, he said.

“Hospitals are all competing with each other,” DiNubile said. Marketing can mislead younger patients into thinking, “‘I’ll get a new joint and go back to doing everything I did before,’” he said. To Rickert, “medical advertising is a big part of the problem. Its purpose is to sell patients on the procedures.”

Rickert said that some patients are offered surgery they don’t need and that money can be a factor.

Knee replacements, which cost $31,000 on average, are “really crucial to the financial health of hospitals and doctors’ practices,” he said. “The doctor earns a lot more if they do the surgery.”

Yet surgery isn’t the only way to treat arthritis.

Studies show that these approaches can even help people with more severe arthritis.

In a study published in Osteoarthritis and Cartilage in April, researchers compared surgical and non-surgical treatments in 100 older patients eligible for knee replacement.

Over two years, all of the patients improved, whether they were offered surgery or a combination of non-surgical therapies. Patients randomly assigned to undergo immediate knee replacement did better, improving twice as much as those given combination therapy, as measured on standard medical tests of pain and functioning.

But surgery also carried risks. Surgical patients developed four times as many complications, including infections, blood clots or knee stiffness severe enough to require another medical procedure under anesthesia. In general, 1 in every 100 to 200 patients who undergo a knee replacement die within 90 days of surgery.

Significantly, most of those treated with non-surgical therapies were satisfied with their progress. Although all were eligible to have knee replacement later, two-thirds chose not to do it.

Tia Floyd Williams suffered from painful arthritis for 15 years before having a knee replaced in September 2017. Although the procedure seemed to go smoothly, her pain returned after about four months, spreading to her hips and lower back.

She was told she needed a second, more extensive surgery to put a rod in her lower leg, said Williams, 52, of Nashville.

“At this point, I thought I would be getting a second knee done, not redoing the first one,” Williams said.

Other patients, such as Ellen Stutts, are happy with their results. Stutts, in Durham, N.C., had one knee replaced in 2016 and the other replaced this year. “It’s definitely better than before the surgery,” Stutts said.

Doctors and economists are increasingly concerned about inappropriate joint surgery of all types, not just knees.

Inappropriate treatment doesn’t harm only patients; it harms the health care system by raising costs for everyone, said Dr. John Mafi, an assistant professor of medicine at the David Geffen School of Medicine at UCLA.

The 723,000 knee replacements performed in 2014 cost patients, insurers and taxpayers more than $40 billion. Those costs are projected to surge as the nation ages and grapples with the effects of the obesity epidemic, and an aging population.

The percentage of knee replacements performed on people 45 to 64 increased from 30 percent in 2000 to 40 percent in 2015, according to the Agency for Healthcare Research and Quality.

Because the devices can wear out in as little as a few years, a younger person could outlive their knees and require a replacement, Garlich said. But “revision” surgeries are much more complicated procedures, with a higher risk of complications and failure.

“Patients think after they have a knee replacement, they will be competing in the Olympics,” Garlich said.

Danette Lake once planned to undergo knee replacement surgery on her other knee. Today, she’s not sure what to do. She is afraid of being disappointed by a second surgery.

Sometimes, she said, “I think, ‘I might as well just stay in pain.’”

Up To A Third Of Knee Replacements Pack Pain And Regret