As Queen’s “We Will Rock You” blared in the background, hundreds of parents and families from around the state gathered in front of the state Capitol Thursday morning to testify about a bill they said would — if passed — spark a revolution.

Not a bill to raise taxes. Not a bill to expand fracking. A bill to determine which kids must get their routine shots.

Picnic vibes outside the capitol, with a few hundred folks who are opposing #sb276. Lots of children, infants to teens. Lots of signs criticizing @DrPanMD, big pharma, gov’t regulation. Themes of the opposition are yellow and “freedom.” pic.twitter.com/r7xuZatJhb

For this group of passionate Californians, a measure by pediatrician and state Sen. Richard Pan (D-Sacramento) poses a threat to their rights as parents. For the author, public health officials and other supporters, it’s a necessary step to keep kids safe — in school and beyond.

Vaccines have become an explosive topic around the country, even as numerous studies show they are safe and effective and complications are rare.

The bill, SB 276, would tighten the rules on which children would qualify for medical exemptions from vaccinations. It was passed by the state Senate in May, and had a key hearing before the Assembly Health Committee on Thursday. 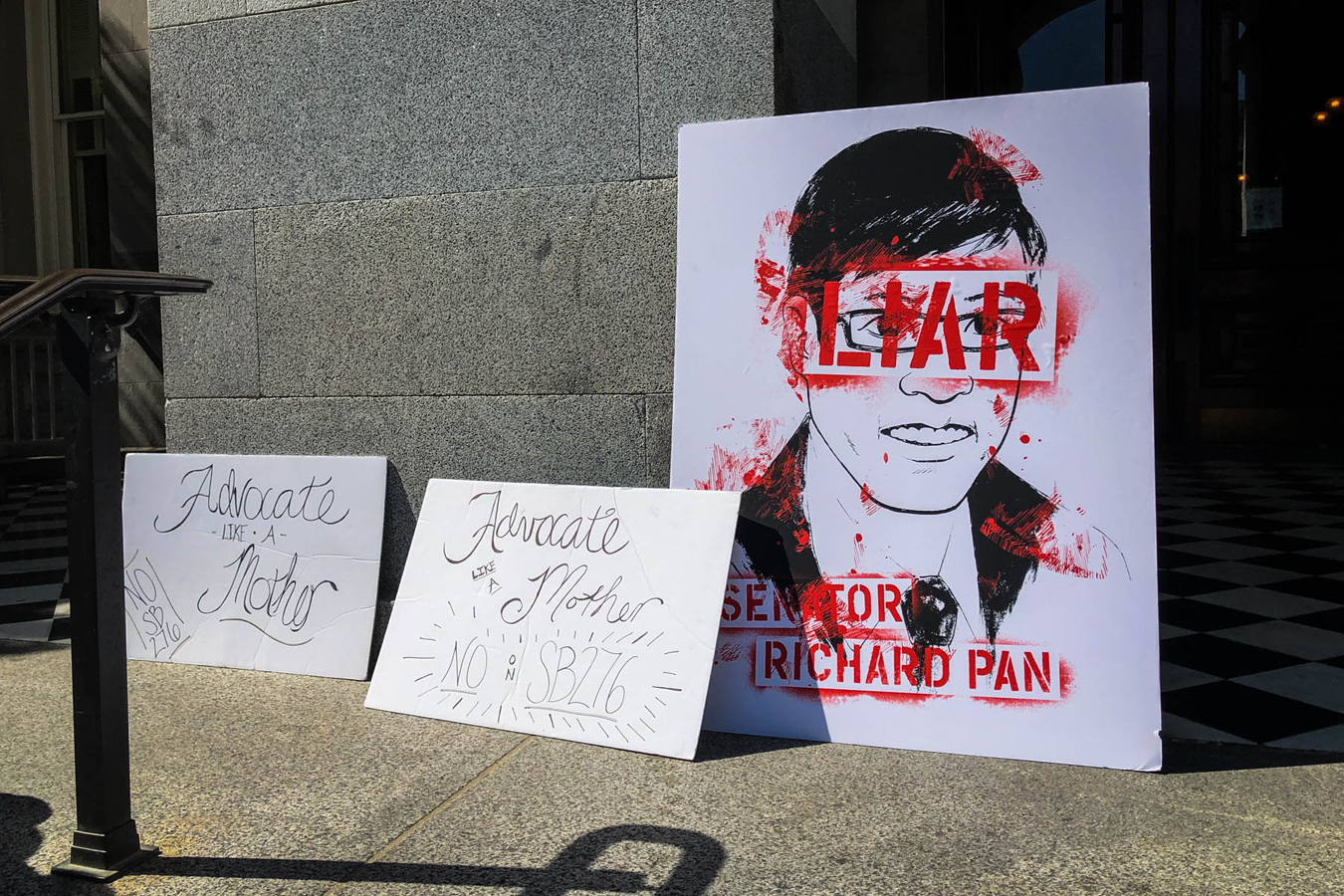 State Sen. Richard Pan, author of SB 276, has been the object of much ire among vaccine opponents since offering a previous vaccine bill that tightened vaccine mandates.(Anna Maria Barry-Jester/California Healthline)

Before the hearing, bill opponents, many of them clad in yellow vests similar to those worn by protesters in France, listened as Robert F. Kennedy Jr., a high-profile vaccine opponent, hyped the crowd.

In a speech echoing others he has given around the country (and which have drawn a public rebuke from his siblings), he spoke of Jews in concentration camps and other minorities throughout history who have been “scapegoats” for diseases.

Behind him, poster-size photos of Pan, the object of vaccine opponents’ ire, were splattered in red, overlaid by the word “LIAR.”

The rancor continued inside the Capitol. As Pan presented his measure before the committee, parents in the back of the room, hands wrapped in yellow tape with “false” written on the palm, raised their hands, hissing as he spoke.

Audience and those waiting to testify have yellow tape with “false” written on it, and they raise their hands in response to @drpanmd’s comments pic.twitter.com/vfbIDfmshe

It wouldn’t be the last time lawmakers would have to ask them to be quiet and follow the rules.

The committee heard an amended version of the bill, which is intended to curb what has been described by public health experts as a dangerous increase in medical exemptions from vaccination. Since a state law enacted in 2016 ended vaccine exemptions based on religious and personal beliefs, children can be excused only on medical grounds.

Since then, the number of medical exemptions has jumped, and the exemptions are clustered in many of the same parts of the state that previously had high rates of religious or personal belief exemptions, according to new state data. Around the state, 117 schools reported that 10% or more of their kindergartners had been granted medical exemptions in the 2018-19 school year.

The measure underwent significant changes earlier this week to allay concerns from Gov. Gavin Newsom and others that it would put bureaucracy between doctors and patients. In the new version, officials with the state Department of Public Health would review medical exemptions for children at schools where more than 5% of kids aren’t vaccinated, and those written by doctors who have handed out more than five exemptions in a calendar year.

But the amendments didn’t seem to address the fears of its most ardent opponents, even as Newsom, a Democrat, told reporters Tuesday that he would sign the new version.

In testimony supporting the bill, Jenni Balck, a teacher and mother of an immunocompromised child who had a heart transplant, explained that her child’s health relies on community immunity.

“Parents want what’s best for their kids,” said Balck. “I understand that people who don’t want to vaccinate think they are doing what’s right for their kids. But they put my child in danger every day,” she said, noting cases of whooping cough in her Southern California neighborhood just two weeks earlier.

Doctors representing major medical providers around the state — including Kaiser Permanente and Sutter Health — spoke in support of the bill. (Kaiser Health News, which produces California Healthline, is not affiliated with Kaiser Permanente.)

“We’re seeing preventable disease on an almost daily basis,” said Dr. Alisa Awtry, a family physician in Sonoma County who came with her infant to testify in favor of the measure.

Dr. Alisa Awtry is a family physician in Sonoma County, where there is a high rate of medical exemptions. She came with her infant to testify in favor of #sb276 pic.twitter.com/9MyQu1dCom

Another physician, Dr. Bob Sears of Orange County, a national leader in the anti-vaccine movement who was placed on probation by the Medical Board of California, testified on behalf of the opposition — speaking so long he didn’t leave time for Kennedy.

Sears, a pediatrician, said the bill would penalize physicians for doing their jobs, comparing it to “stop and frisk” public safety tactics that often target minorities and sow fear.

He was followed by hundreds of vaccine skeptics who spent the next three hours formally stating their opposition to the bill. Several warned of what would come if the bill passes. “You’re going to cause a revolution,” one woman said. Others said they would move out of state. Pan stood stoically at the front of the room, turning to acknowledge each person who testified.

One of the speakers opposing #sb276 says “you’re gonna cause a revolution if this passes,” met which cheers and clapping from the overflow hearing room pic.twitter.com/jTcOP4n3Pw

“I don’t think we should use taxpayer money to micromanage doctors,” said Heather Marie Levin Mulligan, 40, of Roseville.

Heather Marie Levin Mulligan is here to testify against #sb267 with her son Kai. She is hesitant about the vaccine schedule, and opposes the bill because she thinks government should leave those decisions to doctors pic.twitter.com/xLrDYQ5DkI

After more than five hours of testimony, the bill passed the committee.

But the hearing didn’t appear to change many minds.

“We will not comply!” opponents chanted as they marched on Newsom’s office after the hearing.

Outside of Governor @GavinNewsom‘s office after #sb276 was just passed through the Assembly Health Committee. Chants of “we will not comply” and singing the national anthem pic.twitter.com/Hxqj8643Zx