Gertrude Siegel is 101 and hears it all the time. “Everyone says ‘I want to be just like you.’ I tell them to get in line,” she said.

John and Charlotte Henderson, 104 and 102, often field questions from wannabes eager to learn their secrets.

“People ask me ‘What is the secret?’ The answer is simple. Choose the right grandparents. They were in their 80s. My mother was 89, and my father was 93,” he said. 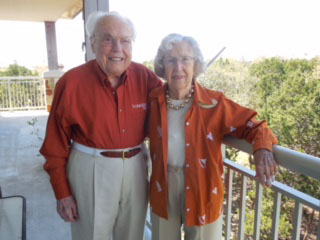 John Henderson and his wife of 77 years, Charlotte, live in Austin in the independent living section of Longhorn Village, a community of more than 360 seniors. They were the first people to move into the retirement community when it opened. (Sharon Jayson for KHN)

Genetics and behaviors do play roles in determining why some people live to be 100 or older while others don’t, but they aren’t guarantees. And now, as increasing numbers are reaching triple digits, figuring out the mysteries of longevity has taken on new importance among researchers.

Although those 100 and older make up a tiny segment of America’s population, U.S. Census reports show that centenarian ranks are growing. Between 1980 and 2010, the numbers rose from 32,194 to 53,364, an increase of almost 66 percent. The latest population estimate, released in July 2015, reflects 76,974 centenarians.

“The number of centenarians in the U.S. and other countries has been doubling roughly every eight years,” said James Vaupel, founding director of the Max Planck Institute for Demographic Research in Rostock, Germany.

“When the baby boomers hit, there’s going to be acceleration, and it might be doubling every five or six years,” he said. 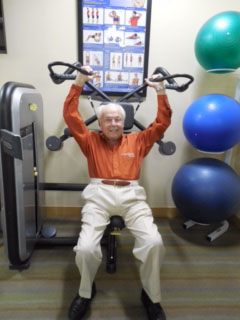 Henderson and his wife of 77 years live in Austin in the independent living section of Longhorn Village, a community of more than 360 seniors, many of whom have ties to the University of Texas at Austin. Henderson is UT’s oldest-living former football player, arriving in 1932 as a freshman. They’re the only centenarians in the complex and are a rare breed: married centenarians.

Charlotte Henderson said she believes being married may have helped them reach these 100-plus years.

“We had such a good time when John retired. We traveled a lot,” she said. “We just stay busy all the time, and I’m sure that helps.”

“I think it’s been such a wonderful marriage, and we’ve contributed to each other’s benefit,” he said.

Little research exists on the effects of marriage on longevity. One 2015 Belgian study of centenarians born between 1893 and 1903 did focus on their living arrangements during ages 60 and 100 and found “in very old age, living with a spouse is beneficial for men but not for women, for whom living alone is more advantageous than living with a spouse.” The study explained that “living with one’s spouse at the oldest ages does not provide the same level of protection as it does at younger ages. This may be explained by the decline of the caregiver’s own health as the needs of his or her spouse increase. Caregiving could also have negative consequences for the health and economic condition of the spouse who is the primary caregiver, especially for older women.”

However, Vaupel, who directs the Institute’s International Research Network on Aging, said being married is a positive for both.

“Especially if you’re quite old, it’s very helpful have a spouse. If you’re very old and don’t have a spouse, the chance of death is higher,” he said.

Siegel, who lives in a senior living community in Boca Raton, Fla., outlived two husbands. She never smoked and occasionally has a glass of dry, red wine.

“I am not a big eater. I don’t eat much meat,” said Siegel, who said she weighs 90 pounds and used to be 5 feet tall but is shrinking.

She stays active by walking inside the building about a half-hour each day, playing bridge twice a week and exercising.

“I feel that’s what really kept my body pretty good. It wasn’t sports. It was exercises,” she said of the routine she does daily twice a day for about 20 minutes.

He was a fighter pilot in the Marine Corps during World War II and spent eight years in active duty, which Miller said “was not so good for me because I sat in the cockpit of a plane for 5,000 hours.”

But, he was active as a youth — running track, playing football and spending hours surfing while living in Honolulu. 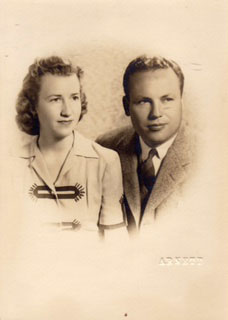 Charlotte and John Henderson, now 102 and 104 years old respectively, have been married for 77 years. Charlotte said she believes being married may have helped them reach these 100-plus years. (Courtesy of the Henderson family)

Miller is gluten-free because of allergies and doesn’t eat many carbohydrates. He also never smoked. And, he still enjoys a scotch in the evening.

The Hendersons usually have wine or a cocktail before dinner. She never smoked. He quit in 1950.

Hirsh, of Dallas, another non-smoker, attributes his long life to “good luck.”

“I was very active in my business and did a lot of walking during the day. I was not sedentary,” he said.

Now, exercise is limited to “some knee bends every morning to keep my legs stronger.”

“My father died of a heart attack in his early 50s, and my mother died in her early 60s of a stroke, so I don’t think my genes were very good,” Hirsh said.

Geriatrician Thomas Perls, director of the New England Centenarian Study at Boston Medical Center, said research shows that behaviors have a greater influence on survival up until the late 80s, since he said most people have the right genes to get there as long as their behaviors aren’t harmful. But once people reach the 90s and beyond, genetics play a more significant role.

“To get to these very oldest ages, you really have to have the right genes in your corner,” he said.

As an international leader in the field, Perls’ focus is on finding the right mix of behavior, environment and genetics to produce long lives. His work includes a National Institute on Aging study called the Long Life Family Study.

“There are always questions about environment versus genes,” said endocrinologist Nir Barzilai, founding director of the Institute for Aging Research at the Albert Einstein College of Medicine in Bronx, N.Y. “We are with our genes in this environment. It’s really 50-50, no matter how you look at it.”

Barzilai’s studies include centenarians and their children, as well as efforts to slow the process of aging.

Among those who reach the 100-year-old milestone, Perls’ said his research and that of Barzilai and others has found certain commonalities: few smoke, nearly all of the men are lean, and centenarians have high levels of the “good cholesterol.” Studies show that whatever their stress level, they manage its well. And they’re related to other centenarians or have a parent or grandparent who lived past 80.

These lessons of long life are playing well with the public, who have made changes for the better in the 21st century, Vaupel said.

“We don’t smoke or drink so much, and we’re better at exercise. People are taking better care of themselves. People are better educated, and the more educated know when to go to the doctor and follow the doctor’s advice,” he said, adding that people now tend to have higher income and can spend more on health care and improved diet.

Want To Live Past 100? Centenarians Share Secrets Of Knee Bends And Nips Of Scotch