SANTA BARBARA, Calif. — Retiree Leslie Robinson-Stone and her husband enjoyed a weeklong, all-expenses-paid trip to a luxury resort — all thanks to the county she worked for.

The couple also received more than a thousand dollars in spending money and a personal concierge, who attended to their every need. For Santa Barbara County, it was money well spent: Sending Robinson-Stone 250 miles away for knee replacement surgery near San Diego saved the government $30,000. 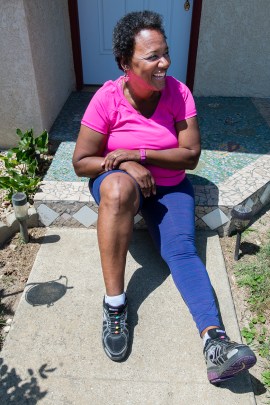 Leslie Robinson-Stone, a Santa Barbara County retiree, sits on her front step at her home in Lompoc, Calif. Her former employer sent her 250 miles away for knee replacement surgery at a hospital near San Diego and saved $30,000. (Heidi de Marco/California Healthline)

“The only difference between our two hospitals is one is expensive and the other is exorbitant,” said Andreas Pyper, assistant director of human resources for Santa Barbara County, referring to the local options.

Frustration with sky-high hospital bills and a lack of local competition is common to many employers and consumers across the country after years of industry consolidation. Fed up with wildly different price tags for routine operations, some private employers are steering patients they insure to top-performing providers who offer bargain prices. Santa Barbara County, with about 4,000 employees, is among a handful of public entities to join them.

The county has saved nearly 50 percent on four surgery cases since starting its out-of-town program last year, officials said. The program is voluntary for covered employees.

At a Scripps Health hospital in the San Diego area, the county paid $61,600 for a spinal fusion surgery that would have cost more than twice as much locally. It avoided two other operations altogether after patients went outside the area for second opinions.

Typically, employers are seeking deals through “bundled payments” — in which one fixed price covers tests, physician fees and hospital charges. And if complications arise, providers are on the hook financially. Medicare began experimenting with this method during the Obama administration.

Santa Barbara County is among about 400 employers on the West Coast working with Carrum Health, a South San Francisco start-up that negotiates bundled prices and chooses surgeons based on data on complications and readmissions.

“Not all surgeons are equal. We don’t want to give Scripps a blank check. That defeats the whole purpose,” said Sachin Jain, Carrum’s chief executive.

Santa Barbara officials try to persuade workers and their family members to participate in its program by waiving copays and deductibles. The county pays about $2,700 in travel costs and still comes out way ahead.

“If that doesn’t speak to the inefficiencies in our health care system, I don’t know what does,” Pyper said. “It’s almost like buying a Toyota Corolla for $50,000 and then going to San Diego to buy the same Corolla for $16,000. How long would the more expensive Toyota dealership last?”

Even as more employers and insurers embrace bundled payments, the Trump administration is applying the brakes. In August, Medicare officials proposed canceling mandatory bundled payments for certain surgeries and scaling back the program for knee and hip replacements. Health and Human Services Secretary Tom Price, when he was still a member of Congress, accused Medicare of overstepping federal authority and interfering in the doctor-patient relationship. Hospital trade groups have voiced similar objections.

That leaves some health-policy experts dismayed.

“These bundled payments put pressure on medical providers … and the savings are astonishing,” said Bob Kocher, a former health official in the Obama administration and now a partner in the venture capital firm Venrock.

Santa Barbara County officials said they had no choice after seeing their medical costs soar by 15 percent in each of the past two years. Like many local governments, it has an older workforce prone to chronic illness, blocked arteries and bum knees.

But health costs run higher than the state average in this scenic coastal county of about 450,000 people, according to data from Oakland-based Integrated Healthcare Association. By one measure, the average health insurance premium in the individual market runs $660 a month in Santa Barbara, 27 percent higher than in Los Angeles.

Still, Maya Barraza, the county’s manager for employee benefits and rewards, knew the program would be a hard sell to workers. “You don’t want to be away from your family and what’s familiar,” she said.

Cottage Health, the county’s largest health system, says it wants to keep patients in town for treatment and follow-up care.

Established in 1891, it’s grown from a single hospital to more than 500 beds across three hospitals, and annual revenue hit $746 million last year.

Valet attendants greet visitors at two entrances outside the group’s white, Spanish-style hospital in the city of Santa Barbara. In the main lobby, the names of wealthy donors are splashed across one wall, including billionaire investor and Donald Trump confidant Thomas Barrack.

“We are continually looking at reducing costs and improving quality,” said Cottage Health spokeswoman Maria Zate. “Cottage Health has some of the top surgeons in California.”

Both Cottage and Dignity hospitals in Santa Barbara County have quality scores of fair to excellent for joint replacements, spinal procedures and coronary bypass surgeries, according to three years of Medicare data analyzed by research firm Mpirica Health.

Several other companies, such as Health Design Plus, are also assisting employers, insurers and patients with the logistics of surgery shopping. Boeing and other large employers are the most aggressive at pursuing bundled pricing and sending workers across the country for care.

Since 2014, more than 2,000 joint replacement and spinal surgeries have been performed for fixed prices through the Pacific Business Group on Health’s “centers of excellence” program, which includes employers such as JetBlue and Lowe’s. It added gastric bypass and other bariatric surgeries last year, and the employer group is working on bundled prices for cancer treatment.

Some companies have gone so far as to send patients overseas for cheaper care, but most employers favor a more regional approach, experts say. Workers still rely on local physicians for follow-up care.

Municipalities, school districts and other public employers have been slower to adopt some of these strategies, perhaps to avoid the political risk of antagonizing local providers, some researchers suggest.

For some hospitals, there are advantages in offering deep discounts: They get patients they otherwise would never see and are paid in full right after the patient is discharged, avoiding the onerous billing and collections process.

They also have the financial capacity to offer such sharply reduced prices.

“There are immense profit margins built into those cases,” Bark said.

Robinson-Stone, a former county sheriff’s deputy and a computer support specialist, was initially wary of traveling for her surgery. But the 62-year-old Lompoc resident had ongoing pain that kept her from biking, walking her dogs and tending to her fruit trees. Medication and cortisone shots didn’t work, and she had no ties to local surgeons. So she signed up online and was given a choice of six orthopedic surgeons at Scripps Green Hospital in La Jolla. 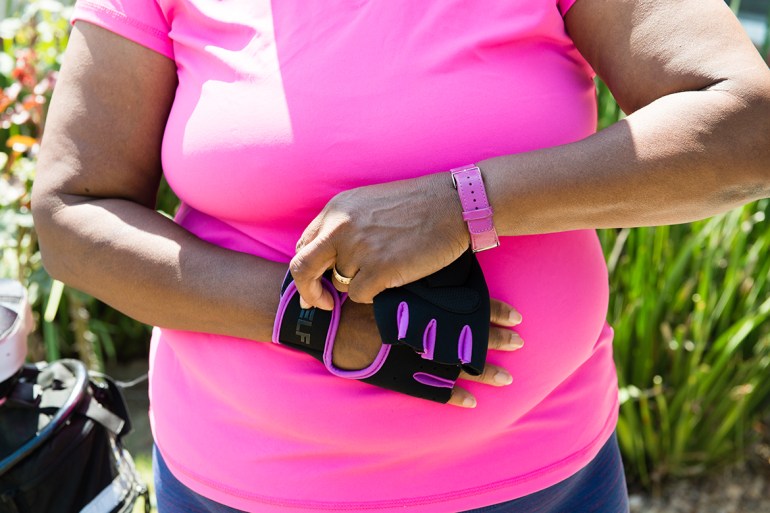 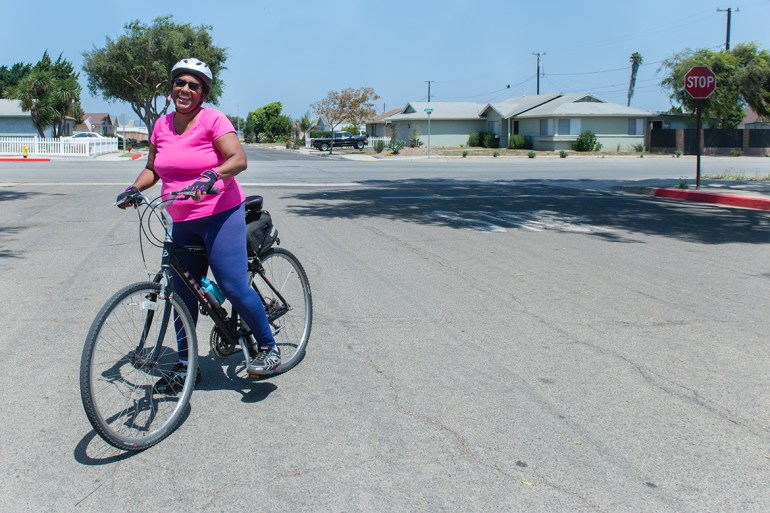 The 62-year-old said she had ongoing knee pain that kept her from biking, walking her dogs and tending to her fruit trees. (Heidi de Marco/California Healthline)

In June 2016, she and her husband, Frank Stone, checked in at the Estancia La Jolla Hotel and Spa.

Robinson-Stone met the surgeon on a Wednesday, had the operation the next day and returned to her hotel room by Saturday. She continued physical therapy at the hotel and returned to the hospital a few days later to have the staples removed.

She was back on her bike within two months and eventually lost about 20 pounds.

“I just celebrated one year from surgery,” she said, “and I’m a happy camper.”

Heidi DeMarco contributed to this story.