Dinners at an expensive restaurant in Maui — with ocean views. Tickets to professional sports games. A free screening of “Black Panther” at a Sacramento IMAX theater. And a $250,000 donation to a group that funds the governor’s travel.

That’s just a sampling of the $11.8 million that soft drink companies and their lobbyists spent at the state and local levels in the past two years in California to block proposals such as taxing sugary beverages and slapping health warnings on their drinks, a California Healthline analysis found.

“They exercise extraordinary influence in this building,” state Sen. Bill Monning (D-Carmel) said of the industry. “We don’t underestimate the power of the opposition.”

Monning doesn’t accept soda industry money — and has tried repeatedly to tax sugary beverages in California and place warning labels on packaging. He was one of the most vocal critics last year when the industry blocked cities and counties from levying soda taxes — a maneuver some lawmakers described as “extortion.”

Angered by the industry’s tactics, Monning and other lawmakers now are pushing a package of bills to clamp down on drinks they say contribute to rising rates of obesity and diabetes. Several of the measures are scheduled for a committee hearing Tuesday, including one that would tax distributors of sugary drinks at 2 cents an ounce.

Connecticut, Massachusetts, New York, Rhode Island and Vermont also are considering statewide taxes on sugar-sweetened beverages. At least four states, including Arkansas and West Virginia, already impose taxes on sodas, either by the fluid ounce or on gross receipts, according to the National Conference of State Legislatures. 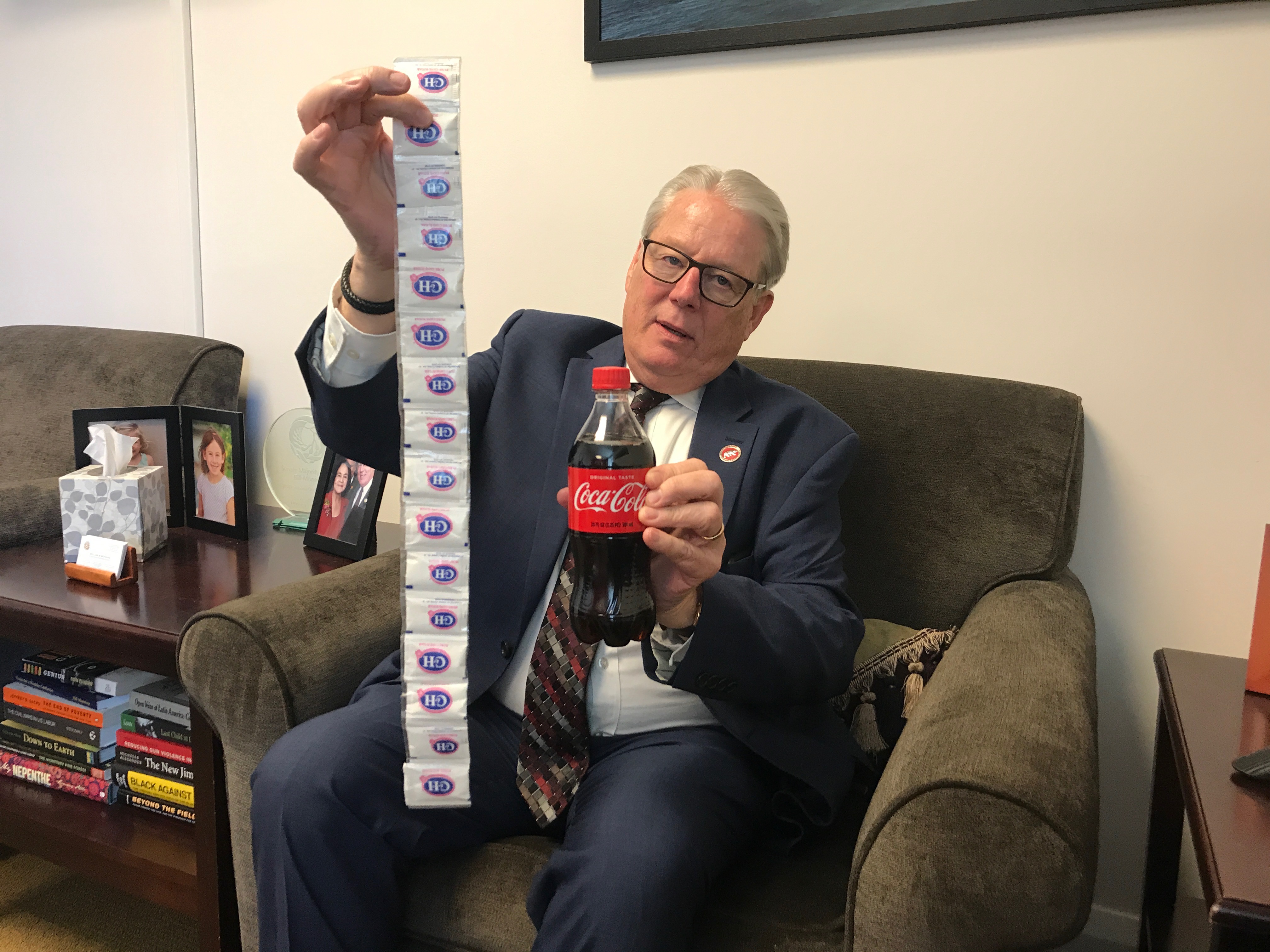 California Sen. Bill Monning (D-Carmel) displays the amount of sugar in a 20-ounce bottle of Coca-Cola. Monning is pushing legislation that would put health warning labels on sugary drinks. He describes the soda industry as a big influencer in California politics.(Samantha Young/California Healthline)

Although it’s anybody’s guess how much the industry will spend to sway California lawmakers this year, its previous largesse indicates money will flow to nearly every Capitol officeholder.

A California Healthline analysis found that 9 in 10 state senators and members of the Assembly, or a member of their staff, accepted a campaign contribution, gift or charitable donation in 2017 and 2018 from the American Beverage Association (or its political action committee), the Coca-Cola Co. or PepsiCo — the three largest givers in the industry.

The beverage industry, like other interest groups, spends money to influence lawmakers in several ways: It makes financial contributions to their campaigns and lobbies them and their staffs, sometimes plying them with meals, events and travel. It also donates to charities in lawmakers’ names.

“They follow the playbook of the tobacco industry in protecting their products from criticism, casting doubt on the science, lobbying, working behind the scenes, funding front groups, doing all the things that industries that make potential harmful products do,” said Marion Nestle, author of “Soda Politics” and a professor emerita of food nutrition at New York University.

The beverage association and Coca-Coca did not respond to specific questions about their political giving, and PepsiCo didn’t respond at all. William Dermody Jr., an ABA vice president, argued “excessive” taxes on drinks would harm the economy.

“It’s important to inform lawmakers about the contributions that our products make to the local economy, not only the millions in tax revenues we generate for the state but the wages we bolster for hundreds of thousands of California workers,” Dermody said in an email.

Big Soda is not alone in trying to influence lawmakers on the issue of sugary drinks.

The California Medical Association and the California Dental Association, which represent doctors and dentists, are planning a ballot initiative to tax sugary drinks. Together they spent about $10.6 million in lobbying and campaign contributions to influence a broad range of health-related legislation over the past two years.

For the soda industry, 2017-18 was particularly expensive.

Why? As more California cities passed and proposed local taxes on sugary beverages, soda companies last year poured $8.9 million into a statewide ballot measure that would have made it more difficult for cities to levy any new tax, not just those on beverages. The money came from the American Beverage Association PAC, primarily funded by Coca-Cola, Pepsi and Dr Pepper Snapple Group.

Concerned that California voters would approve a higher voting threshold for all local taxes, lawmakers reluctantly banned local soda taxes until Jan. 1, 2031, if the industry dropped its ballot proposal.

“I don’t think they won any friends in the legislature,” said Assemblywoman Lorena Gonzalez (D-San Diego). She received $11,000 in campaign contributions from the industry in the past two years, and has voted on its side against bills to label and tax sugary drinks, citing concerns that a soda tax is regressive and would harm poor, minority communities. 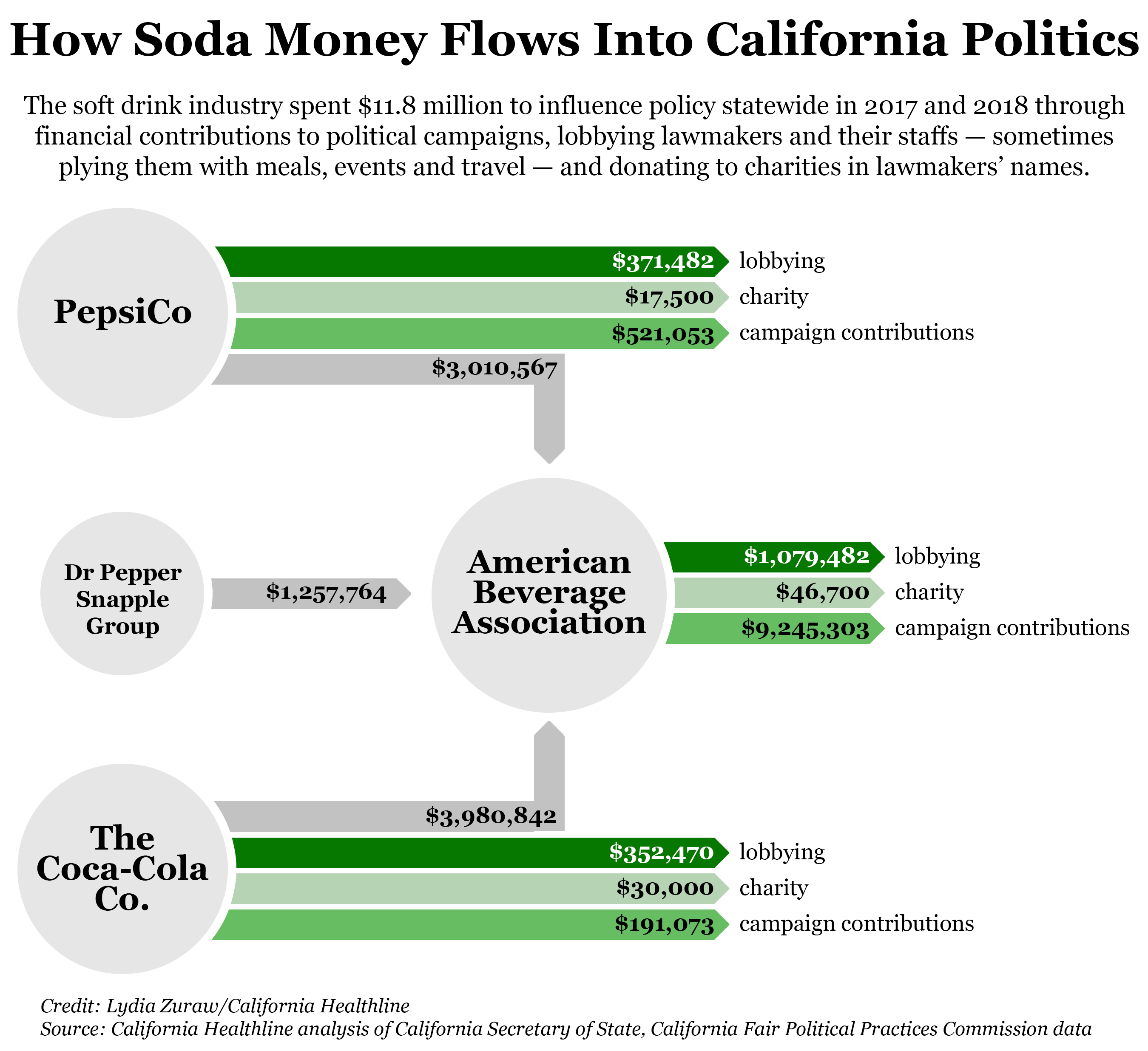 Entertaining Lawmakers And Their Staffs

In 2017 and 2018, the American Beverage Association spent just over $1 million lobbying California policymakers, while PepsiCo spent $371,482 and Coca-Cola spent $352,469, according to forms filed with the California Secretary of State’s office. That’s nearly 70 percent more than they spent in the previous two years.

The bulk of the money went to lobbying firms staffed by former government employees — people with connections at the Capitol who know how to influence legislation.

The ABA spent $379 on food for eight lawmakers in November 2017 as part of an $813 dinner tab at the upscale Humble Market Kitchin Restaurant in Maui — where a steak might go for $65 and a whole fried fish for $57. The legislators were attending a legislative retreat.

The association gave 11 legislative staffers tickets to Sacramento Kings basketball games and paid for their food and drinks, at a cost ranging from $163 to $326 per staffer. It also shelled out at least $3,747 for at least 92 lawmakers, staff members and their guests to attend a showing of “Black Panther” in March 2018.

Asked why Assemblywoman Sabrina Cervantes (D-Riverside) attended the movie, her spokeswoman said she is “supportive of the arts and celebrates diversity in cinema.”

The ABA’s biggest lobbying expense was a $250,000 payment to the California State Protocol Foundation, which funded Jerry Brown’s travel while he was governor.

In The Name Of Charity

While there are limits on how much lawmakers can accept in gifts, companies also seek to gain influence by making unlimited charitable donations on a lawmaker’s behalf. These donations are known as “behested payments,” and the industry made nearly $100,000 of them in 2017 and 2018. 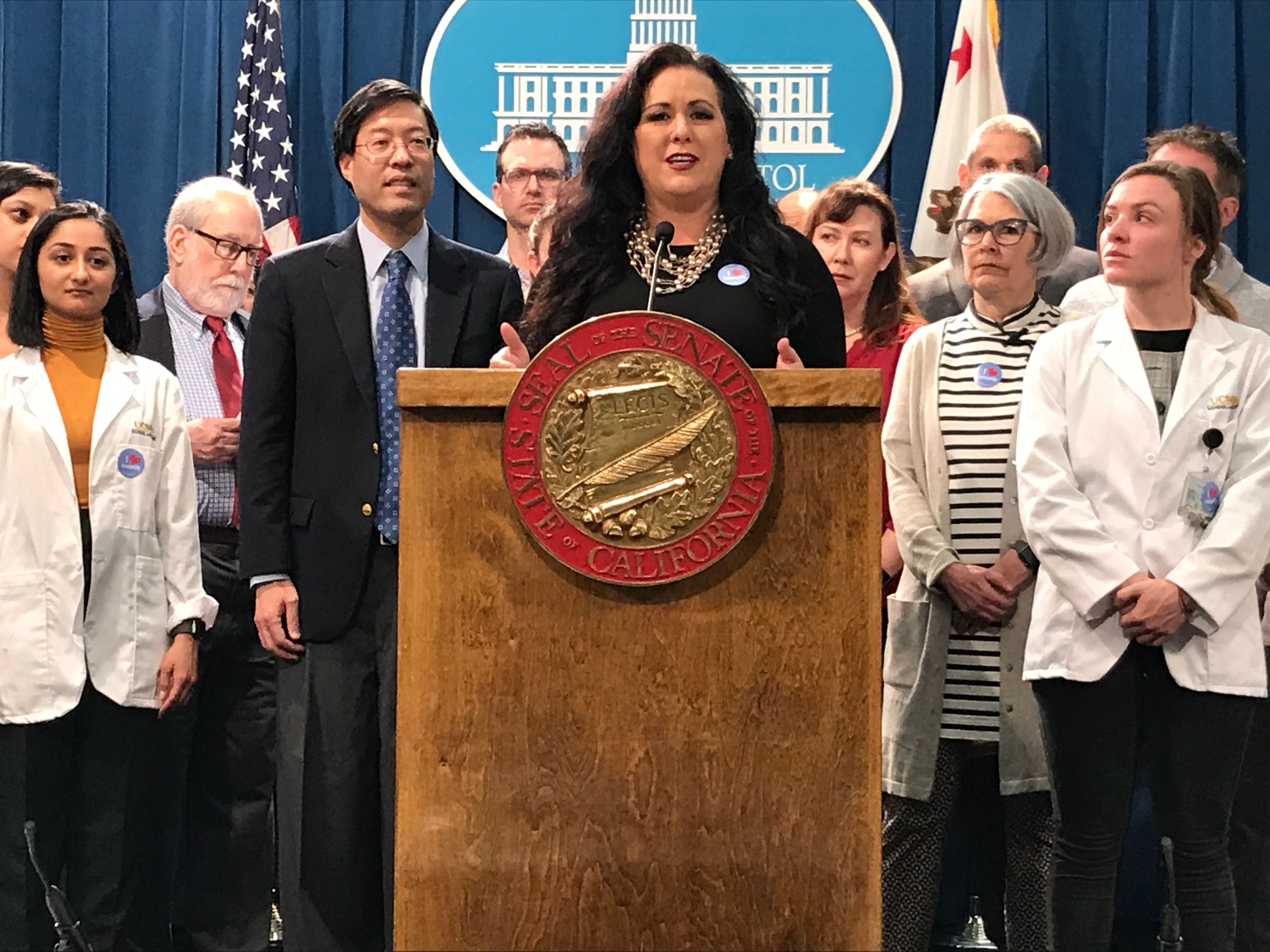 State Assemblywoman Lorena Gonzalez (D-San Diego) is skeptical of soda taxes and their impact on low-income and minority communities. But she says the soda industry didn’t win any friends last year when it maneuvered a vote to ban local soda taxes.(Samantha Young/California Healthline)

Last year, a Coca-Cola distributor in Gonzalez’s district donated $10,000 to the San Diego Food Bank in her name — a contribution she said she was unaware of until contacted for this article.

Sometimes, lawmakers seek out contributions. When state Assemblyman Adam Gray (D-Merced) asked the beverage association to sponsor the annual meeting of the National Conference of State Legislatures, the association gave $25,000 in his name. Gray, who served as California’s representative to the meeting, said it was his responsibility to secure sponsors, and that he asked several corporations to contribute.

Those contributions, he said, don’t influence his vote. For example, he said Google gave $100,000 but he voted for privacy legislation the company opposed.

“If you want to support my agenda, my voting record and the things I stand for, I’m happy to take that support,” Gray said. “But it has zero role in how I represent my district or how I make decisions on public policy.”

The most direct method that interest groups use to influence the political process is by giving money to campaigns, political parties and legislative caucuses.

Along with spending $8.9 million on the statewide ballot measure, the American Beverage Association PAC, PepsiCo and Coca-Cola gave about $1.1 million to other statewide and local political efforts in the past two years.

The majority of legislators received campaign cash from the beverage association, Coke or Pepsi — if not all three.

A spokesman for Coca-Cola said the company selects recipients based on committee assignments, caucus memberships, leadership positions and whether they represent regions with Coca-Cola facilities.

“There is no one-size-fits-all approach,” said company spokesman Max Davis. “At times, the individual views of candidates we support may vary from our own.”

Monning said the soft drink industry is a formidable adversary. Many colleagues tell him they can’t vote for legislation that would cut sales because they have a distributor in their district.

In addition to a statewide soda tax, the bills under consideration this year would require warning labels about sugar and prevent soda companies from offering retailers incentives to sell their drinks. They also would ban retailers from selling supersize sodas and prohibit sales in checkout lanes.

As lawmakers consider these bills, Monning said, his question to his colleagues will be simple:

Among the ways soda companies try to exert influence on the political process is by contributing money to campaigns; hiring lobbyists and plying elected officials with drinks, meals and event tickets and making charitable contributions on the behalf of lawmakers.

To track lobbying, we created a spreadsheet of expenses reported on lobbying disclosure forms, also available on the secretary of state’s website, by the American Beverage Association, Coca-Cola and Pepsi. We found details about how much the industry paid lobbying firms and which lawmakers, or members of their staff, accepted gifts.

To find how much these entities gave in charitable contributions, California Healthline pulled data described as “behested payments” from the California Fair Political Practices Commission website. These are payments special interests can make to a charity or organization on behalf of a lawmaker. Sometimes, a few of these payments also show up on lobbying forms. We compared the behested payments with the lobbying reports to ensure we did not double-count money.

[Correction: A caption was updated at 4:50 p.m. PT on April 8 to correctly describe the size of a bottle of Coca-Cola.]