President Donald Trump has repeatedly condemned U.S. immigration policy, arguing that many immigrants pose a threat to the nation and drain U.S. resources. But a study released Monday about health insurance challenges the president’s portrayal.

The study in the journal Health Affairs found that immigrants covered by private health insurance and their employers contributed nearly $25 billion more in premiums in 2014 than was spent on their care. Those in the country without legal status contributed nearly $8 billion toward the surplus.

In contrast, U.S.-born enrollees spent nearly $25 billion more than they paid for in premiums.

In California, where about a fourth of residents are foreign-born, immigrants and their employers contributed close to $28 billion more than what they spent between 2008 and 2014. Meanwhile, U.S. natives in the state also spent about $28 billion more than they contributed during the same period. According to the researchers, this reflects a relative young and healthy immigrant population, as well as this group’s reluctance to seek care.

These findings surface as the Trump administration’s immigration policies — including a plan to tie migrants’ efforts to get permission for permanent residency to their use of federal benefit programs — have come under scrutiny.

Earlier studies also found that immigrants contribute more to Medicare than they receive in benefits, but the authors of this study say it is the first to look at the effect in private insurance plans.

Leah Zallman, assistant professor of medicine at Harvard Medical School and lead author of the study, said her findings allude to the potentially negative consequences that tighter immigration policies could have on the health care industry.

“I think in today’s era … there’s so much concern about immigrants and immigration really sort of draining our resources in the U.S.,” Zallman said. “This really points to the critical role that immigrants have in actually subsidizing and maintaining our current systems.”

Researchers calculated the financial contributions and expenses of enrollees and their employers using two surveys created by the federal government. Plans sold on the federal health law’s insurance exchanges were not included because they “differ from other private insurance in important ways and are unavailable to undocumented people,” the study authors noted.

Anyone born outside of the United States was categorized as an immigrant. However, the surveys did not ask non-citizens with private coverage about their legal status. Researchers used national data on undocumented immigrants to estimate how many people in the study group illegally resided in the country.

In 2014, immigrants and their employers contributed $88.7 billion in private insurance premiums, but spent only $64 billion for care, according to the study’s findings. Of that group, undocumented immigrants alone paid more than $17 billion to private insurers but used only $9.4 billion.

Native-born consumers paid $616 billion in premiums and received nearly $641 billion in insurers’ payments for care. They also consistently outspent immigrants across all age groups. Among enrollees 65 and older, the U.S.-born made a net contribution of nearly $10,000 more toward their care than those born overseas, according to the study.

The researchers reported that, on average, individual immigrants nationally paid $1,123 more for premiums in 2014 than they received in insurance-covered care. U.S. natives instead cost insurers $163 on average.

“Our findings demonstrate that immigrants’ spending subsidizes the care of US-born Californians in the private insurance market,” Zallman and her research partners said in the study. Their findings, they added, also raise questions about the impact more restrictive immigration policies will have on the private insurance risk pool. 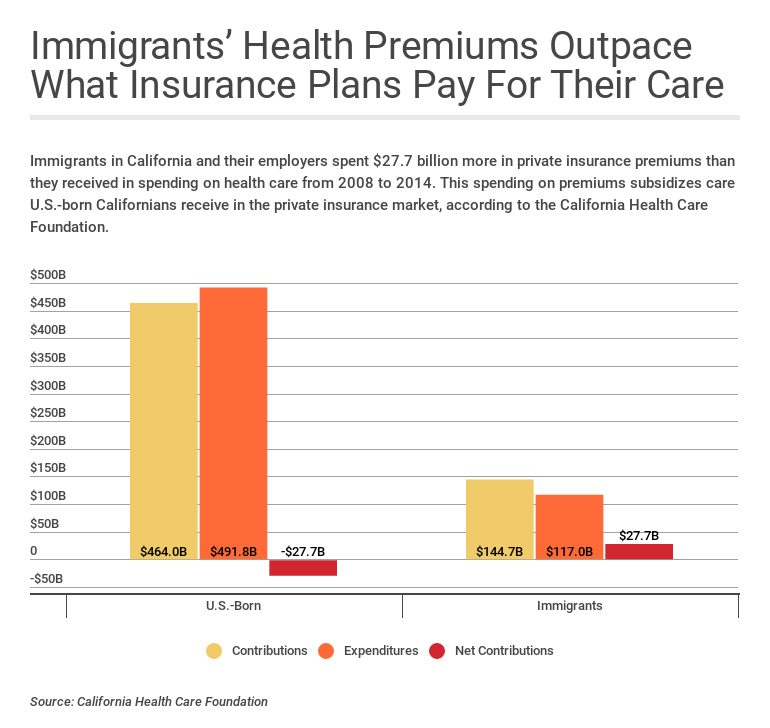 Leighton Ku, director of the Center for Health Policy Research at George Washington University who was not involved in the study, said several factors contribute to immigrants’ low health care expenses. The group tends to be healthier and younger when they arrive in the United States. Cultural and language differences also hinder them from accessing care.

The study noted that immigrants’ health care expenditures increased the longer they remained in the country. But it added that since their premiums also increased at the same time, they continued to make a net contribution to their private health plans.

The findings come about a week after the Department of Homeland Security proposed redefining how it would determine “public charge,” a term used to describe a person likely to become dependent on the government for assistance. The proposal would make it harder for immigrants to live and work permanently in the U.S. if they receive certain types of federal assistance, such as Medicaid, food stamps and housing subsidies.

Trump has vowed to be tough on immigration standards. During his campaign, he berated U.S. health expenditures on immigrants, arguing that the U.S. spent $11 billion for care to people who were in the country without authorization, the study’s authors note.

But they point out that earlier research shows that immigrants have low rates of health care use and spending, compared with native residents. Their payments to private plans and Medicare in essence prop up care for patients who are U.S.-born, the authors say.

A study Zallman published earlier showed unauthorized immigrants contributed $35.1 billion more to Medicare from 2000 to 2011 than they used in services.

Benedic Ippolito, an economist at the American Enterprise Institute, cautioned using the study’s findings to draw conclusions on a large scale about immigrants and their role in health insurance. An estimated 20 percent of immigrants — including nearly half of the undocumented population — are uninsured, according to the study. Ippolito said the cost of their uncompensated care affects whether immigrants’ financial contributions actually lead to surpluses for health care overall.

“I would be careful about how much I extrapolate these results to a) other parts of the health insurance market and b) even further to what this means for immigration policy,” Ippolito said. “This paper alone does not tell us everything we need to know.”

Ku echoed the uncertainty. He said he is not certain how the Trump administration’s latest actions will affect immigrants enrolled in private insurance. Having a private plan may suggest they are employed with a certain income stability. However, if enough immigrants leave the insurance market, he added, it may have the unintended consequence of making health plans more expensive for everyone else.

“That does have the following implication that to the extent that we do things to suppress immigrants or make it harder for them to purchase insurance then in that case we may do harm to the citizens,” he said.

California Healthline reporter Ana B. Ibarra contributed to this report.