Bonnie Castillo’s first experience with organized labor dates to the mid-1960s, when she was just 5. Her father was a railroad worker in Sacramento, Calif., and an active union member.

More than once, she and her mom drove him to a picket line, where workers demanded better pay and benefits.

“We’d pick him up within a matter of hours because they’d win,” Castillo, 57, recalled with a slight smile. “That was quite a time.”

Times have changed, but Castillo remains committed to organized labor. In March, she became the new executive director of one of the state’s strongest unions: the California Nurses Association/National Nurses United, which has about 100,000 members in the state.

The organization has flooded the state Capitol in a sea of red — the union’s official color — in the past year to demonstrate its support for a bill that would create a government-run, single-payer health care system in California. The bill stalled in the legislature last year because of its exorbitant price tag, estimated at $400 billion annually, but Castillo says the fight is not over. “I think it can happen in our lifetime,” she said.

Castillo’s predecessor, RoseAnn DeMoro, who served as executive director of the union for 32 years, was considered a fearless leader by some, unnecessarily aggressive by others.

Last year, after Assembly Speaker Anthony Rendon pulled the single-payer bill, DeMoro tweeted a picture of the iconic California grizzly bear being stabbed in the back with a knife emblazoned with Rendon’s name. The legislator — a Democrat — said he was besieged by death threats after that.

Most observers don’t expect this confrontational approach to change dramatically under Castillo; DeMoro began grooming her for the transfer of leadership several years ago. Democratic strategist Steve Maviglio, a critic of the union, told a Politico reporter in March that Castillo is DeMoro’s “Mini-Me.” They’re cut from the “same radical cloth,” he said.

Republican political analyst Kevin Eckery said that it’s fair to question the nurses’ “my-way-or-the-highway” approach to single-payer but that he believes the union’s tactics receive unfair scrutiny, in part because the majority of its members are female.

“I think some of the criticism that they received is really almost mansplaining,” he said. “Yeah, they’re aggressive. So?”

In addition to single-payer, Castillo wants additional workplace violence protections for nurses across the country, and she opposes a federal lawsuit that would allow public-sector workers to opt out of paying union dues, even if they’re covered by union contracts.

Unlike DeMoro, Castillo is a registered nurse. She worked as a critical care nurse in Sacramento for about 14 years until she left in 1998 to work for the union.

Castillo is also the first Latina to hold the title of executive director in the 115-year history of the organization. And though she echoes DeMoro in some ways, Castillo commands a crowd with an assertiveness that’s all her own.

“She might not be as loud about it, but she is definitely a fighter,” said Deborah Burger, co-president of the union, and a member of the board that appointed Castillo to her new gig.

California Healthline recently sat down with Castillo in her Oakland office to discuss her new role. 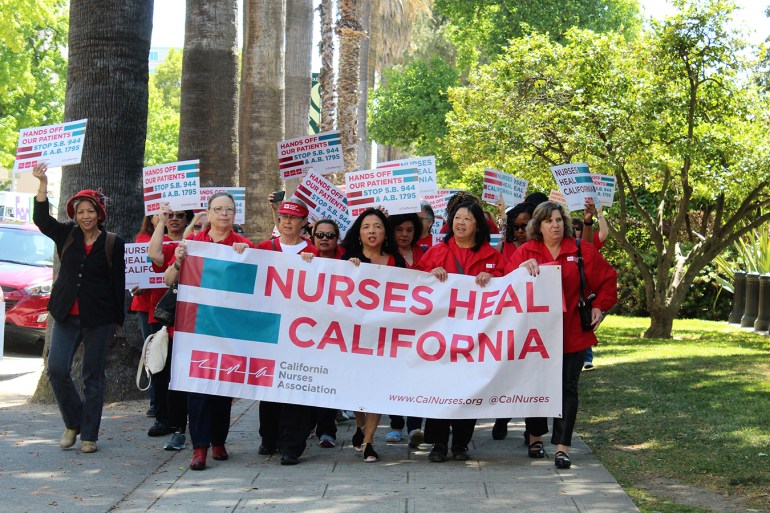 Bonnie Castillo leads nurses to the south steps of the state Capitol on May 1 to meet with legislators, just days ahead of National Nurses Week. (Ana B. Ibarra/California Healthline) 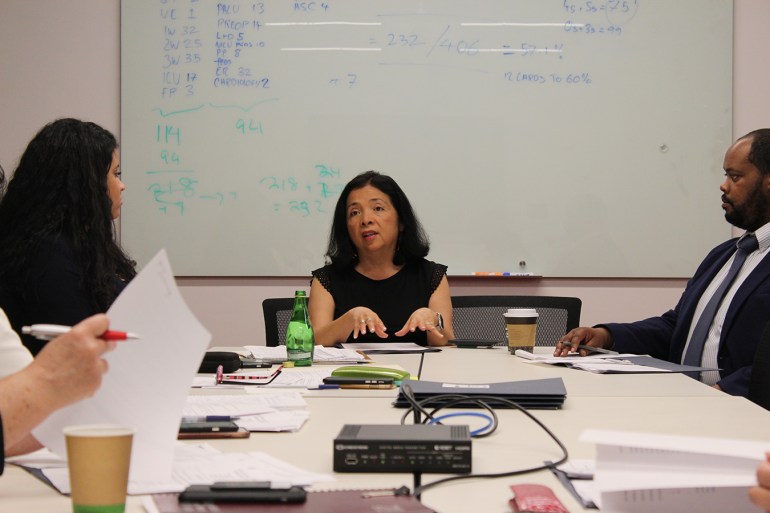 Castillo discusses workplace violence protections for nurses with a committee at the California Nurses Association’s Oakland office during a March meeting. (Ana B. Ibarra/California Healthline)

Q: We often hear that nurses go into the field to help others. You first started volunteering with the union in 1996, when you were a nurse at the now-defunct American River Hospital in Sacramento. What ultimately drove you to leave nursing and work for the union full time?

It was pretty clear to me within a couple of years of being a young registered nurse that the needs of myself and my co-workers weren’t being adequately addressed through dealing with management directly. We needed more staffing, more resources, but [hospital administrators] were constantly watching the bottom line. When we organized and won a strong contract, we realized this would actually affect our ability to give better care.

This process of bringing nurses together, predominantly women, strong women, to work collectively was something that was so invigorating and exciting that I felt the need to continue to do this. It was a big decision because I also loved my patients, but I felt … like I could play a big role in making sure that every registered nurse had a voice on the job.

Q: Last year, the legislature pulled SB 562, the single-payer bill that the union had sponsored. Instead of picking it up again this year, Democratic lawmakers are backing a gradual approach to universal coverage. Are you giving up on single-payer?

We understand that these legislators are not going to do this on their own. It’s going to take a movement of their constituents, nurses and other health care professionals. Legislators are going to need an intense amount of pressure, and that’s what we’re doing: We’re knocking on every door, we’re meeting and organizing. Our approach and our model of organizing is what has allowed us to be successful. This is a big one, there’s no doubt about it.

Q: Some people have called the union’s approach “aggressive.” What’s your response to that?

I feel like they do that to women in general. If women are militant or asserting themselves strongly, they’ll come up with these names that are somewhat derogatory or demeaning. That’s typical bullying behavior. Nurses … know how to deal with bullies. You really can’t pay much attention to that.

Q: Many of these comments came after your predecessor tweeted a picture of a California grizzly bear being stabbed in the back with a knife emblazoned with the name of Assembly Speaker Rendon. What was the deal with that?

The bear with the knife was symbolic. It was symbolic of an attack on our democracy. Nurses don’t hurt people, they help people. I love art … and I love the use of art symbolically. I know there are a lot of folks who get threatened by different forms of art, and when I looked at [those comments] I thought … ‘Are you trying to insinuate that knife was meant for someone?’ It was like, c’mon.

Q: Besides single-payer, you’re focusing on Janus v. AFSCME, the lawsuit that addresses whether non-union members should have to pay dues. Can you explain why you’re concerned?

Right now, what’s happening at the federal level is they are threatening our right to exist.

I need to lead this fight against this massive assault. [In this case], you would no longer be able to … collect dues [from non-members]. Obviously, in order to effectively advocate and legislate, everybody pays their fair share. What Janus would do is make that essentially illegal.