In the first three months after getting his Dexcom continuous glucose monitor, Ric Peralta said, he reduced his average blood sugar level by 3 percentage points.

“It took me from not-very-well-managed blood sugar to something that was incredibly well managed,” said Peralta, a 46-year-old optician in Whittier, Calif., who was diagnosed with Type 1 diabetes in 2008.

Peralta was so enthused that he became a “Dexcom Warrior,” a sort of grassroots spokesman for the product, manufactured by San Diego-based Dexcom. It became hard to imagine life without his new monitor, a device that lets him track the trends in his blood sugar 24 hours a day on his smartphone. And yet, he has spent weeks at a time without the device over the past year because of insurance restrictions. Physician groups and patients consider those rules burdensome, but insurers defend them as necessary.

Diabetes activists and legislators have started to focus attention on the surging price of insulin, leading to legislative pushes, lawsuits and congressional hearings. But insulin isn’t the only thing people with Type 1 diabetes are struggling to get. Managing the condition requires other essential, often lifesaving medical supplies. And patients frequently face hurdles in getting access to those supplies — hurdles put in place by insurance companies.

Peralta learned about the latest version of the Dexcom continuous glucose monitor from the mother of one of his patients. He visited the company’s website and, within two weeks, the device was shipped to his front door.

“I still didn’t 100% appreciate exactly how it was going to change my life,” Peralta said. “It was amazing.”

Typically, people with Type 1 diabetes check their blood sugar by drawing a drop of blood from a finger and placing it on a disposable test strip that’s read by a blood glucose meter. Doctors suggest checking blood sugar this way between four and 10 times a day. These readings are crucial for helping people with diabetes manage their blood sugar — keeping it from getting too low, which can lead to sudden seizures and loss of consciousness, as well as from getting too high, which can cause vision loss and nerve damage and can even, over time, lead to amputations.

Instead, Peralta’s continuous glucose monitor gave accurate blood sugar readings every five minutes. That’s 288 readings a day, or about 278 more readings than even the most conscientious patients get the old-fashioned way.

“When I had to do the old-fashioned finger prick test, I was only doing that right before I ate, so I could see how much [insulin] I was supposed to take,” Peralta said. (People with Type 1 diabetes have to take multiple daily shots of insulin to keep their blood sugar within the normal range because their bodies stop producing the naturally occurring hormone.) 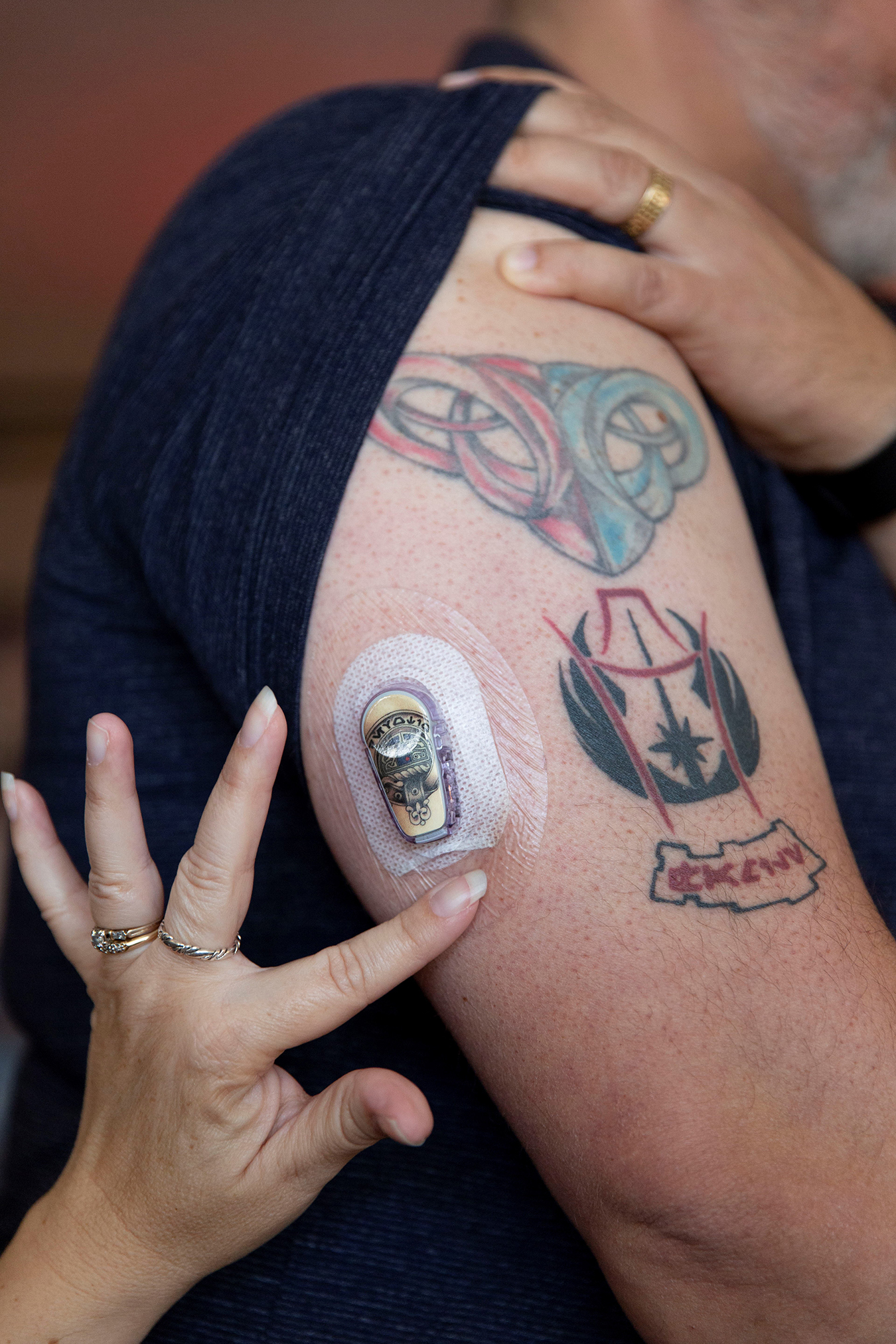 In their home in Whittier, Calif., Lisa Peralta pats Ric’s Dexcom sensor to make sure it’s staying on his arm. Before he got the device, Ric had to check his blood glucose via multiple finger pricks and plastic test strips every few hours. (Allison Zaucha for NPR)

“I didn’t realize that I had rather severe [blood sugar] peaks and valleys in between my mealtimes,” Peralta said.

Tighter control of blood sugar can reduce the risk of heart disease, kidney failure and nerve damage. For Peralta, it also offered peace of mind.

The monitor sounds an alarm when his blood sugar gets dangerously low; Peralta said his co-workers have started bringing him sugary snacks when they hear the alarm, to help him raise his blood sugar back to normal. When he takes his family on road trips — a favorite activity — he no longer has to worry about the possibility of passing out while driving.

“It even syncs with my car so I can just say, ‘Siri, what’s my blood sugar?’ And it will come over the car stereo system,” Peralta said. “I’m safe for my family.”

When common chronic conditions such as diabetes are well controlled, it prevents worsening disease and saves money for the health system and the patient.

But Peralta said his efforts to use this new tool consistently to manage his diabetes have been stymied by insurance problems that began about a year ago.

The newest Dexcom continuous glucose monitor has three parts: a sensor that measures glucose levels, a transmitter that sends out the sensor’s readings wirelessly and a receiver that displays those readings on a screen.

For each of these parts, Peralta needs “prior authorization” — a requirement that his physician get approval from his insurance company before prescribing the device.

The Dexcom sensors last about 10 days each, and Peralta’s insurance allows him to buy a three-month supply at a time. But he also has to get prior authorization for each supply, meaning every three months his doctor needs to reconfirm with his insurance company that the sensors are medically necessary. Same goes for the device’s transmitters — which last about six months each.

“Prior authorizations are in place to protect patients, to improve safety and to try to make sure that the care they receive is as safe as possible and also as affordable as possible,” said Kate Berry of the trade group America’s Health Insurance Programs.

But to Ric Peralta, the requirement is a burden.

The most recent snafu happened in March. Peralta ordered a new supply of sensors directly from Dexcom but said the company submitted a request for approval of a new transmitter as well. And because his insurance approves the sensors and transmitters on different authorization timelines, the whole claim was denied. Peralta estimates he spent four hours on the phone with Dexcom and his insurer over the next month and a half to sort it all out. During that time he had to revert to finger-stick tests.

“It’s maddening,” Peralta said. “If I do not have my proper management of this disease, I’m going to die from it. And they’re making it as difficult as possible.”

A Burden On Doctors, Too

Prior authorizations have become a major concern of physicians across the U.S. health care system, as evidenced by a December survey by the American Medical Association.

Of the 1,000 physicians surveyed, 91% said prior authorizations “have a negative impact on patient clinical outcomes”; 75% said the requirements “can at least sometimes lead to patients abandoning a recommended course of treatment”; and 28% said the prior-authorization process had “led to serious or life-threatening events” for their patients.

“In my practice, we have five individual physicians, and we hired five full-time employees whose primary duty is obtaining prior authorization and dealing with insurance companies,” said Dr. Bruce Scott, an otolaryngologist from Kentucky and speaker of the AMA House of Delegates.

“Prior authorization is a burden on providers and diverts valuable resources,” Scott said. “That’s a problem.”

The AMA has even created a website that catalogs stories of patients and providers who say they’ve struggled to gain access to important medical products and procedures because of problems with getting prior authorization from insurers — everything from pain medication for a cancer patient to X-rays in the ER. Scott said the AMA doesn’t expect insurers to completely do away with requirements for prior authorization, “but we believe that it should be focused and that it should be better planned.”

The American Association of Clinical Endocrinologists — an organization of the physicians whose specialty is often associated with diabetes treatment — goes further.

“We feel that physicians that are specialists in endocrine disease should not be required to fill out prior authorizations for endocrine treatments,” said Dr. Scott Isaacs, an endocrinologist from Atlanta and a member of the board of directors of AACE.

Who Bears The Greatest Burden?

For Ric Peralta, the ultimate burden of getting all these prescriptions filled falls on him and other patients like him.

After his latest mix-up with the sensors in March, he discovered the battery in his transmitter had died.

Peralta made another frustrated call to Dexcom, and recently got a complimentary transmitter to get him back on the system while his formal order goes through the approval process.

“I’m quite nervous about what’s going to happen again in two months when I am needing to call in orders again,” Peralta said.

“Am I going to have to go through this whole thing over again?”

This story is part of NPR’s reporting partnership with Kaiser Health News.