Teenagers as young as 13  often play an active role in feeding their families,  taking jobs when they can or selling their possessions to help raise money for food, researchers found in a detailed look at hunger among adolescents.

In extreme cases, teens resorted to crime and sexual favors in exchange for nourishment.

Yet, according to the research, many cringed at the thought of using a local food bank.

“I will go without a meal if that’s the case,” said one girl in Chicago. “As long as my two young siblings is good, that’s all that really matters to me.”

The report, published Monday, is from the Urban Institute, an economic and social policy research group, and Feeding America, a national network of food banks. It is based on interviews of 193 teenagers in 20 focus groups across the country.

Researchers asked teens how they coped with hunger in their communities and what barriers prevented them from accessing food assistance programs. They discovered many teens shrink from seeking help for fear of being stigmatized.

Susan Popkin, senior fellow at the Urban Institute and co-author of the report, said teens engaging in risky behavior are often treated with disdain instead of being recognized as victims of sexual exploitation and the cycle of hunger.

The federal Department of Agriculture last week released the latest government estimate of household hunger, finding 13 million children and 29 million adults did not have sufficient food at some point in 2015. That is nearly 13 percent of the U.S. population.

In 13 of the 20 focus groups, participants in the Urban Institute study mentioned “selling their body” or “sex for money” as a viable strategy. While participants in nearly every focus group preferred finding a job to make ends meet, many had trouble finding work and school commitments made working more difficult, the teens noted.

Others simply went hungry so their siblings could eat.

Food insecurity in the U.S. garnered national attention after the Great Recession left millions of families in financial straits. The USDA found the number of households facing hunger shot up to nearly 15 percent in 2008. Nearly 17 million children went hungry in 2008.

The law also created the an initiative that enables schools serving in high-poverty areas to serve meals to every student for free without requiring them to provide family income details to qualify.

The law appears to have helped. In 2015, households facing food insecurity dipped below 14 percent for the first time since the economic downturn. More than 2 million children who faced food insecurity in 2014 obtained reliable access to food last year. 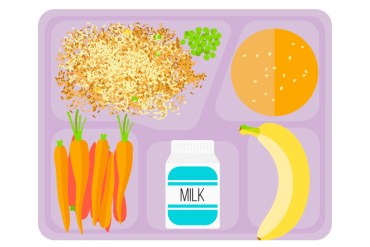 Despite that progress, teens reported that Supplemental Nutrition Assistance Program benefits — federal food assistance —do not provide enough food for the month. A study participant from rural North Carolina commented on how his peers’ actions change as food becomes scarce.

“By the end of the month you can tell by how the kids act. The kids might be aggravated,” he said. “You can tell, they’re depressed. You just know.”

The report also found teens didn’t know many of the resources available to them. In addition to feeling stigma, some participants perceived local food pantries as inaccessible and believed summer programs targeted small children, not adolescents.

The Grab ‘N’ Go breakfast initiative being used in many secondary schools around the country allows students to pick up a bag of breakfast foods in the morning and eat while in class, without arriving early to school.

FitzSimons credits the 2010 federal law with helping to assuage hunger in schools, but says gaps remain for teens.

“We do have like a solid nutritional safety net, but we do need to do more work to make sure kids are accessing the meals that are available through it,” FitzSimons said.