Health care heavyweights are pouring money into California’s gubernatorial campaign as the primary looms, ramping up support for front-runner Gavin Newsom and financing attack ads against one of his distant Democratic rivals, John Chiang.

One issue that seems to be driving health care industry donations — and the candidates’ health care rhetoric on the campaign trail — is the prospect of a government-run single-payer system.

Both Newsom, California’s Democratic lieutenant governor, and Chiang, the state treasurer, support the concept of single-payer, which would offer universal coverage to Californians, likely at a significant cost to the state. But in a twist, Newsom’s two most generous health care supporters fundamentally disagree on the idea.

The California Nurses Association union and Blue Shield of California each have contributed about $1 million to independent committees that support Newsom, according to a California Healthline analysis of campaign finance data. The powerful nurses union strongly supports single-payer health care, while that model of health care delivery could pose an existential threat to insurer Blue Shield.

There are some differences between the Democratic candidates’ positions.

Chiang told California Healthline in April that his health care priority would be to implement a single-payer, government-run health care system during his first term.

After strongly supporting legislation to implement single-payer, Newsom seemingly softened his support. He told the San Francisco Chronicle in April that transitioning to a single-payer system would take “years,” and that the process would be delayed by setbacks and lawsuits.

“It is not an act that would occur by the signature of the next governor,” Newsom told the Chronicle. “There’s a lot of mythology about that.”

Fabien Levy, Chiang’s deputy campaign manager, suggested that Blue Shield is supporting Newsom and opposing Chiang “now that Newsom has tamped down expectations and said single-payer won’t easily be passed by the next California governor.”

According to a poll released this week by the Public Policy Institute of California, Newsom leads the gubernatorial race with the support of 25 percent of likely voters. Trailing behind him are Republican John Cox with 19 percent, Democrat Antonio Villaraigosa with 15 percent and Republican Travis Allen with 11 percent. John Chiang is polling in fifth place with 9 percent of likely voters, followed by Democrat Delaine Eastin with 6 percent.

However, the poll suggested that there’s room for some movement — 15 percent of those surveyed were undecided.

Under California’s “top-two” primary system, all candidates for state or congressional office will appear on the same June 5 ballot, regardless of party affiliation. The top two vote-getters advance to the November general election.

The big health care contributions to gubernatorial candidates were made through “independent expenditure committees.” Unlike the campaign committees run by the candidates themselves, which are subject to strict contribution limits, these independent committees can raise and spend unlimited amounts. They must report that spending to the California secretary of state on a regular basis, and, for big transactions in the weeks before the election, within 24 hours. 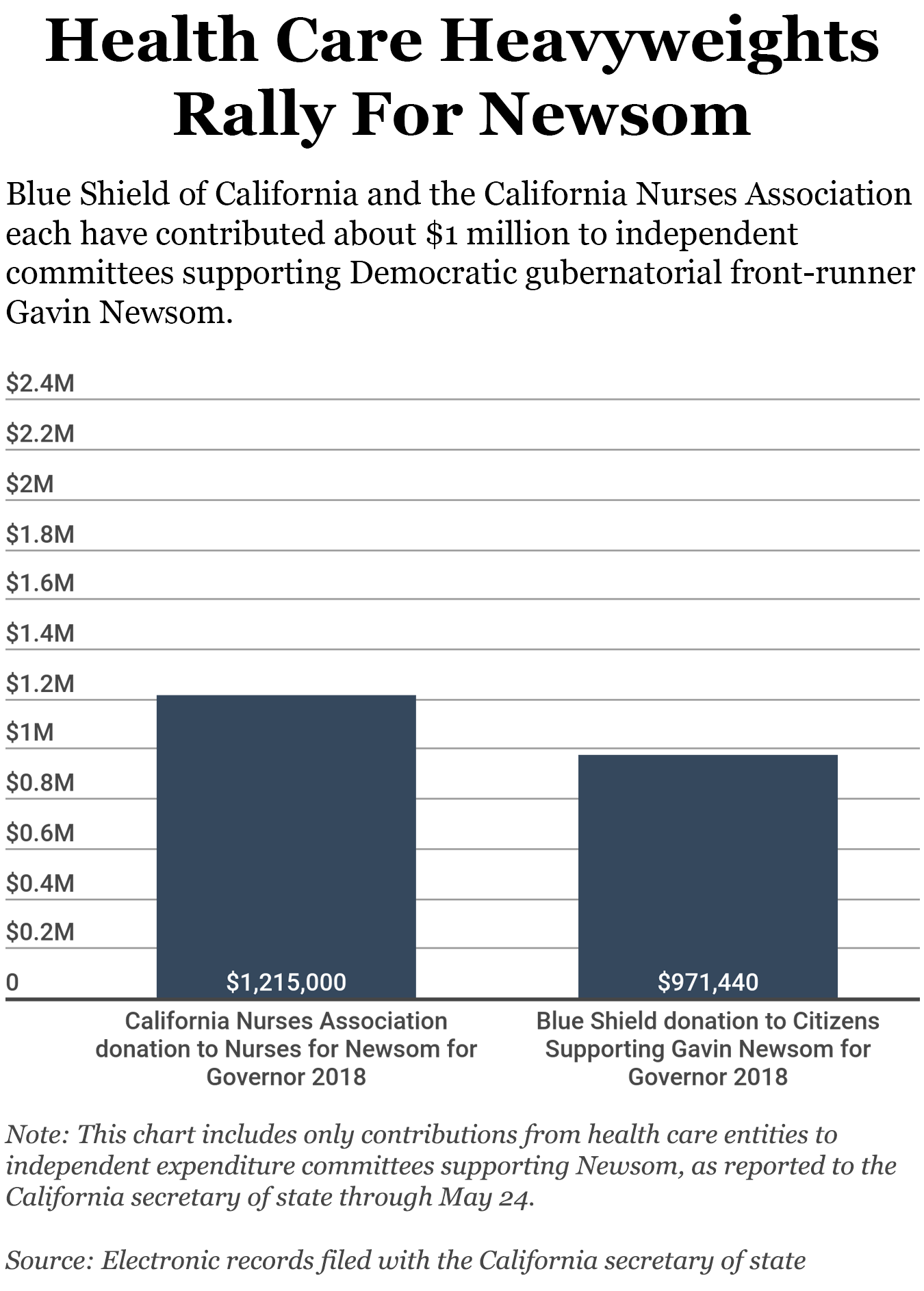 The nurses union, which sponsors the independent committee “Nurses for Newsom for Governor 2018,” has raised about $1.2 million for Newsom. It used $300,000 of that money to launch a statewide radio ad campaign last week supporting Newsom.

Chuck Idelson, spokesman for the union, said it is backing Newsom because of his support for single-payer. “It’s a major issue, there are 15 million Californians with no health coverage or who are underinsured” he said.

In an emailed statement, the insurer described its financial contributions as “part of our ongoing efforts to support meaningful reforms to health care at the state and federal level” without addressing single-payer directly.

Lanhee Chen, a fellow at Stanford’s conservative Hoover Institution, noted that Blue Shield and other insurers know they would have much to lose if single-payer were adopted in liberal-leaning California. By spending in the election, they expect to have greater influence in the policymaking process, he said.

“For the insurers, a single-payer system is more of an existential threat here in particular in California because of the political landscape,” he said.

Blue Shield has also loaned $1 million to a committee that opposes Chiang — one that has amassed $2.4 million in contributions, all from the health care industry. 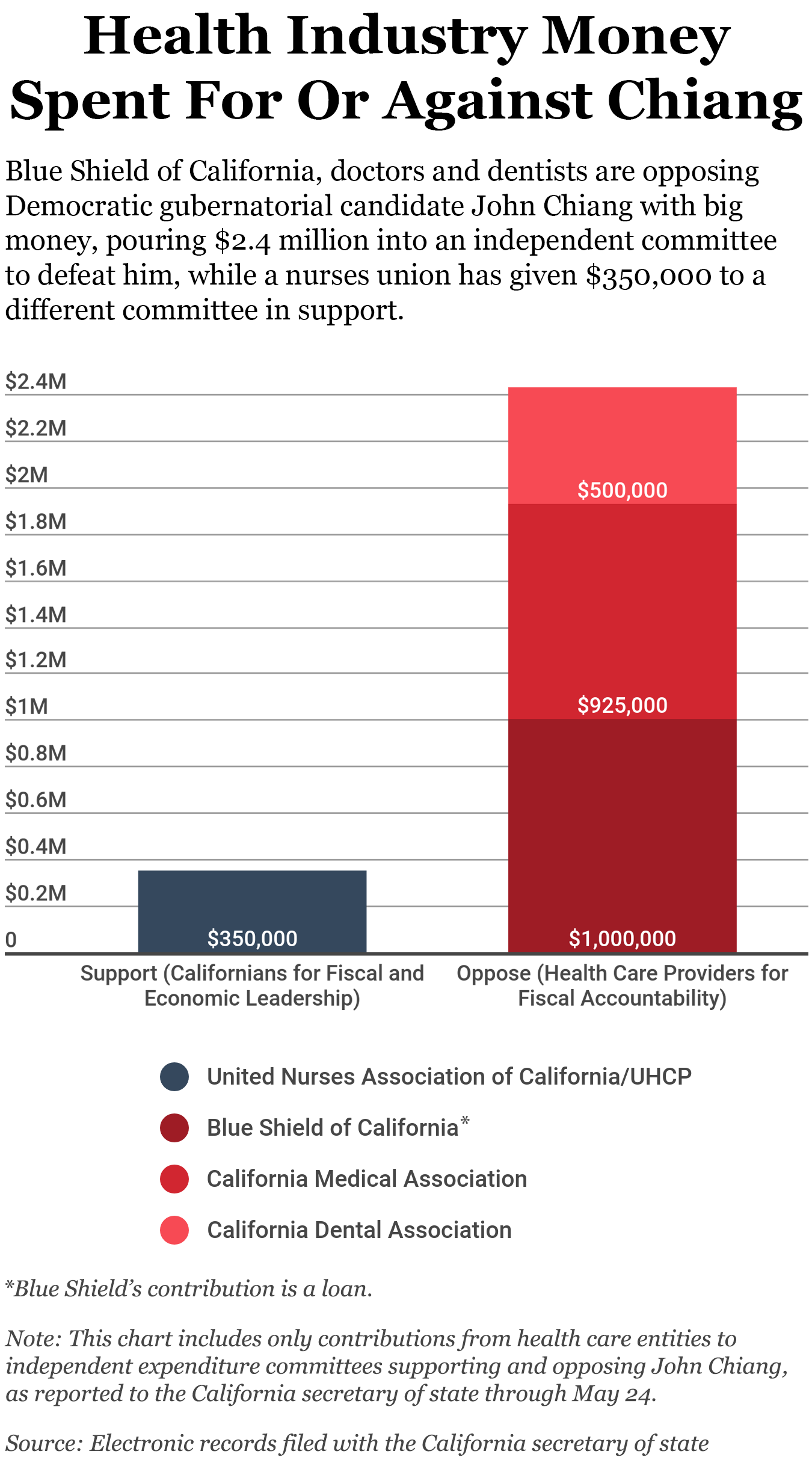 The committee has spent more than $1.8 million since April to oppose Chiang, including $1.5 million for glossy direct mailers that warn that he’s “a billion-dollar risk we can’t afford as our Governor.”

Chiang does have some health care support from a different independent campaign committee. The United Nurses Association of California/Union of Health Care Professionals has contributed $350,000 to a committee it formed called “Californians for Fiscal and Economic Leadership, primarily formed to support John Chiang for Governor 2018.”

Single-payer emerged as one of the hottest issues in California politics with the meteoric rise of U.S. Sen. Bernie Sanders (I-Vt.) in the 2016 presidential election — and his support for a government-run health care system he called Medicare for All, Kousser said.

But the policy faces significant political and financial hurdles, even in the Golden State.

SB 562, the single-payer bill that was considered by the state legislature last year, stalled because of its exorbitant price tag, estimated at $400 billion annually — with up to half of that money coming from new taxes.

Correction: The charts in this story have been updated to correct which of Blue Shield’s campaign donations was a loan.

By Harriet Blair Rowan and Alex Leeds Matthews May 25, 2018