It was not the centerpiece, but health was a persistent theme in President Donald Trump’s State of the Union address at the Capitol on Tuesday night.

Although the administration has focused more on issues of trade, taxes and immigration, the president laid out a series of health-related goals, including some that even Democrats indicated could be areas of bipartisan negotiation or compromise. Trump vowed to take on prescription drug prices, pursue an end to the HIV epidemic and boost funding for childhood cancers.

He also took a victory lap for goals promoted by his administration that had been accomplished. “We eliminated the very unpopular Obamacare individual mandate penalty,” he said, referring to the requirement in the Affordable Care Act that most people must have health insurance or pay a fine. It was eliminated as part of the 2017 GOP tax bill, despite backlash from critics that it could undercut Obamacare, after many failed attempts by Republicans to repeal the law.

And Trump noted congressional passage of a “right to try” bill that was supposed to make it easier for terminally ill patients to gain access to experimental medications, but so far few patients have been able to make the law work for them.

The most likely ground for bipartisanship will be the issue of drug prices, where Democrats are as eager as the president to do something to rein in prices that are spiraling upward.

“It is unacceptable that Americans pay vastly more than people in other countries for the exact same drugs, often made in the exact same place. This is wrong, this is unfair, and together we will stop it. We will stop it fast,” he said. “I am asking the Congress to pass legislation that finally takes on the problem of global freeloading and delivers fairness and price transparency for American patients.”

Democrats are cautiously optimistic on the drug price front. “I really am hopeful about making strides on prescription drug legislation this year on a bipartisan basis,” Wendell Primus, top health aide to House Speaker Nancy Pelosi, said at a conference for health policy researchers hours before the speech.

But not all of Trump’s claims Tuesday about his efforts on drug pricing stand up to close scrutiny. He proclaimed that “in 2018 drug prices experienced their single-largest decline in 46 years.” The drug-price portion of the consumer price index (CPI) declined slightly last year for the first time since 1972, but prices for many individual drugs are still rising sharply.

Factors beyond the administration’s actions appear to have played the biggest role in the overall slowdown. Drug price increases have slowed largely because patents have expired on expensive, blockbuster drugs and several years have passed since the introduction of expensive medicines to treat hepatitis C, according to independent analysts.

But even as consumer drug prices have moderated, drug spending per hospital admission soared 19 percent from 2015 to 2017, a study sponsored by hospital trade groups found last month. That includes anesthesia drugs, chemotherapy infusions and other medicines that are not counted in the CPI.

Some well-placed Republicans praised the drug price effort. “I expect deep-pocketed interests to oppose anything and everything to protect the status quo,” said Sen. Chuck Grassley (R-Iowa), chairman of the powerful Senate Finance Committee. “But the moment is ripe for action and Americans expect us to work together to get the job done.”

News organizations including Kaiser Health News have reported on dozens of cases of surprise hospital bills, unaffordable costs for life-sustaining drugs and other health-expense shocks for patients. Shereese Hickson, whose experience with a $123,000 bill for multiple sclerosis drugs was covered by KHN and National Public Radio, was watching the speech.

“I’m glad he mentioned it,” she said of Trump’s promise to bring transparency and competition to pharmaceutical prices. “But I would like to see if it really will come true. If you do that — that’s going against the drug companies. They’ll be losing money and they’re not going to let that happen.” 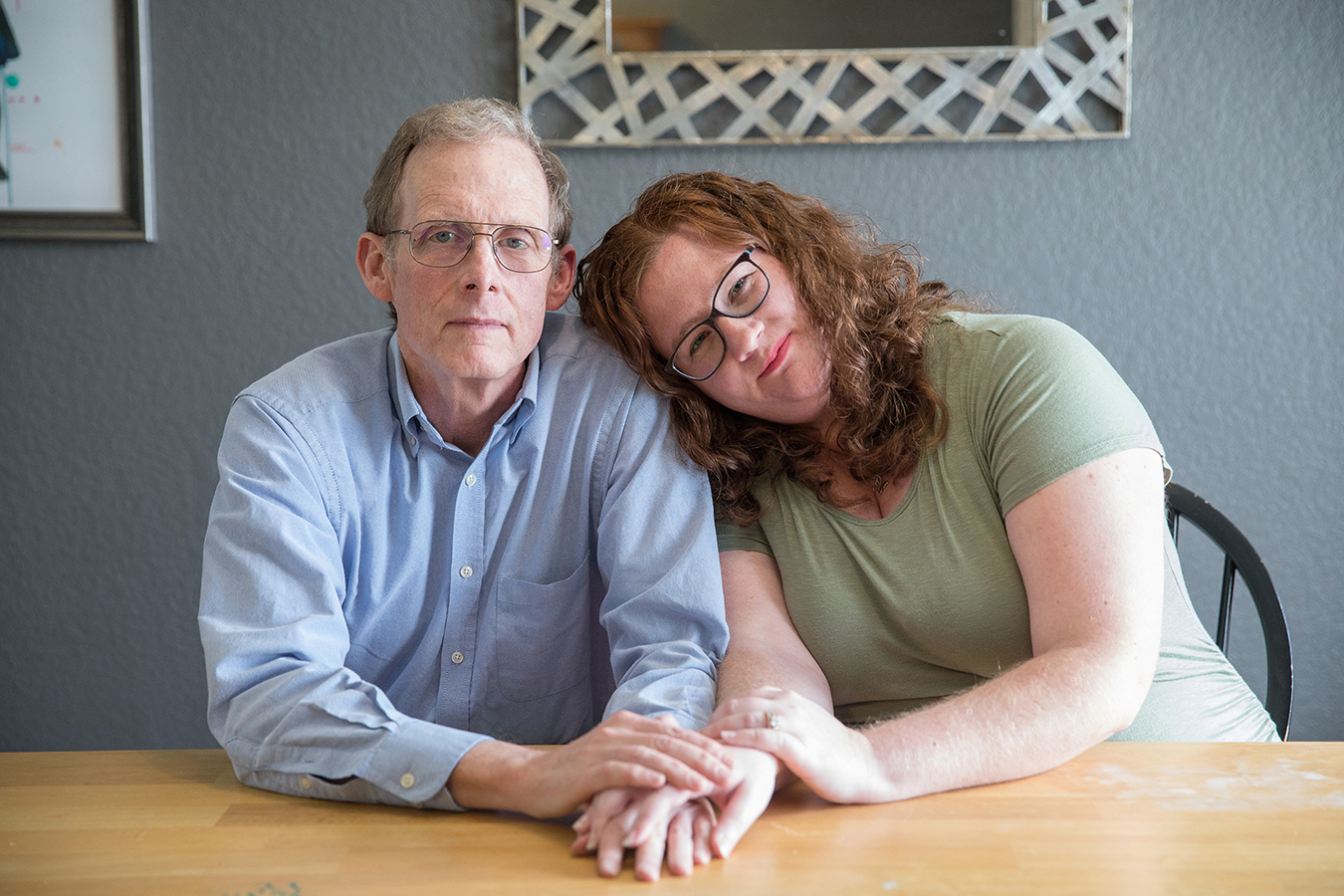 Elizabeth Moreno was billed $17,850 for a urine test. After Moreno’s insurer declined to pay any of the bill because the lab was out-of-network, her father, Dr. Paul Davis, paid the lab $5,000 to settle the bill.(Julia Robinson for KHN)

Paul Davis — a retired doctor from Findlay, Ohio, whose family’s experience with a $17,850 bill for a simple urine test was detailed in a KHN-NPR “Bill of the Month” feature last year and who met with Trump about surprise billing last month — said he was disappointed Trump did not go into further detail about his health care proposals.

“He didn’t say anything,” he said.

Davis said he would have liked to have heard more about the administration’s recently announced plan to eliminate drug rebates negotiated by middlemen in the Medicare drug program, as well as the recently implemented policy requiring hospitals to list their prices online.

“If he wanted to use the podium to talk about the wonderful things that he’s done, that’s one of the things he’s gotten accomplished,” Davis said.

In their official responses to the speech, Democrats were more combative. “In this great nation, Americans are skipping blood pressure pills, forced to choose between buying medicine or paying rent,” said Stacey Abrams, former Georgia House minority leader and a rising star in the national Democratic Party. “Maternal mortality rates show that mothers, especially black mothers, risk death to give birth. And in 14 states, including my home state where a majority want it, our leaders refuse to expand Medicaid, which could save rural hospitals, economies and lives.”

California Attorney General Xavier Becerra, who gave the Spanish-language Democratic response, reminded viewers that while the Trump administration is seeking to have the Affordable Care Act overturned in court, Democrats would provide “medical care for your family that no politician can take away from you.”

The son of Mexican immigrants, Becerra attacked Trump’s proposal for a border wall as not only immoral, but also illegal.

“Tonight was about convincing us that the deceit and dysfunction would stop and that cooperation would begin. What we heard was the same tired refrain of building walls,” Becerra said. But that’s not the only wall the administration is trying to build, he said.

“They are also putting a wall between our veterans and their medical services,” he added. “They are ready to waste millions of dollars on a border wall instead of helping our veterans who wait long hours to get into a hospital.”

Becerra has sued the Trump administration 45 times in the past two years, and leads a coalition of 20 states and the District of Columbia in defending the Affordable Care Act against a Texas lawsuit that could determine the fate of the law.

“In the courts or in Congress or at the polls, we have to fight for our agenda. That is why I have fought in court as attorney general, against the administration, and we are winning.”

In another outreach to Democrats, Trump vowed that his budget “will ask Democrats and Republicans to make the needed commitment to eliminate the HIV epidemic in the United States within 10 years. Together, we will defeat AIDS in America,” he said.

Groups that have been fighting HIV praised the promise.

“While we might have policy differences with the president and his administration, this initiative, if properly implemented and resourced, can go down in history as one of the most significant achievements of his presidency,” said Michael Ruppal, executive director of The AIDS Institute.

Trump also promised that his budget, which has been delayed by the recent government shutdown, will seek new funding to expand research into cures and treatments for childhood cancer.

He said he will seek “$500 million over the next 10 years to fund this critical lifesaving research.” The National Institutes of Health has long been a bipartisan favorite in Congress, although Trump in his first budget did seek cuts in NIH funding.

The one area in which bipartisanship will clearly not prevail is that of abortion. Trump reiterated a promise he made to anti-abortion groups as a candidate in 2016 and pushed for a federal bill to ban abortions after 20 weeks of pregnancy.

“Let us reaffirm a fundamental truth: All children — born and unborn — are made in the holy image of God,” he said.

Senate Republicans voted on such a bill in 2018; it failed to advance by a large margin. The bill still lacks the votes in the Senate, and the House now has a majority that supports abortion rights.

Abortion opponents praised the president’s comments. “Once again, President Trump has proved he is our nation’s most pro-life president ever and he is keeping his promise to the voters who fueled his victory,” said Marjorie Dannenfelser of the Susan B. Anthony List.

“Shame on the president for using the State of the Union to vilify people who have abortions and the providers who care for them,” said Megan Donovan of the Guttmacher Institute. “Make no mistake: This is part of a larger agenda to eliminate access to abortion altogether.”