Three-quarters of the public — including a majority of Republicans — want the federal government to protect patients from being stuck with surprise medical invoices after they are unwittingly treated by doctors or medical facilities that are out of their insurance network, a poll released Wednesday found.

These unexpected bills, which can be financially crippling, may arise when a patient is taken to the emergency room by an out-of-network ambulance; when the emergency room is not in their insurer’s network; or when their hospital is in their network, but a doctor or specialist within that facility who treats them is not.

Although insurers prohibit in-network doctors from billing more than the insurer agreed to, such bills occur because doctors and medical facilities that do not have such contracts are unconstrained from charging whatever they want. Often they charge list prices multiple times the amount insurers agree to pay.

In urgent medical circumstances, patients are rarely in a position to investigate the financial arrangements of their caregivers or make sure they are brought to a treatment center that works with their insurer. Often patients are not aware they were seen by an out-of-work provider until the bill arrives.

Four in 10 American adults under age 65 say that within the past two years they or a family member received an unexpectedly high invoice for a procedure, test or doctor’s visit they thought would be better covered by their insurer, according to the Kaiser Family Foundation poll. (KHN is an editorially independent program of the foundation.) Half of those people said the high bill occurred because the medical provider was not in their insurance network.

Some states have placed limits on what out-of-network doctors and facilities can charge or provided mechanisms for mediating the bills, but those protections do not apply to millions of Americans who receive their insurance through their employer. Policy forums and some members of Congress have discussed potential protections, such as limiting out-of-network payments in emergency care to a price that is a set amount above what Medicare pays.

The poll found between 76% and 78% of the public want the federal government to take action. Support among Democrats was between 88% and 91%, depending on the circumstance that led to the surprise bill, and Republican support ranged from 60% to 62%, the poll showed. 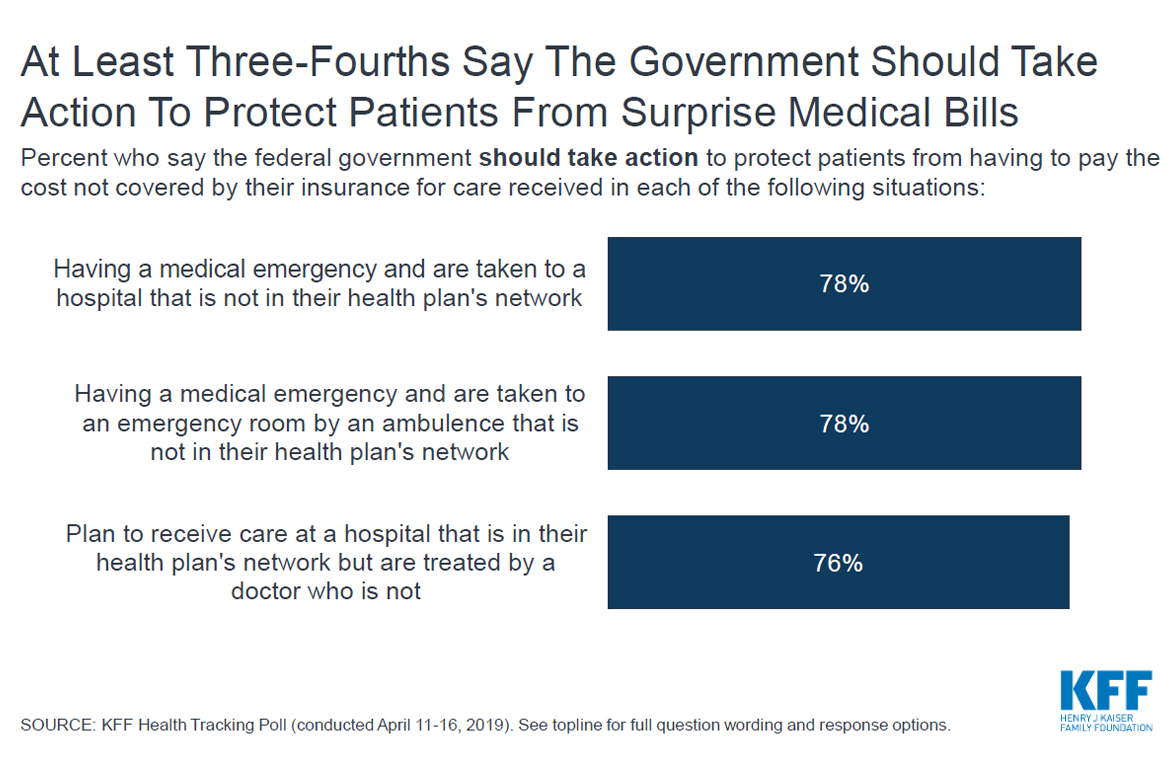 There is no consensus on who should eat the extra costs now borne by patients: 43% of the public said insurance companies should cover the extra costs from the bills, while 47% said doctors or providers should also be on the hook. Only 5% of the public said the provider alone should absorb all the cost, the poll found. Democrats were somewhat more likely than independents or Republicans to put the onus solely on insurers.

Half of the public categorized surprise billings as a top priority for Congress, but other health care issues draw even more support. The poll found 64% of the public said lawmakers should concentrate on protecting the Affordable Care Act’s guarantees that people with preexisting medical conditions can obtain insurance, and 68% gave precedence to lowering prescription drug costs.

Fewer than a third of respondents identified as a top priority either creating a “Medicare-for-all” insurance plan, repealing and replacing the health care law or increasing its financial assistance for people who buy policies on the marketplaces, the poll found.