This story is part of a partnership that includes WLRN, NPR and Kaiser Health News.

A green van was parked on the edge of downtown Miami, on a corner shadowed by overpasses. The vehicle serves as a mobile health clinic and syringe exchange, where people who inject drugs like heroin and fentanyl could swap dirty needles for fresh ones.

One of the clinic’s regular visitors, a man with heavy black arrows tattooed on his arms, waited on the sidewalk to get clean needles.

This mobile unit in Miami-Dade County is part of the IDEA Exchange, the only legal needle exchange program operating in the state. But Florida’s Republican governor, Ron DeSantis, signed a new law last week that aims to change that.

Needle exchanges have been legal in many other states for decades, but Southern, Republican-led states like Florida have only recently started to adopt this public health intervention.

The timing of the statewide legalization of needle exchanges comes as Florida grapples with a huge heroin and fentanyl problem. When people share dirty needles to inject drugs, it puts them at high risk for spreading bloodborne infections like HIV and hepatitis C. For years, Florida has had America’s highest rates of HIV.

Even so, Arrow said, he and every user he knew always put the drugs first. Clean needles were an afterthought.

“Every once in a while, I did use someone else’s and that was a thrill ride — wondering whether or not I was going to catch anything. But I’m blessed; I’m 57 and I don’t have anything,” Arrow told a reporter at the mobile clinic over a year ago.

Kaiser Health News agreed not to use his full name because of his illegal drug use.

“Now I can shoot with a clean needle every time,” he said.

According to the Centers for Disease Control and Prevention, needle exchanges prevent the spread of viruses among users of injection drugs.

But the advocates who want to offer needle exchanges face challenges. For example, carrying around loads of needles to hand out without prescriptions can violate drug paraphernalia laws.

Many states mapped out legal frameworks decades ago to allow needle exchanges as a public health intervention. But in Florida, it was illegal to operate exchanges. Then, in 2016, the state legislature gave Miami-Dade County temporary permission to pilot a needle exchange program for five years.

“This has become a roving triage and health center.”

In three years of operation, Miami’s pilot program has pulled more than a quarter-million used needles out of circulation, according to reports the program filed with the Florida Department of Health. By handing out Narcan — a drug that reverses opioid overdoses — the exchange has prevented more than a thousand overdoses. The program also offers clients testing for HIV and hepatitis C. Finally, the program connects people to medical care and drug rehab.

“We have made it so easy for people to get into HIV care now, and we have so many people who we never would have known were infected — and would have infected countless other people — who are on their medications,” said Dr. Hansel Tookes, who heads Miami’s needle exchange pilot program.

Tookes was in Tallahassee, the state capital, in May when the expansion bill passed its final vote — a long shot in the conservative-dominated legislature that nonetheless passed by an overwhelming margin. He said he spent the return flight home to Miami staring out the window.

“I looked down at Florida the entire ride,” he said, “and I just had this overwhelming feeling like, ‘Oh, my God, we just did the impossible and we’re going to save so many people in this state.'” 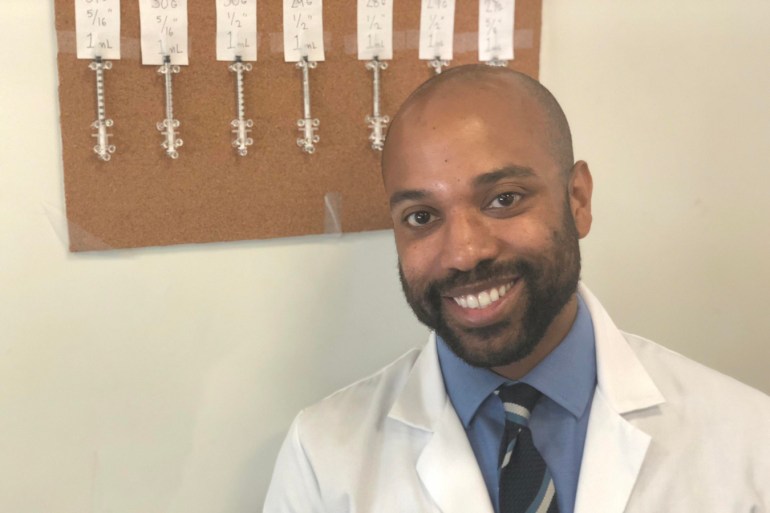 Dr. Hansel Tookes runs the only legal needle exchange in the state of Florida. (Sammy Mack/WLRN)

Six years ago, Republican state Sen. Rob Bradley cast a “no” vote after considering a proposal for needle exchanges.

“You’re trying to make sure the person has a clean needle, which is outweighing the idea of the person breaking the law,” he declared in 2013.

This is the primary objection of conservative lawmakers: the concern that these programs promote illegal drug abuse. Responding to this skepticism with data has been central to changing lawmakers’ minds.

Decades of research shows that needle exchanges do not encourage drug abuse, and that they lower other health risks for people who are vulnerable and often hard to reach. It’s part of a public health approach known as “harm reduction.”

In Miami, the needle exchange pilot project has also earned the support of law enforcement.

Officers say it’s a relief to know more injection drug users are keeping their syringes in special sharps containers, provided by the exchange, to safely dispose of dirty needles.

“Now, for our officers, when they’re doing a pat-down … that sharps container is really protecting you from a loose needle,” said Eldys Diaz, executive officer to the Miami police chief. “That’s an extraordinary source of comfort for us.”

This year, when Bradley heard discussion of the needle exchange bill again, he had a different response.

“I just want to say, when I started my career in the Senate, I voted against the pilot project — and I was wrong,” he said as he voted for the bill this time. “And the results speak for themselves. It’s very good public policy.”

Arrow Points To His Future

If it weren’t for the tattoos running down his arms, it would be hard today to recognize Arrow as the man who once slept under highway overpasses. His skin is now clear, and he has some meat on his bones. He looks healthier during a visit to a clinic where needle exchange clients get follow-up care, but it’s been a rough year.

In May of last year, Arrow’s girlfriend died from a heart infection — a serious condition that can happen to people who inject drugs. After that, Arrow said, he overdosed on purpose. Narcan from the needle exchange brought him back.

But he kept using.

Arrow said he doesn’t remember a lot from that period but does remember using so much heroin that he ran out of fresh needles between visits to the exchange. So he grabbed other people’s used needles.

And then he tested positive for HIV and hepatitis C.

Tookes and his colleagues threw Arrow another life raft: They got him an inpatient drug treatment bed.

Now Arrow sports a string of keychains from Narcotics Anonymous.

Arrow’s HIV is under control. And he connected with health services for people living with HIV, including getting medication that cured his hepatitis C.

Now, he’s focused on staying sober, one day at a time. He has been sober for about six months.

Tookes, Braynon and other supporters hope additional needle exchanges across Florida will give more people the chance to recover from addiction — and protect themselves from needle-borne illnesses.

This story is part of a partnership that includes WLRN, NPR and Kaiser Health News, an editorially independent program of the Kaiser Family Foundation.