Yuriana Aguilar made headlines last year when she became the first undocumented immigrant student to earn a Ph.D. from the University of California-Merced.

Now she’s in the midst of her postdoctoral fellowship at Rush University in Chicago, researching ways to help prevent sudden cardiac arrest, a leading cause of death in the United States.

She was able to pursue the fellowship only because of her participation in the federal Deferred Action for Childhood Arrivals (DACA) program, which allows young people brought to the U.S. by their parents without proper documentation to stay and work here.

Aguilar, 27, was born in Mexico and arrived with her family in Fresno at age 5.

But her research could be cut short if President Donald Trump’s administration follows through on its pledge to end the DACA program.

It’s ironic “that my research could eventually help save the lives of people who are altering my life,” she said, referring to members of Congress, many of whom are at an age when the risk of heart disease is higher.

“I would ask [Congress] to look at … how much we’ve accomplished these past five years,” Aguilar said. “We’re not taking anyone’s job, we’re simply filling in the gaps.”

She is among an estimated 220,000 DACA recipients in California, the largest contingent in the country. Overall, there are about 800,000 children and young adults with DACA status, which offers them temporary protection from deportation and the ability to receive work permits. Former President Barack Obama established the program in 2012 via executive order.

There are no firm statistics showing how many of these immigrants, known as “Dreamers,” work in the health care sector, but industry leaders have suggested that ending DACA could have a significant impact, especially among medical students and home health aides.

“The implications of this action for medical students, medical residents and researchers with DACA status are serious, and will interfere with their ability to complete their training and contribute meaningfully to the health of the nation,” the Association of American Medical Colleges (AAMC) said in a prepared statement.

Robert Espinoza, vice president of policy at PHI, a long-term care advocacy group, said terminating the program could have major consequences for the health care workforce. “The more the administration threatens immigrants and their families and their communities, the more we threaten that workforce supply,” he said.

On Sept. 5, Attorney General Jeff Sessions announced that President Trump would cancel the executive order that created DACA. The administration said it did not believe Obama had the authority to set up the program and that it anticipated lawsuits from states seeking to end it.

The administration is providing a six-month grace period before these protections end, giving Congress time to pass legislation to address the legal status of Dreamers. Trump and Democratic lawmakers have agreed to work on a plan to extend the DACA program, but there are few details, and conservatives have raised concerns.

One of the plaintiffs, a childhood immigrant from Thailand, is now a fourth-year medical student at the University of California-San Francisco who fears that ending DACA could also end his “dream of becoming a doctor and providing care to underserved and unprivileged communities,” according to the lawsuit.

About 20 states and the University of California system already have mounted legal challenges.

Foreign-born and international medical graduates tend to work in underserved areas, said Matthew Shick, director of government relations and regulatory affairs at the AAMC. Phasing out DACA could sever a lifeline connection between doctors and populations in desperate need of health care, he said.

Karla Ornelas plans to become a family medicine physician and work in California’s Central Valley, where there is a great need for doctors, especially bilingual doctors.

Ornelas, 20, is a junior majoring in psychology and biology at the University of California-Davis. She was born in Mexico and came to the U.S. at age 9. 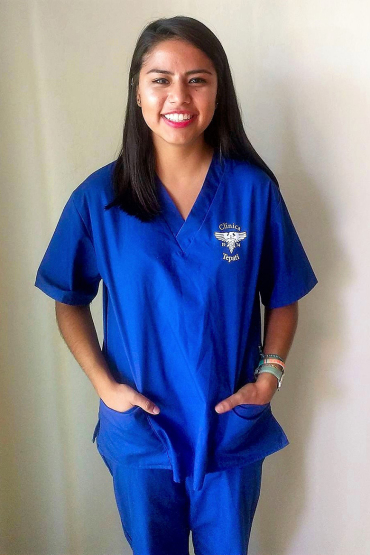 Karla Ornelas is a third-year pre-medical student at the University of California-Davis who registered for the DACA program. Her goal is to become a family medicine physician and return to the Central Valley. (Courtesy of Karla Ornelas)

Ornelas recently accompanied her mother to a doctor’s appointment, as she usually does to help translate. Her mother had questions about lab results, and as her mother asked in Spanish and Ornelas repeated in English, the doctor grew impatient, told them to stop asking questions and walked out of the room, she said.

“My mom wanted to cry, and I was shocked,” said Ornelas, who grew up in Turlock, Calif. “That’s when I realized that it wasn’t just my mom, it was an entire community that was relying on this doctor for health care.”

It’s not clear if there are any Dreamers practicing medicine, given the demographic group’s age. They were required to be younger than 31 at the time of Obama’s executive order, said Kurt Mosley, vice president of strategic alliances for Merritt Hawkins, a physician recruitment company.

But 65 Dreamers were enrolled in medical schools across the nation during the last academic year, Shick said.

DACA’s termination could also impact the country’s ability to care for patients in a culturally sensitive manner, Mosley said. Statistics point to the need: Minorities are expected to constitute the majority of the U.S. population by 2044, according to the U.S. Census Bureau. By 2060, Hispanics — who make up the bulk of Dreamers — are expected to account for nearly 29 percent of the population.

“You know we’re a nation of diversity, and our workforce should reflect that,” Mosley said. “And [dissolving DACA] is a step backwards.”

Jennifer Rodriguez, 28, said she frequently sees the need for diversity at a psychiatric care facility in Elkhart, Ind., where she works as an administrative assistant.

Latino clients often approach her for help, recognizing a friendly face and asking in bits of broken English whether she speaks Spanish.

Interpreting for clients doesn’t fall under her job description, and her boss sometimes tells her to say no when she’s overwhelmed.

“But I would never do that to my people,” said Rodriguez, who arrived in Goshen, Ind., from Mexico when she was 3, and has no recollection of her birthplace.

“This is all we know, and we just want to be productive citizens,” she said. “It’s hurtful that I consider this my home, yet to other people I am an illegal.”

By Ana B. Ibarra and Carmen Heredia Rodriguez September 18, 2017