LOS ANGELES — Instrumental string music filtered into the sprawling multipurpose room, where a dozen people rolled their hips, stretched their arms and twisted from side to side. Nearby, small groups of women huddled over elaborate needlepoint embroidery while men and women shuffled dominoes and mahjong tiles at game tables.

A crowd formed outside an adjoining room of the AltaMed Program of All-Inclusive Care for the Elderly (PACE) center in Chinatown, where several seniors, some using canes, walkers and wheelchairs, lined up in chairs. They chatted excitedly in English and Spanish about Tuesday’s upcoming presidential primary.

Sen. Bernie Sanders of Vermont — “el viejito,” an endearment for “old man” — was a favorite among the Spanish speakers. 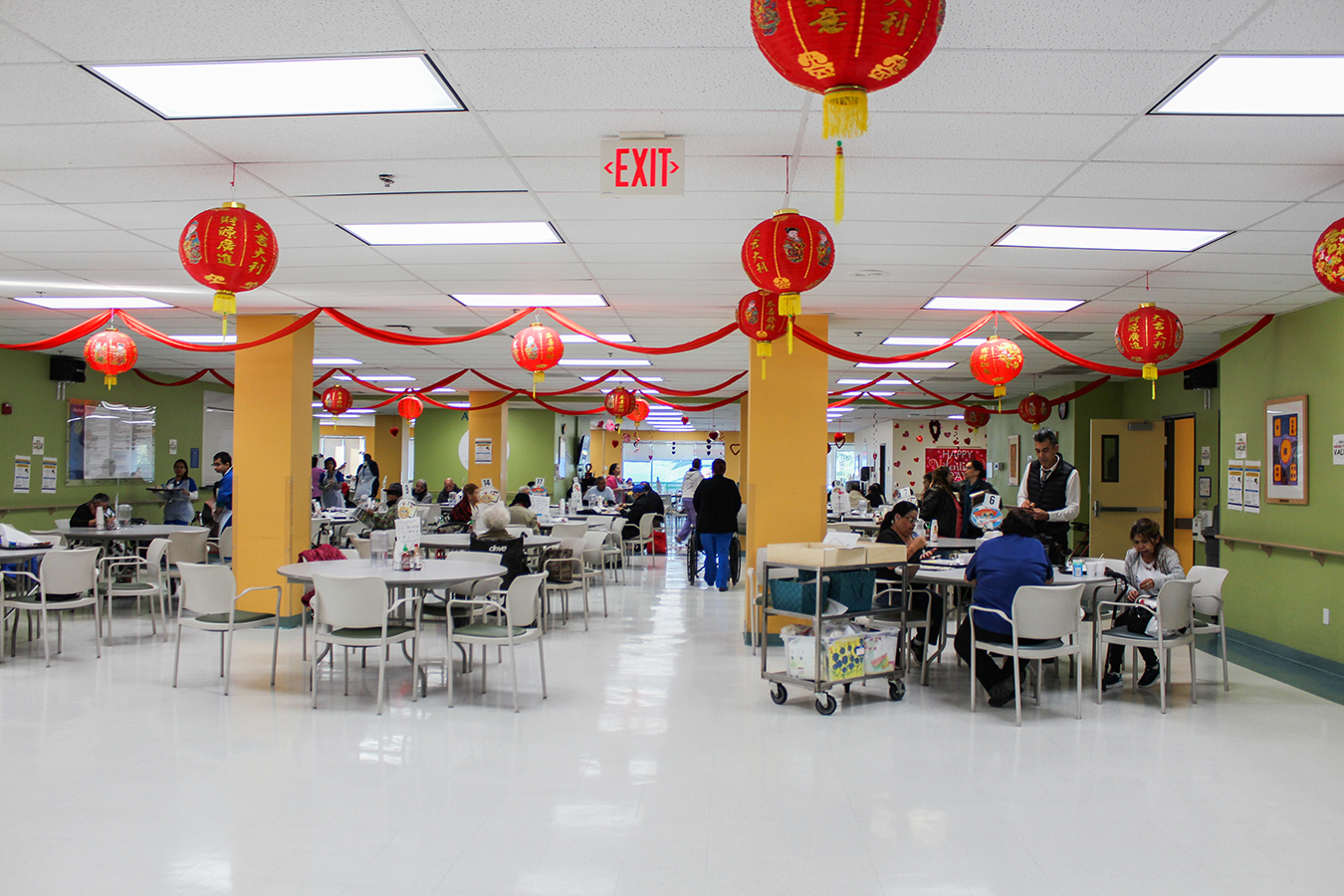 The multipurpose room is the hub of activity at the AltaMed PACE center in L.A.’s Chinatown.(Anna Almendrala/California Healthline)

The adult day care center, intended to keep frail and infirm older adults out of hospitals and nursing homes — and in their own homes for as long as possible — is one of 41 locations in Los Angeles County bringing new voting machines to groups of people with historically low voter turnout. The customizable touch screens allow voters to read a ballot in 13 languages, adjust the screen contrast and text size, and more.

During the 10 days before Super Tuesday, the machines have been rotating through various nonprofit organizations, jails and elsewhere — up to two machines per location, and usually for one-day stints — in an effort to reach people with disabilities, the incarcerated, the homeless and older adults. 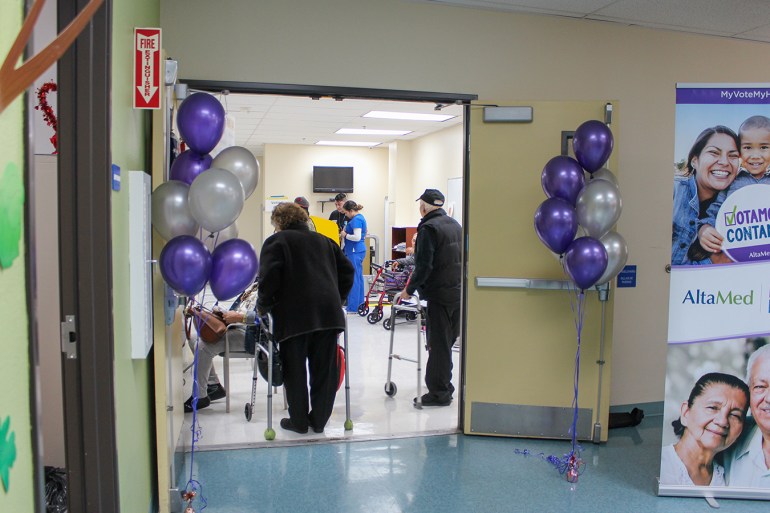 The voting room at the AltaMed PACE center in L.A.’s Chinatown was flanked by purple and silver balloons on Monday. (Anna Almendrala/California Healthline) 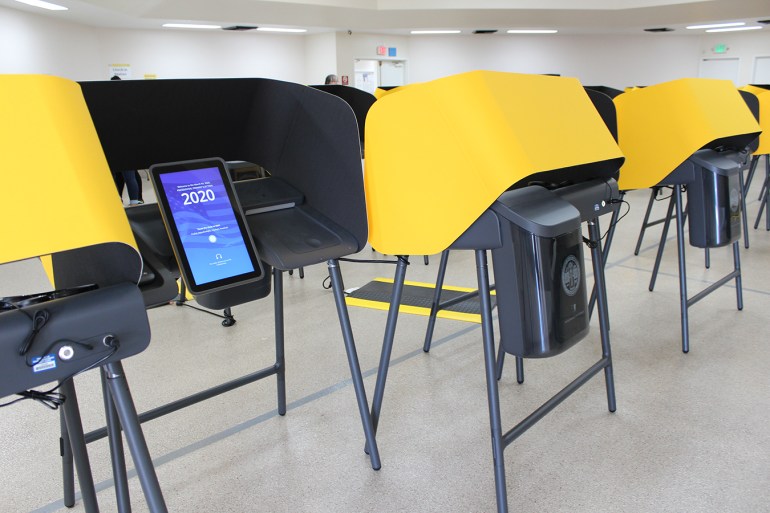 Some election experts are raising the possibility that these efforts may merely shift where and how people are voting — instead of increasing voter turnout. But at the AltaMed center in Chinatown, the mobile voting machines drew both new and repeat voters.

Both women, who met at the center and have been friends six years, are from El Salvador. They use walkers because of knee pain, they said, and couldn’t walk more than a block because they feared falling. 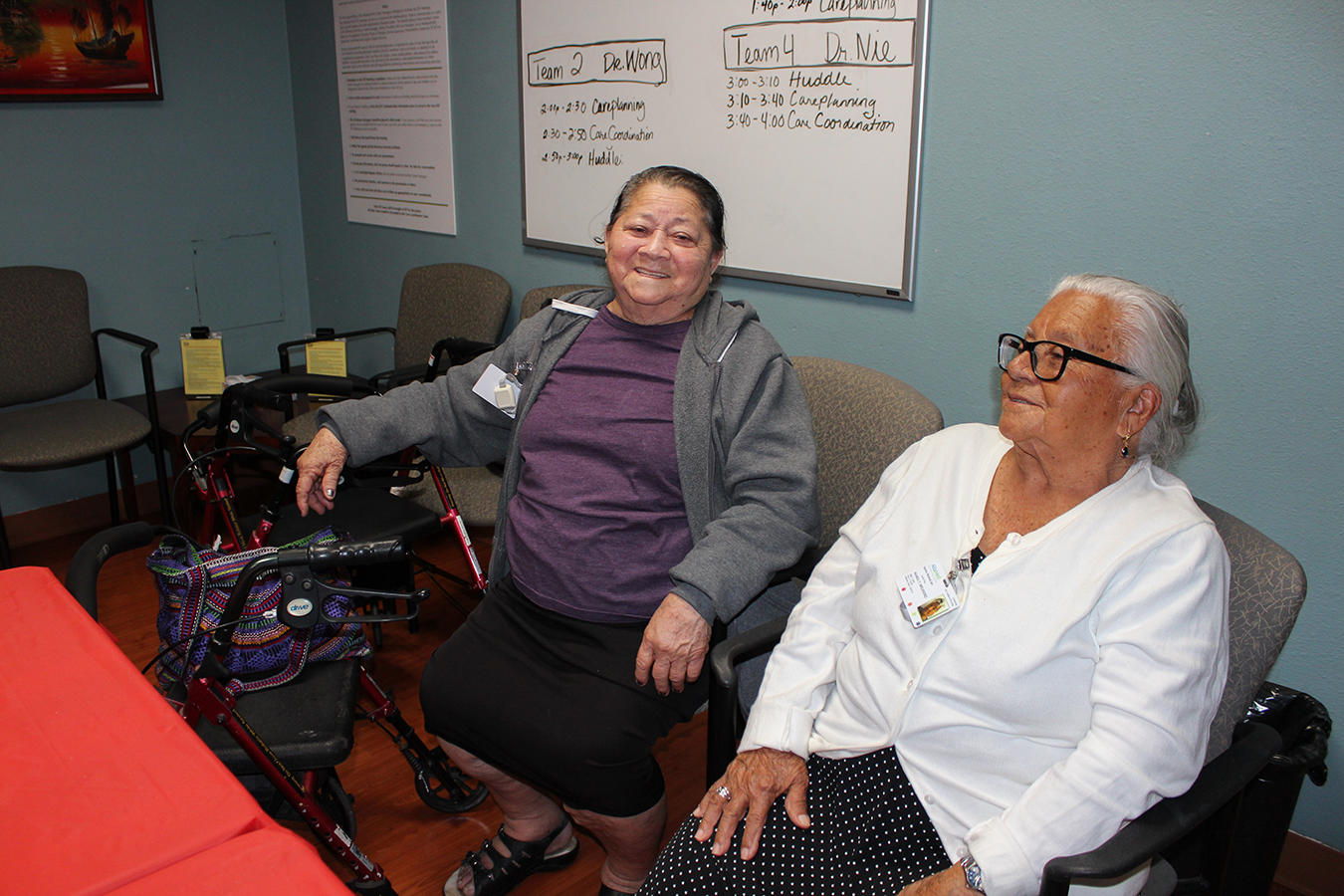 Alicia Turcios and Maria Melendez voted for the first time at the AltaMed PACE in Chinatown, an adult day care center located in Los Angeles. The two have been friends for six years, and both use walkers because of knee pain.( Anna Almendrala/California Healthline)

Melendez became a U.S. citizen about 15 years ago but said she has never voted because she has been in and out of hospitals or homebound during elections. Turcios became a citizen three years ago.

“It was special,” Melendez said in Spanish. “I can’t walk, and here an opportunity arrives.”

Melendez identifies as Republican but left the presidential choice blank. “The truth is that I’m happy, and the current government gives me what I need,” she said.

Turcios, a Democrat, said she voted for Sanders, “el viejito,” mostly because he seemed to be the front-runner.

“I had seen on the television that he was winning by a lot in Las Vegas,” she said.

Los Angeles County is modernizing its elections in several ways, as are 14 other counties participating in the state’s Voter’s Choice Act election system. Adopted in 2016, the law allows counties that have met requirements to replace assigned neighborhood polling places with voting centers open to all registered voters in the county, starting 10 days before Election Day.

The law also requires all participating counties to mail ballots to registered voters (although Los Angeles is exempt from this rule the first four years), as well as provide ballot drop-off locations 28 days before Election Day.

Although several other counties began adopting this election system two years ago, Super Tuesday marks the debut for the state’s most populous county, which has about 5.4 million registered voters. 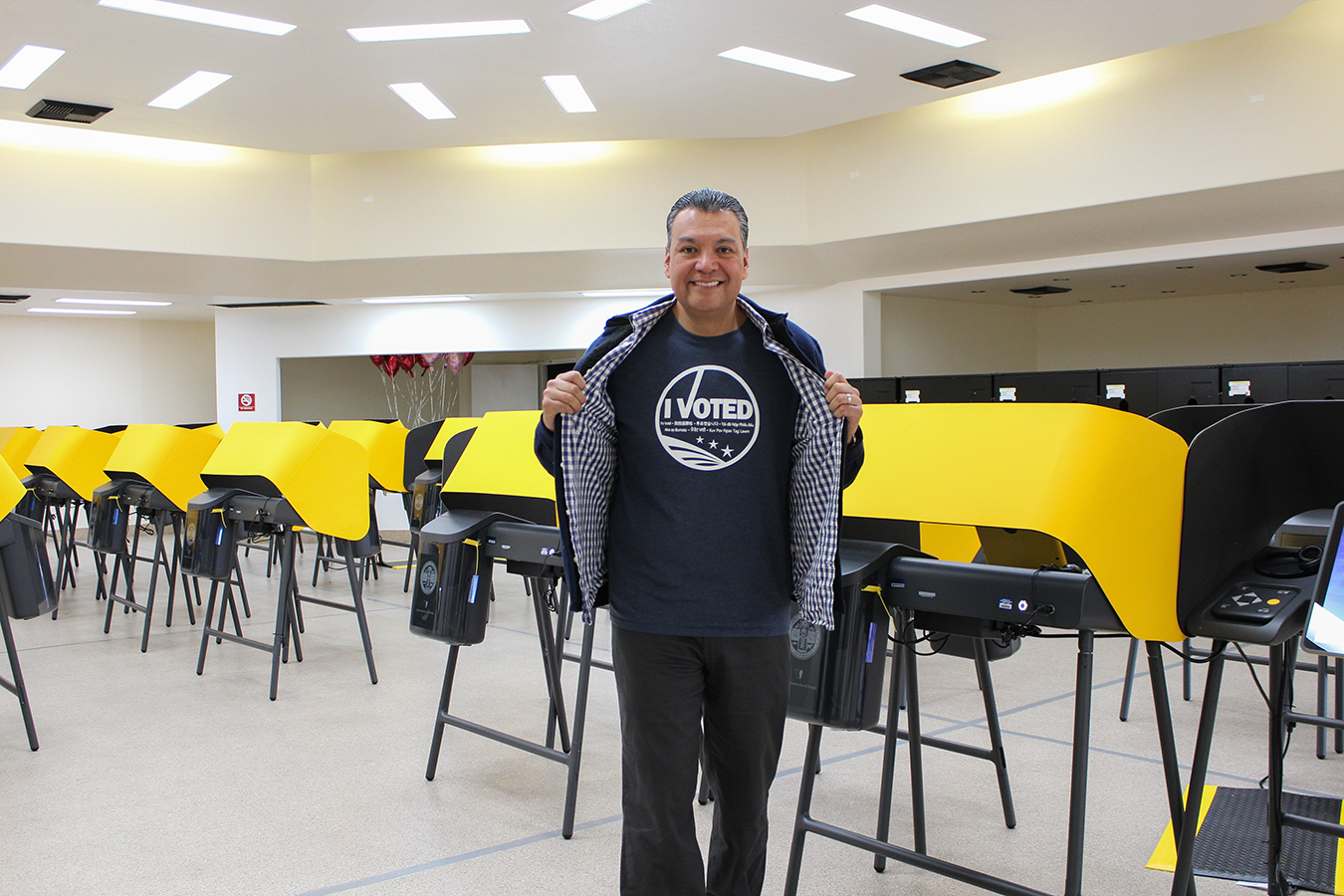 The long lead time makes voting easier for people of all abilities, said California Secretary of State Alex Padilla, after casting his vote in Mission Hills on Saturday, the first day of early in-person voting.

Mobile voting is not new in California. Counties also use traveling machines to attract voters in areas with high foot traffic, such as zoos and theme parks, and give rural voters in remote locations a chance to cast their ballots in person.

Los Angeles County wanted to take it a step further by teaming with nonprofits to bring the machines to people who could benefit the most.

For instance, AltaMed operates eight PACE adult day care programs in Los Angeles County, and the machines will make an appearance at all of them. Of the nearly 2,800 participants, 84% are Hispanic and all struggle with chronic diseases or disabilities.

Turnout among eligible black, Asian and Latino voters is also historically low. In the 2016 presidential election, turnout for Latino voters was 47.6%; for Asian voters, 49.3%; and black voters, 59.6%, while white voters showed up at a rate of 65.3%. (Latinos can be of any race.)

But it’s too soon to say whether these programs will increase turnout.

“Are you providing something that would just switch people from one method to another, or are you actually increasing voter turnout?” asked Kruse, a professor specializing in disability research at the Rutgers School of Management and Labor Relations.

Mindy Romero, director of the California Civic Engagement Project at the University of Southern California, said she hopes counties will study whether these programs attract hard-to-reach voters.

At midday, the voting machines sat unused. One woman entered, read a voter guide and decided she needed more time to do her homework.

But this doesn’t mean the effort was a waste, Kruse said.

“The cost of getting these 15 voters, that doesn’t concern me,” he said. “That’s democracy. We want to get people to vote.” 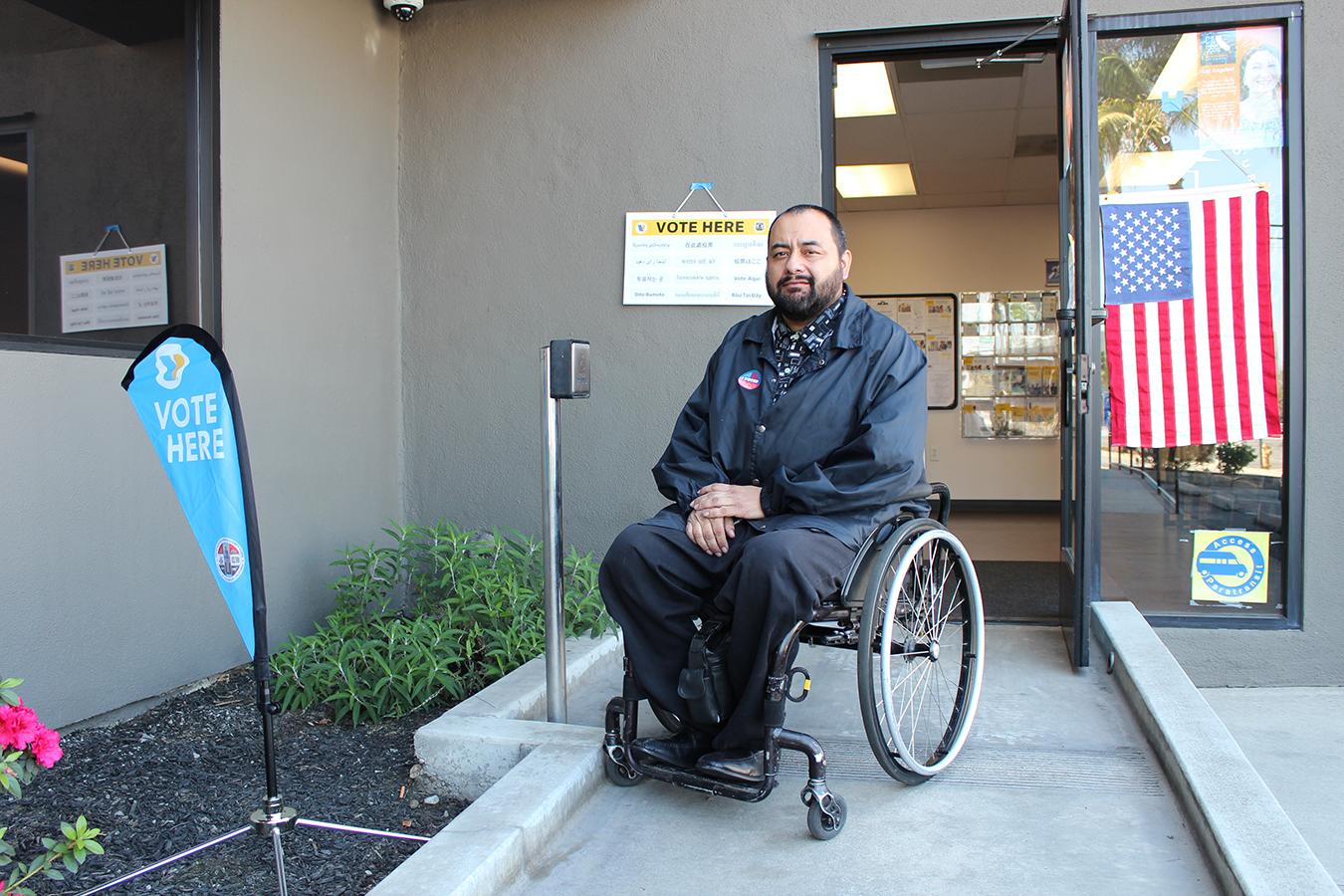 Richard Hernandez used the new voting machines at the Disabled Resources Center in Long Beach, where he works as an advocate. He said the machines were user-friendly and accommodated his wheelchair.(Anna Almendrala/California Healthline)

Two of the voters were staff members, including Richard Hernandez, 46, the organization’s legislative advocate.

Hernandez has been unable to walk or stand since a car accident damaged his spinal cord 26 years ago. He has always voted by mail because his disability made it difficult to travel to new polling places. When he learned his organization would offer the touch-screen voting machines, he wanted to try it.

“The machines are really user-friendly, and they’re low enough for the wheelchair,” said Hernandez, who cast his vote for Sanders. “I was able to go up to the machine and vote for who I wanted to vote, with no assistance whatsoever.

“I liked it because it gave me a sense of being so-called normal.”